The overland gateway (Gyirong Port) between Nepal and Tibet is open to foreign travelers, which makes a Nepal Tibet trip much easier. Plan your Nepal Tibet tour now! >
We are very good at designing ideal travel experience of your own in Tibet based on your personal requirements and intrests.
You are here: HomeTravel GuideAbout TibetTibet BuddhismHow to Prostrate

What is Tibetan Buddhism Prostration

Tibet is a Buddhist holy land that most of the Tibetans and devoted Buddhists, so in Tibet you can see numerous Buddhists doing pilgrimage. Pilgrimage is a traditional practice to accumulate merit and good fortune. The lay practitioner might go on pilgrimage for purifying defilements and conceit, curing an illness, winning a better rebirth, ending spate of bad luck or as thanks for an answered prayer. It is practiced as a devotional exercise in by Tibetans in different methods, two most popular methods including turning prayer wheels while walking to or around the religious sites, and making prostration. Prostration has been raised to a level of particular importance in Tibet. Tibetan Buddhists believe that prostration can fully purify their mind and help them earn a better life.

How to prostrate with correct way? 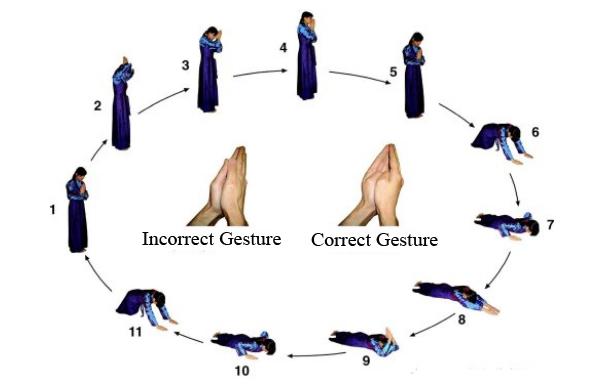 The correct prostrating way can be divided in to 11 detailed steps.

1. With a pray gesture, stand up facing the monastery, chapel, or the front, then put your feet together , but not too close to keep balance.

2. Keep the praying gesture and raise your hands up above your head.

3. Touch your hands down to your brown.

4. Go on touching your hands down to your nose.

5. Get your hand back to your chest and be ready for prostrating.

6. Bend your waist facing the ground.

8. Stretch your arms to the front and put your hands together to make a praying gesture again. For short and long distance prostration, you need to make a sign on your hand position when your arms stretch out. Because you need to walk to the sign and begin another one after you finish this prostration.

9. Keep your legs fold and put up your forearms above your hands.

10. Withdraw your hands and prop on the ground again.

11. Then stand up and prepared for the next prostration.

Buddhists believe one should prostrate at least 10,000 times during his lifetime. There are several popular Buddhist sites to prostrate or kora, four most important ones are Jokhang Temple, Bharkhor Street, Mount Kailash and Lake Manasarovar.

● Jokhang Temple. As the spiritual center of Lhasa hosing the honored Life-sized Statue of Shakyamuni at his age 12, Jokhang Temple square is filled with pilgrims every day. Because pilgrims’ long times of prostration, some flagstones at the entrance of Jokhang Temple were polished. In the square of Jokhang Temple, you are able to savor the strong smell of yak butter and listen to the murmur of scriptures. Climbing up to the golden roof delivers you a marvelous view.

● Barkhor Street. Barkhor Street is the most famed pilgrim circumambulation With long streams of devoted Tibetan pilgrims walking clockwise and chanting prayers, Barkhor Street shows a thick fragrance of Tibetan Buddhist culture. Many pilgrims perform full prostrations to the hand-polished stone day and night. There are also many shops lined in Barkhor Street, many travelers also come here to appreciate Buddhist atmosphere as well as purchase some local souvenirs.

● Mount Kailash. Mount Kailash in Ngari has long been a lodestone to many religious pilgrims and adventurous travelers. It is “center of the world” worshiped by four influential religions, including Bön, Buddhism, Hinduism, and Jainism. Every year, there are countless pilgrims from different corner traveling far to kora and prostrate around Mount Kailash. In addition to its religious status, the natural view of Mount Kailash is superb. Ordinary travelers are also recommended to take a trekking along this holy mountain. 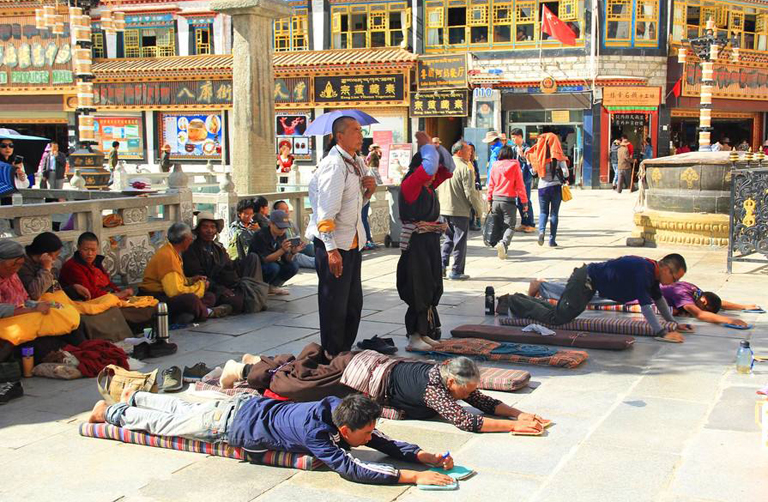 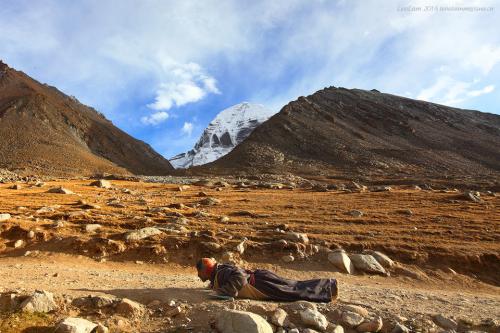 One Tibet prostrated around Mount Kailash 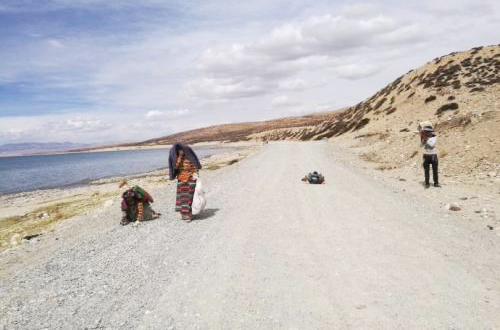 Are you a Buddhist believer or a Buddhism fan? We provide several tours to explore the Buddhist culture in Tibet and Nepal, please check following tours. If you want more, feel free to contact us and our travel constant can tailor-made a tour according to your needs.

Tibet has too much to offer. And our aim is to bring you the best experience in Tibet. Following are some other recommended Tibet tour packages that you may be interested in. All of our Tibet tour packages are customize to meet your personal requirements. You can also contact us to customize a trip if you want or check more. Check more >Tibet Tours