Why Taking a Train to Tibet So Popular?

Every day, the diligent Tibet trains unload about 2000 tourists to the holy city Lhasa from different cities around China. What makes so many travelers flock into Tibet by train?

So far, there are 7 gateway cities which run daily or weekly trains to Lhasa, including Beijing, Shanghai, Chengdu, Guangzhou, Chongqing, Lanzhou and Xining. Travelers can also board the train at the midway stations, such as Nanjing, Xian, Taiyuan, etc. Even though there are 7 train routes to Tibet, the train tickets still sell out very quickly, especially during summer and holidays. The Soft Sleeper is very hard to book because each train has only 76 sleepers of its kind. But it is strongly recommended to take a Soft Sleeper because you may have to stay two nights on the train if you depart from Beijing, Shanghai, Chengdu, etc. So you’d better book the train ticket as early as possible. According to the policy at present, one can book the ticket up to 30 days in advance.

A new Tibet Train operation diagram has started to carry out since end of 2017. With no trains are increased or reduced, there are 5 trains change the arrival time to Lhasa and 7 trains adjust the departure time off Lhasa. And total travel time of all Tibet Trains is decreased. Chengdu, Chongqing has already changed the departure time to Lhasa from afternoon to late evening. Now riding duration between Chengdu, Chongqing and Lhasa take about 36hrs, 7 hours shorter than before, and ticket fares also get a little cheaper. Read more details >>

According to China National Railway Administration’s regulation, foreigner travelers need a Tibet Travel Permit to take a train to/off Tibet. The permit is firstly required for booking train tickets at railway station or branch offices, then needed for checking in at railway station. The photocopy of the Permit is also available if you board the train from Beijing, Chengdu, Shanghai, Xining and Guangzhou. Xian, Lanzhou and Chongqing require the original permit. The Permit can't be applied by foreign travelers individually, and needs about 15~20 days to be obtained from Tibet Tourism Bureau. more>>

Currently there are 7 major train routes connecting Lhasa with gateway cities in China, including Beijing, Shanghai, Chengdu, Guangzhou, Chongqing, Lanzhou and Xining. Travelers can also board the train at the midway stations, such as Nanjing, Xian, Taiyuan, etc. Among the 7 gateway cities, Beijing, Chengdu, Shanghai are most popular because they are not only important international transfer hubs but also full of famous attractions. Xining is also recommended strongly because it is the nearest city to Lhasa by train, and you can stay there for one or two days to acclimatize the high altitude before arrival at Lhasa. 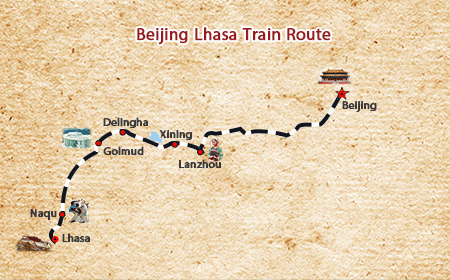 Train to Lhasa from Beijing, the capital of China

Beijing is the most popular International arrival city in China. Once arriving at Beijing, you can directly take a train to Lhasa from Beijing. As the starting city, it is easier to obtain a train ticket. The railway distance between Beijing and Lhasa is as far as 3757km, stretching from the lower northern China to the high plateau of Tibet and crossing 8 provinces and more than 30 cities, which make the Beijing Lhasa Train as a traversing journey to experience China’ diverse landscape and culture. Learn more details about Beijing Lhasa Train. 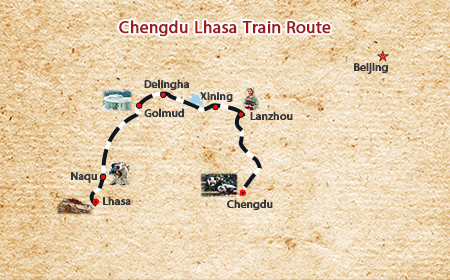 Train to Lhasa from Chengdu, the easiest access to Tibet.

With developed transportation network, Chengdu is well linked with many international cities and domestic cities in China. Before travel to Tibet, you can take a short stop to visit the adorable pandas as well as experience the slow-paced life in the city. As the departure station of Z322/Z323, it’s much easier to book a train ticket and get a comfortable soft sleeper in Chengdu. It usually takes about 36 hours to get to Lhasa by train from Chengdu. Check the detailed information about Chengdu Lhasa Train. 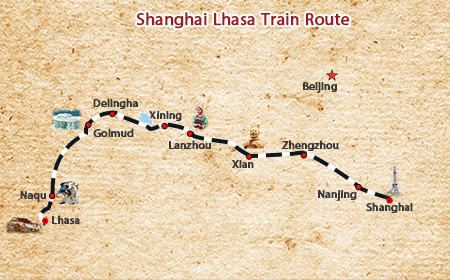 Train to Lhasa from Shanghai, the biggest city of China

The Shanghai Lhasa Train has to run as far as 4373km (2,717 miles) from eastern China to far western China. It takes about 47 hours to travel between Shanghai and Lhasa by train. There is a daily train guaranteed for both Shanghai to Lhasa route or Lhasa to Shanghai route. You don’t have to wait another day. If you travel Shanghai with Tibet by train, you will have a wonderful contrast experience – modernity and spiritual land...Check the detailed information about Shanghai Lhasa Train. 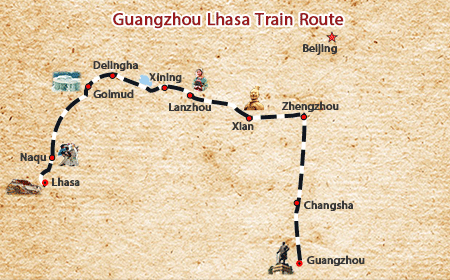 Train to Lhasa from Guangzhou, the southern prosperous city in China

Guangzhou has operated train to Tibet from many years. The railway connecting Guangzhou and Lhasa covers a distance of 4,980km, China’s longest railway at present. It takes 55 hours to get to Lhasa from Guangzhou. During the long journey, you will pass through six provinces (Tibet and Guangdong excluded) and take a vast view of the distinctive scenery in China. Of course, you won’t miss the incredibly picturesque landscape along Tibet-Qinghai Railway. For travelers who make Hong Kong or China southeastern citiesas their arrival city in China, Guangzhou is absolutely a wonderful hub for a Tibet train trip. You will experience more than expected in the 4980km's train journey. Check the detailed information about Guangzhou Lhasa Train. 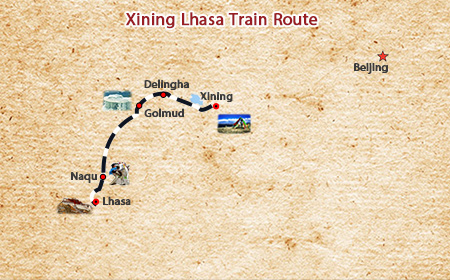 Xining is the closest inner mainland China city to Tibet as well as known as the starting point Qinghai Tibet Railway. There are many travelers usually getting to Xining first for a short visit and acclimation, then board a train to Tibet. It costs less time (only about 21hours) and money (soft sleeper around CNY 780) for a Xining Lhasa train journey compared with Beijing Lhasa train, Shanghai Lhasa train, Chengdu Lhasa train and other routes. Check detailed information about Xining Lhasa Train. 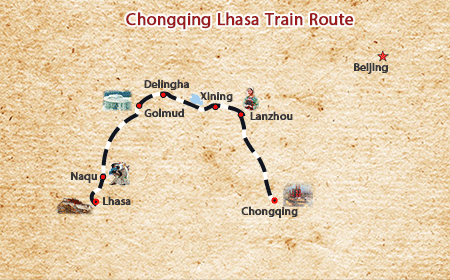 If you want to take a train to Lhasa, Chongqing is also a good idea. In every other day, there is a train running between Chongqing and Lhasa. As the begining station, it is much easier to obtain a train ticket for Tibet train. The whole train journey usually takes about 42.5 hours.Undoubtedly, you will experience various culture and nature. You can get to Chongqing conveniently, because it has flights to/from over 40 major cities in China, including Beijing, Shanghai, Xian, Guilin, Hong Kong, Guangzhou, etc., and also has international flights to/from Singapore, Seoul, Bangkok, Phuket Island, etc. What’s more, it is popular to combine a relaxing Yangtze River Cruise with the sightseeing Tibet train journey. Check the detailed information about Chongqing Lhasa Train. 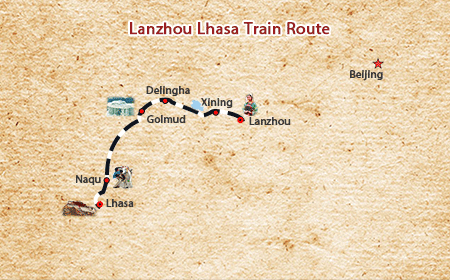 Lanzhou is an important traffic hub in northwestern China and a key portal to Qinghai and Tibet. Since Qinghai-Tibet Railway was open to traffic in 2006, Lanzhou operated one of the earliest trains to Lhasa, together with Beijing, Chengdu, Shanghai and Xining. There is only one train that uses Lanzhou as departing station - Z917. It operates in every other day. But currently every train to tibet from other cities, except Xining, will make a stop at Lanzhou, like Beijing-Lhasa Train, Shanghai-Lhasa Train, Guangzhou-Lhasa Train, Chengdu-Lhasa Train and Chongqing-Lhasa Train. It takes only 26 hours to get to Lhasa from Lanzhou, just one night away! Check the detailed information about Lanzhou Lhasa Train. 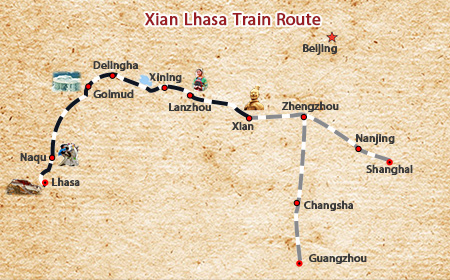 When people planning a trip to Tibet, they usually get Xian covered in their plans. Geographically speaking, train ride from Xian to Lhasa is much shorter than some other long-distance train trip from Beijing, Chengdu, Shanghai, Guangzhou and Chongqing. It takes only about 31 hours. Passengers only need to spend a night on the train, but don’t have to miss the highlighting Qinghai Tibet Railway. To take a train to Lhasa from Xian, one has to board a train from Shanghai or Guangzhou. Check the detailed information about Xian Lhasa Train..

A Tibet Train journey is usually long up to more than 40 hours, going through the highest-altitude railway in the world on the harsh and remote Qinghai Tibet Plateau area, which makes well-equipped facilities very necessary. So what kinds of facilities and amenities are equipped on a Tibet Train?

When we are planning a ONCE IN A LIFETIME TRIP like Qinghai Tibet Railway Journey, we have to be fully prepared - learning the background knowledge, finding out the best highlights, choosing the most suitable train route, knowing how to booking ticket, etc. Following are some most important guide and tips that you should learn about Tibet train travel. If you have any question about Tibet train, feel free to contact us for help. 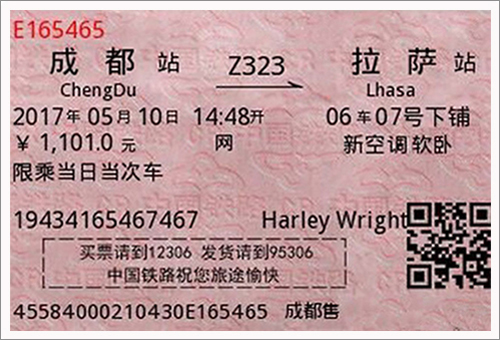 A papery ticket is needed to take a train to Tibet. There are three kinds of tickets - Soft Sleeper, Hard Sleeper and Hard Seat. 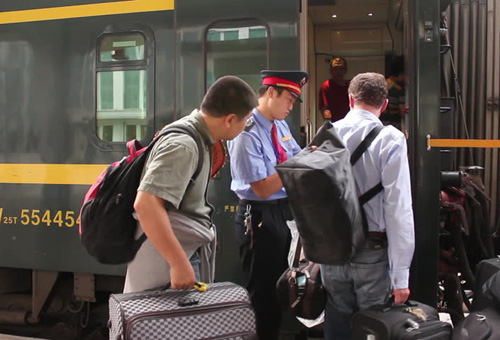 Know Before Your Train Travel

There are some important guidelines to know before taking train to Tibet, such as necessary permit, train choosing, etc, check following details: 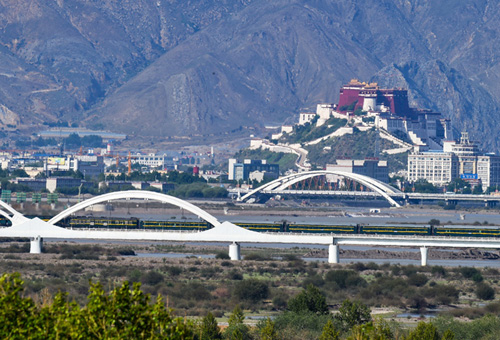 The information about Tibet train, such as schedule, train stations, new railways, always changes quickly. Following are the latest news:

Check out our most popular train tour packages departing from most popular gateway cities to Tibet - Beijing, Xian, Chengdu, Xining, Shanghai, etc. All packages are customizable according to your requirements. If you have more time, you can extend your trip from Lhasa to other popular destinations, such as Shigatse, Mount Everest, Nyingchi, Ngari, etc. Check more Tibet Train Tours>

Andrea
Wi-Fi
There IS insidie The train a wi-fi station?
With a wi-fi device there is a connection during the trip at least for 70% of the trip?
Thank’s four The information

2018-04-11 16:41
Hi Andrea, thanks for your inquiry.
All the Tibet Trains are specially designed trains that mainly offers facilities and service on high plateau areas for passengers. Wi-Fi is not common in those high altitude regions. So there is no Wi-Fi station available on the trains, whether you are in a soft/hard sleeper carriage.
If you want to use a Wi-Fi device, you need to make sure you get a device (computer/cellphone) that already connected to the internet. Pay attention to that the connection probably do not work when running at high altitudes.
Hope you enjoy your Tibet train travel! And wish you a good day!