Gyantse Town, once to be the political, economic and transportation center of Tsang, is a famed historical and cultural place located in Gyantse County, Shigatse Prefecture. It strategically lies in the Nyangchu Valley on the trade route, linking the traders between India and Tibet as well as the pilgrims journeying across the Himalayan Plateau in the ancient times. Now it plays an important role in connecting Kathmandu and Lhasa by sitting on the friendship highway. With the good climate and fertile soil, Gyantse area is also rich in natural resource and honored the Granary of Tibet. Nowadays, it is no longer the most developed town and not fast-growing as some other places, but it remains its original charm and manages to leave you a wonderful experience. In Gyantse, you are able to admire the natural sightseeing and historical sites.

In Tibetan language, Gyantse literally means “the summit of the victory and the residence of the King”. When the British army invaded Tibet in 1904, the soldiers and Tibetan people stationed in Gyantse and fought with the invaders to guard their homeland. After they run out of ammunition and food supplies, they still held on to the garrison for three more days. The descendants are moved by their spirit and honored Gyantse as the City of Hero. 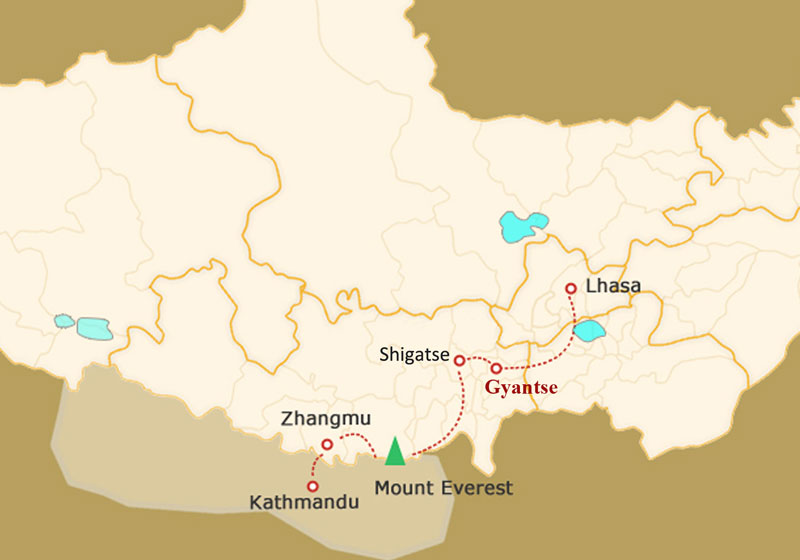 Owing the long history and special geographic position, there is plenty more to see. Gyantse’s greatest sight must be Gyantse Kumbum in Palcho Monastery, the outstanding architectural wonder and the largest chorten survived in Tibet. In addition to that, Pala Manor and Gyantse Dzong are the good places to catch a glimpse of the old life of Tibetan nobles and explore the heroic history. Besides, Gyantse also shows a view of idyllic scenery. During late spring and autumn, you might see the sowing and reaping scenes.

Following are some other recommended Gyantse tour packages that you may be interested in. All of our Tibet tour packages are customizable to meet your personal requirements. You can also contact us to customize a trip if you want.