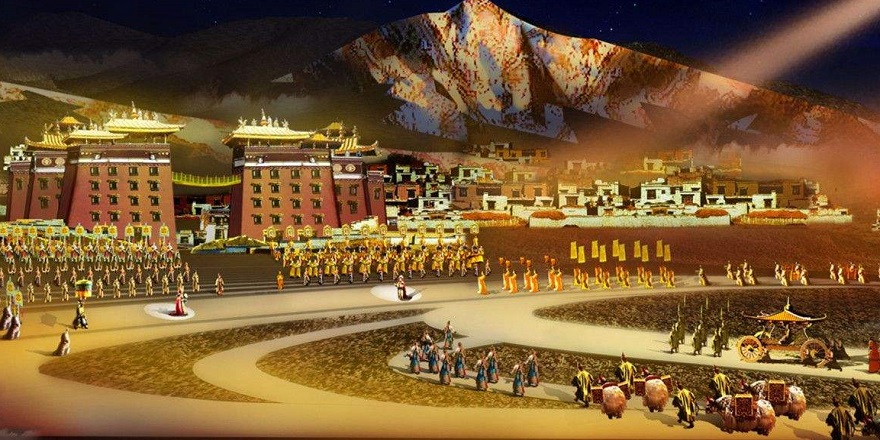 Princess Wencheng Drama is definitely a must-see and unique experience for Tibetan tourists. As a huge outdoor live-action performance, it truly presents the Chinese and Tibetan history and culture through the story that Princess Wencheng of Tang Dynasty married Tubo King Songtsen Gambo 1,300 year ago. Premiered in 2013, now the drama is a widely circulated legendary epic, revivifing an original look of Tang Dynasty and Ancient Tibet by integration of drama, music, dance and modern choreography.

Frequency: About 180 scenes every year

Told with a combination of modern technology, Datang songs and dances, Tibetan drama and other multiple elements, the 90-mins Princess Wencheng Drama consist of five acts: “Charm of Ancient Tang Dynasty”, “Buddhist Music of Heaven and Earth”, “Great Beauty of Tibetan Dance”, “God of the Plateau” and “Harmonious Beauty between Tibetan and Han”. Each part tells a short subsection to restore Tang and Ancient Tibet – Tubo unique cultures and life features.

On the background of Lhasa’s splendid landscape, the drama revivifies an original look of Tang Dynasty and Ancient Tibet by integration of drama, music, dance and modern choreography. It is making more form and content innovations with Tibetan featured details every year.

The Princess Wencheng Theatre covers an area of 24,611.8 square meters, is a huge performance venue can accommodate more than 4,000 audiences. As a huge live drama, the performers’ numbers of cast highs up to 800 totally, making it the most spectacular, impressive and authentic Tibetan original drama. Build at an investment of 750 million CNY, the drama is considered as the Top 1 drama with biggest investment in the world.

A Legend of Ancient Chinese Story

The drama is worked out based on a true Chinese story. Princess Wencheng is an important historical feature of friendly ties between Tang Dynasty and Tubo Dynasty.

During the region of Emperor Tai Zong of Tang Dynasty, some states sent messengers to request intermarriages for pacification. The messenger dispatched by Tubo King Songtsen Gambo successfully demonstrated the King’s desire to establish friendly and harmonious relations with Tang Dynasty and appetite for learning profound Tang’s culture through superior wisdom in all quiz games set by Tai Zong. Then Princess Wencheng stepped onto the way to Tibet with the good intention for both countries. During the one year journey, she spread advanced civilization of Tang Dynasty, like teaching farming, spinning and Pharmacy and Medical Technology and other skills to the mass in every Tibetan places she passed. Since then, the ties between Tang and Tubo became closer and magnificent to Tibetan cultural development in history.

Epitome of Chinese and Tibetan Culture

Adapted from the ancient history, the drama not only tells the marriage story, but also exhibit many classic Tibetan and Chinese culture. In each acts of the drama, audience can experience distinctive Chinese costume charm of Tang Dynasty and Tibetan style and features.

Garments actors wear is adjusted to be more ancient local style. More impressive, you can enjoy the splendid Tibetan Dance and Singings, such as over 300 performers play the Ga (打阿嘎), Zhuo Dance (卓舞) – the most difficult dance in Tibet and Tibetan Drama. Every prop appeared on the stage is different from the usual pattern, cows, sheep, yaks and crops on the slope are all alive for real. Small details you noticed like butter ever-burning lamps, Mani stones, huge blue masks and Thangkas are added to give audiences a visual taste of charm of classic Tibetan culture.

The simulation sceneries on the stage are in unusually large size, especially the 3D setting contains the Potala Palace and Jokhang Monastery is 160 meters long. And the realistic Potala Palace scenery is 40 meters long and 20 meters high, which makes audience feel like the real ancient palace is just in sight.

Well-known as the biggest live drama, the Princess Wencheng drama uses many tech means to create a gorgeous and fantastic scenes. Diversified lamplight, vast portable sea of flowers, wheat waves and Prayer Flags makes the performance more attractive and amazing. No other dramas will be more magnificent than the palaces ensemble with area of 100 meters long and 20 meters high in this drama. When the audience is watching the Snow Mountains scene, you will get an immersive storytelling approach to how tough Princess Wencheng went through in cold days by seeing and touching the verisimilar snowflakes fallen from the sky.

There is only 1 perfomance every night (Monday to Sunday, about 180 scenes each year), which starts from 21:30 pm and ends at about 23:00 pm. The drama is scheduled for 90 minutes, maybe it is a little bit late to midnight after you walk out the theatre.

The fifth season of Princess Wencheng Drama premiered on April 20th this year. Generally, this huge live stage show will be held near 180 scenes each year, which usually starts from April 20 and continues to play on October 31. So it will be officially finished at the end of October. And possibly, the drama will be performed every other day from Mid-October. That means since November 1st to the next year April, there is no chance to enjoy the drama due to extremely cold weather in outside.

Note: Because the drama is acted in the open air, it will be affected by the weather. Please contact the staff beforehand to check whether the drama will be held as planned. You’d better leave early to avoid the crowds and get to your seat before the opening time.

How to get the Prince Wencheng Theatre?

If you only buy the ticket for the drama, you can take a taxi or bus to the theatre. It is near the Lhasa River and 10km to the Liuwu Bridge. Taxi fee is about 50CNY. And there are four special bus routes to the theatre, such as the one-way Bus No.5, which can take you to the terminal station where the theatre sits.

There is a kind of package which includes a drama ticket and commuting transport between your hotel and the theatre you can choose. Price of package is dozens of higher than single ticket, but much more convenient for your night activity arrangement. Please contact the staff 2 ~ 3 hours in advance for pick-up service.

What kind of ticket should I buy?

The farther from the stage, the higher the ticket price is. The cheapest ticket - Ordinary Ticket B is the closest to the stage, which sells for 380CNY. Ordinary Ticket A is in the back row of B, Ticket V1, V2 and V3 are in the middle site. The VIP ticket is 1280CNY, which is the highest price of all due to the best panorama view of the stage.

Where to buy the Princess Wencheng drama ticket?

In order to facilitate the buying, tourist can get the ticket in three ways. One is book ticket at ticket office in the Parking lot 1 of Princess Wencheng Theatre in person. The second, there are more than a hundred ticket offices opened in hotels and travel agencies in bustling Lhasa parts where tourist can easily buy the ticket. Also you can contact Tibet Discovery who provides convenient ticket booking service for you as well as the car arrangement. 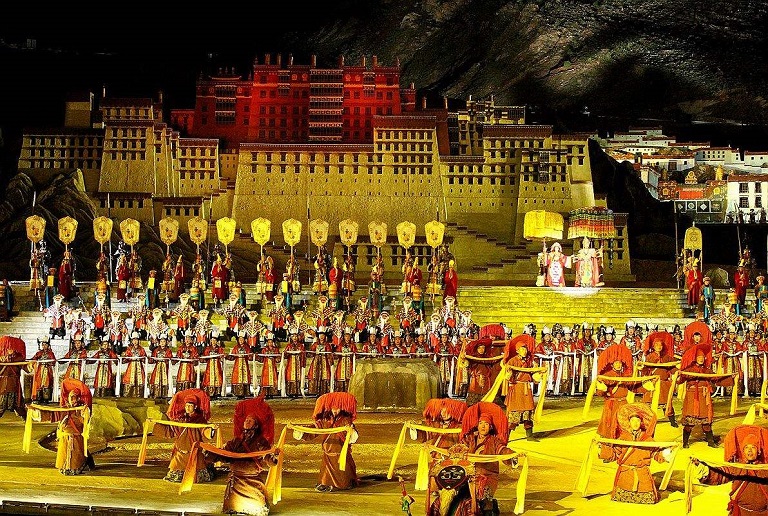 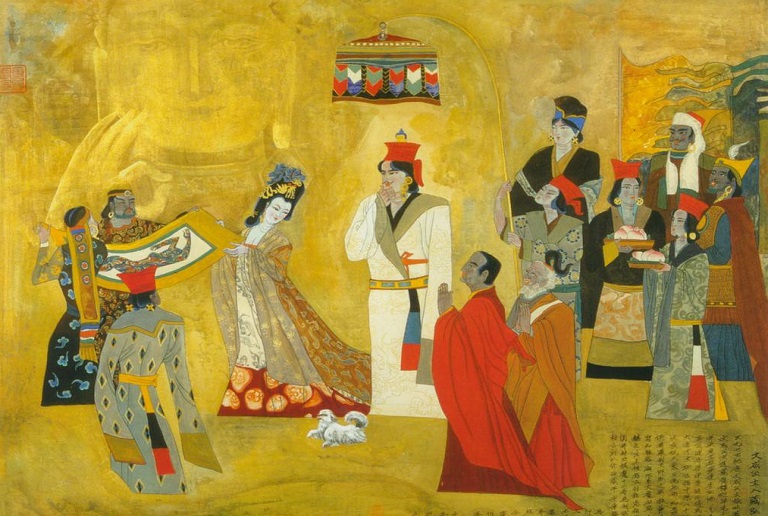 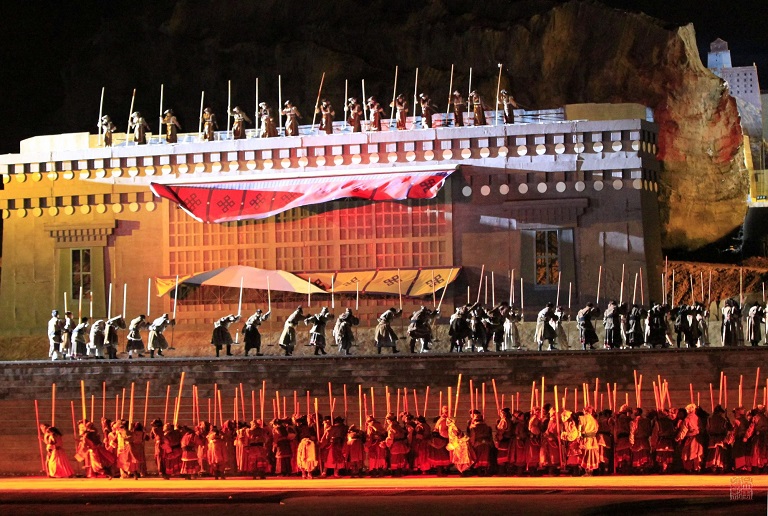 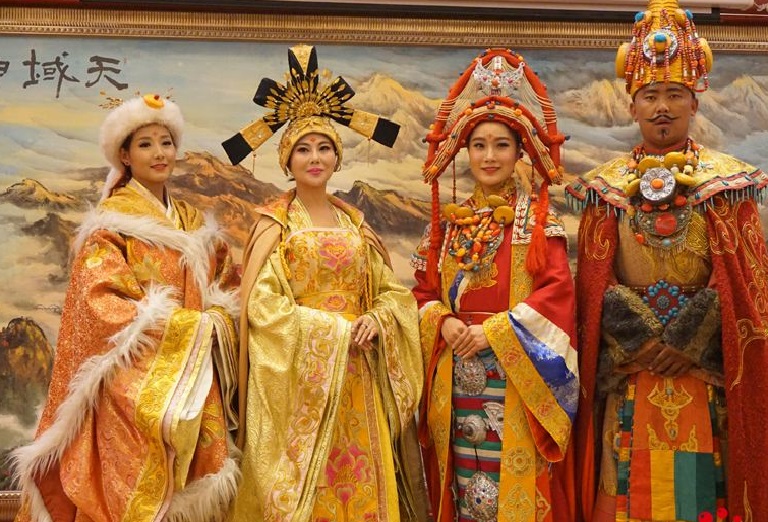 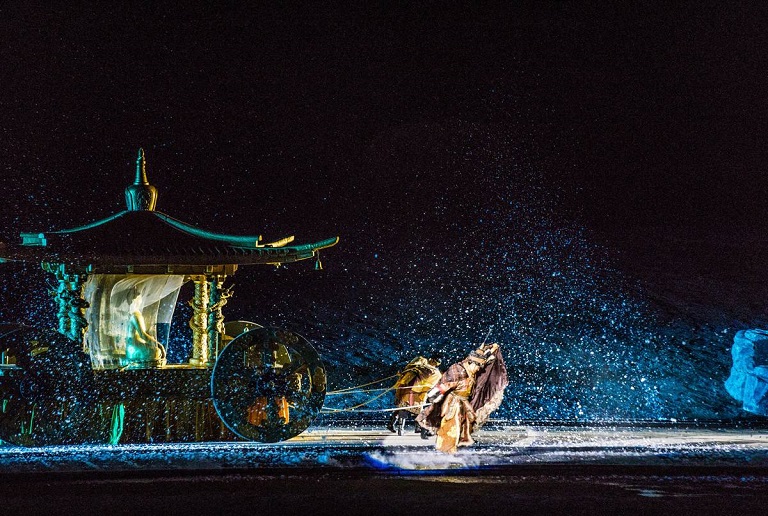 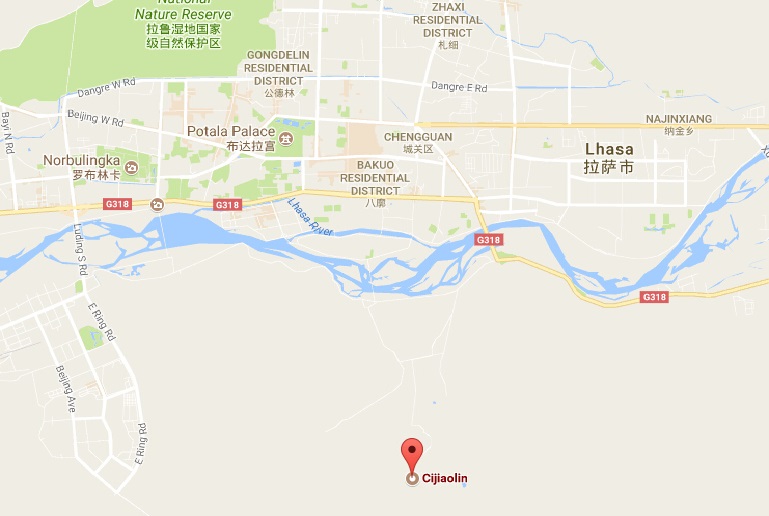 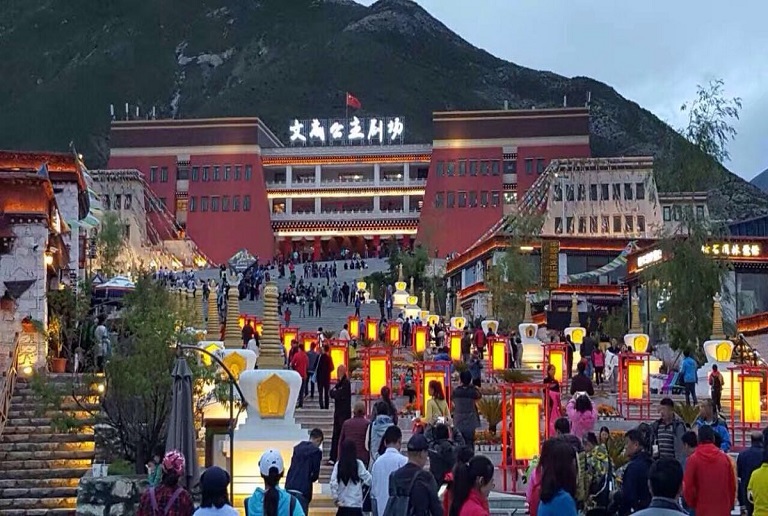 Entrance to The Theatre 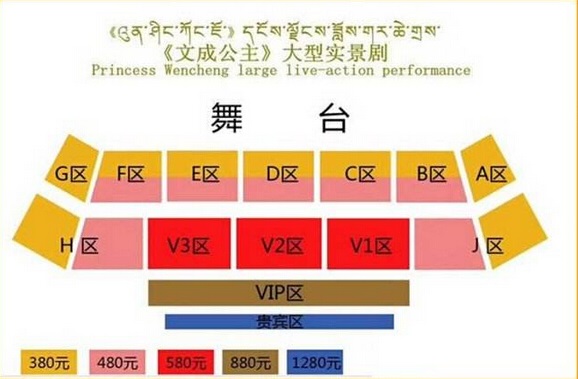 1. Book a convenient and comfortable pick-up and drop-off service.So you don’t need to worry about how to get the theatre and go back to your hotel at midnight after the drama is over.

2. You’d better start off earlier, because the drama is very popular and has hundreds or even thousands audience in every singer drama. It will be rather crowded before the opening and tedious to climb many steps to the entrance, even you may miss the prelude of the drama if you are in a hurry.

3. Wear warm clothes. During the night live drama, you will spend 2 hours in the outdoor. In Lhasa, temperature varies widely from day to night, especially in the evening of Spring, Fall and Winter. So we strongly advise you to wrap up warm, or else you will catch cold, quite suffering for your Tibet tour.

4. The stage side screen is prompted in three kinds of langue: English, Tibetan and Mandarin to help tourists better understand of the whole opus.

5. If the Princess Wencheng Drama is cancelled, delayed, suspended due to irresistible forces, like earthquake, typhoon, debris flow, etc. and other severe natural disasters, or reasons sponsors think improper to perform, the ticket which has bought will be handled in the following two ways:

A. The ticket holder can refund the ticket at place where you bought it, if the drama is cancelled or suspended within 30 minutes after beginning.

B. You can continue to watch the performance after exchange a new valid ticket in the ticket entrance within three days, if the drama is suspended after 30 minutes of opening.

You are here: HomeTibet DestinationsLhasaPrincess Wencheng Drama
My wish list