You are here: HomeTravel GuideWhat to Eat & Drink

Tibetan cuisine, food and drink there just like Tibetan people and their culture, has a very distinct character. Some tourists maybe not like the flavor of Tibetan style food and even give Tibetan cuisine a bad reputation which misleads others on Tibet cuisine. While others like it and think it's not that bad, and it is worth trying and a good way walking into real local Tibetan life and culture for Tibet travel.

Whether it's tasty or not, you need to try it yourself. Even if you have explored all Tibet attractions, your trip to Tibet is never complete without trying Tibetan food.

Tibetan people have unique food and drink due to special geographic condition of high altitude, harsh climate, their traditional religious belief and ethnic customs. Daily diet mainly consists of meat, milk and other high protein food to help them fight the cold. Tibetans often eat a lot of yak meat and mutton but they don't eat horse, dog, donkey or even fish.

In the cooking class, you can participate in all processes of cooking, including shopping in the local outdoor market, getting food material ready, cooking food to well and feasting on the food made by yourselves. This small and simple restaurant allows you to fully feel the joy of cooking and get a better understanding of Tibetan food culture. According to the size of your group, at least 3 dishes will be cooked. Yak Momo, also the signature dish in Tibetan Family Kitchen, is a must. Then you will make one kind of salad and another you prefer (chosen from the menu).

Check more details at Tibetan Food Cooking Experience or contact us to customize a gourmet tour. 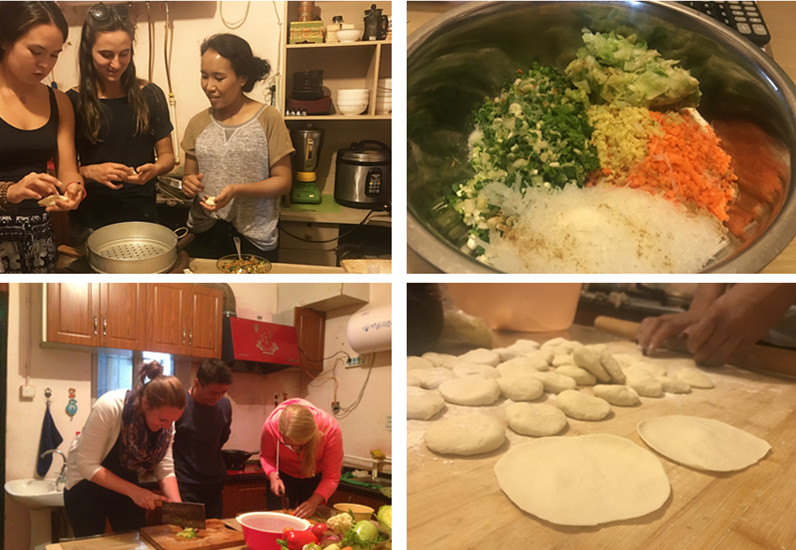 What to Eat in Tibet? – Tibetan Food

Tsampa (糌粑) is a kind of roasted barley flour and one of the staple food in Tibet. Tibetan people eat Tsampa every day and bring it as a ready-made food when traveling. If you visit a Tibetan family as a guest, they will treat you with delicious mild tea, Tsampa and lots of local dishes. The dough made with roasted barley flour and ghee (yak butter) is a typical food of local Tibetan.

There are 2 basic methods to make and eat Tsampa. The most common way is quite simple: first dry the highland barley with sand in a wok and then pulverize the parched barley into flour, stir and mix up barley powders with Tibet buttered tea to eat.

Expect the interfusion with buttered tea, another one is to make porridge with beef or mutton, and vegetables. The former one is salty while the latter is added with sugar to give it a sweet taste.

Beef and mutton contain high protein which is helpful in warding off the cold, which makes beef (yak meat) the most popular meat eaten by Tibetans. Many Tibetans often eat raw meat when the fresh beef is tender and delicious, while others boil beef and mutton with ginger, salt and spices. Dried beef and mutton strips are also popular in Tibet, and now becomes a tourism specialty. Dried meat is probably difficult to chew but tastes good. Additionally, the dried meat can be stored for a long time and is useful when traveling long distances.

Tibetan noodles (藏面) are usually served with simple vegetable, diced beef, chopped scallions in the brewis. Those who live in cities of Tibet prefer to have Tibetan noodles and sweet tea as their breakfast. Some restaurants also offer pickled radish and chilli sauce to season the noodles. Some say Tibetan noodle soup is the most enjoyable for the meal as the soup taste nice together with a bit of shallot to keep warm.

Milk curd or named milk sediment (凝乳) is solidified sediments of boiled milk, which tastes sour. Tibetans bring it when traveling to avoid environmental inadaptability. Milk curd can be eaten as snacks or used to make Tibet buns. Besides, fried milk curds tastes good too, but is very hard to bite.

Tibetan Yogurt is a must-eat in Tibet. Fermented from yak milk, Tibetan Yogurt tastes mellower than ordinary yogurt we eat. It is a necessary food for Tibetans with more than 1000 years’ history. Shoton Festival, a yogurt feast in Tibetan language, is one of the most important and exciting festivals in Tibet. The raw sour yogurt will surprise you without adding any sugar.

Tibetan people make the best of yak and sheep products for living. They are fond of varied sausages, including meat sausage, blood sausage, flour sausage, liver sausage, lung sausage, etc. Among all types of sausages, blood sausage and white sausage are the most common and popular ones.

Blood sausage is made of small yak or sheep intestine tied to sections and infused with chopped mutton mixed with sheep blood, salt, Sichuan Pepper and Tsampa powders. The ingredients of white sausage are rice, sheep blood, mutton tallow and some flavors.

Momo are Tibetan dumplings which are made with either meat or vegetables. The half-moon-shaped Momo can be either steamed or fried and served with chili sauce. As one famous Chinese style snack, Momo is another name for dumplings in Tibet, Nepal, India and other South Asian Country.

As for the Ginseng fruit, it is not only an auspicious symbol of good fortune, but also rich in all kinds of nutritions and benefits a lot to your digestive system and health.

Honestly, except above food, there are more local foods that need further exploration in different regions of Tibet, such as Potato stuffed bun (土豆包子), Nokdumuk, Lulang Chicken Stone Pot and Pengbi (朋必) – a local snack in Shigatse. 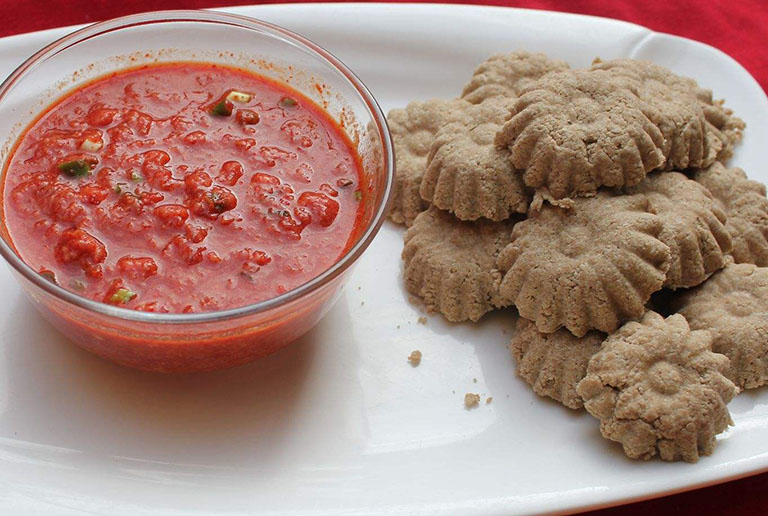 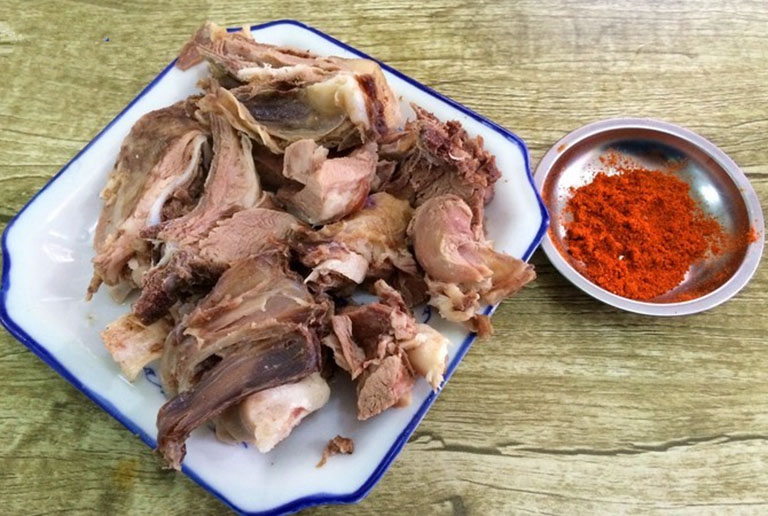 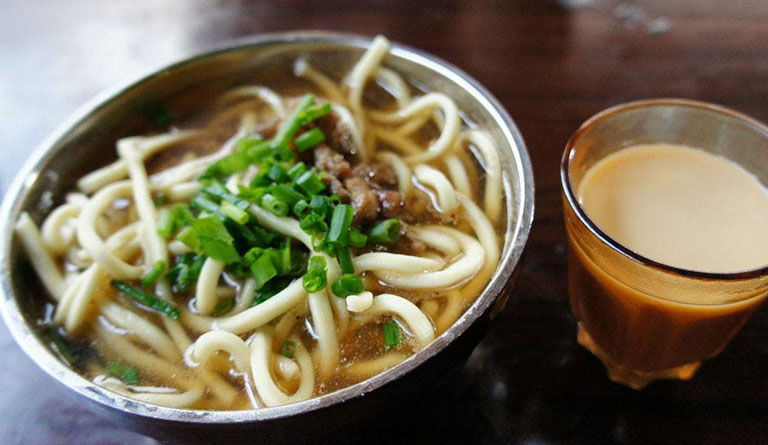 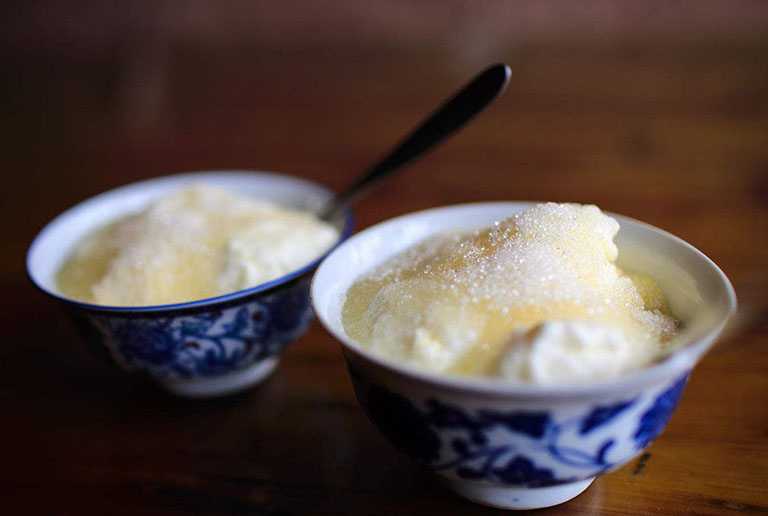 Tibetan Yohhourt in a Bowl 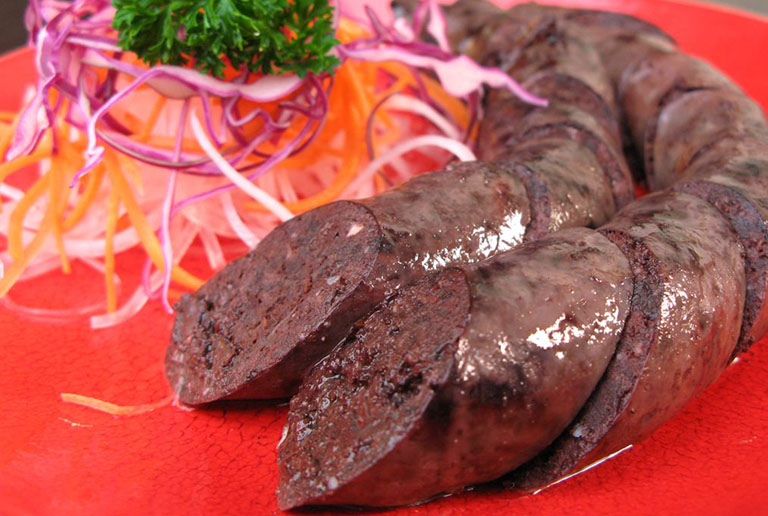 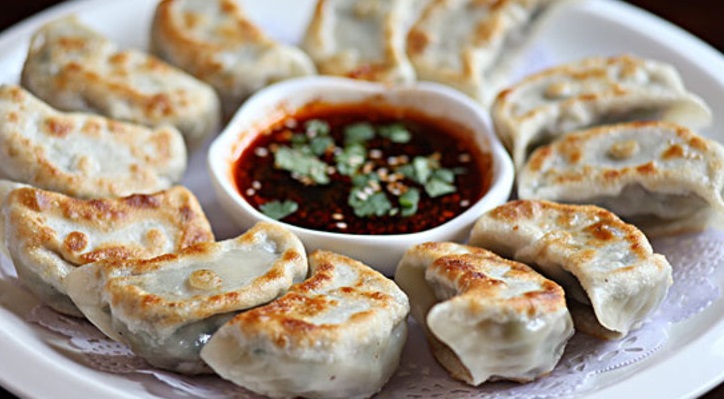 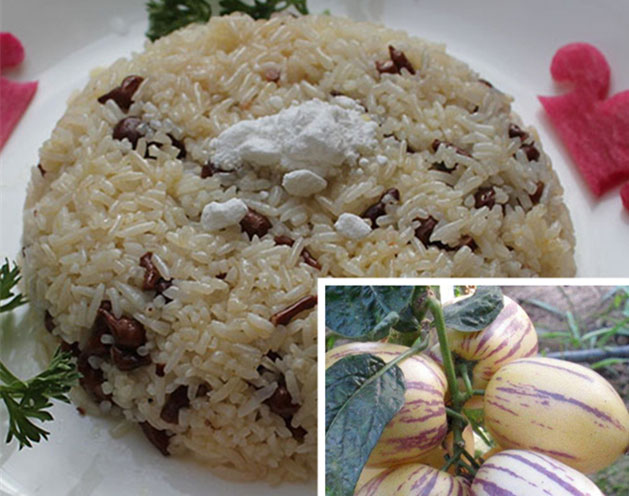 What to Drink in Tibet? – Tibetan Drinks

• Tibetans usually serve tea to guests in small bowls instead of cups.

Butter tea (酥油茶) is a must-drink during Tibet travel and another staple of Tibetan meals. To put it simply, the butter tea is boiled strong tea added with ghee and salt. Tibetan people drink butter tea to keep themselves warm and it is usually drunk when eating Tsampa.

Some say it tastes more like soup rather than tea and some may think it tastes funny. Whether you are a new comer to Tibet or not, you’d better have a try at the butter tea which can help tourists ease high altitude sickness, prevent lips from cracking open in dry weather and is good for against cold.

There are some rules when the Tibetans serve guests with butter tea. Don’t be in a hurry to drink it when the host Tibetan fills up your bowl or cup with butter tea. You should chat with the hosts first, and drink the tea slowly when they come before you with the teapot. It’s a polite and respectful way for you not to finish up your tea.

Tibetan Sweet Tea (藏式甜茶) is another popular tea in Tibet. There is a saying that Tibetan Sweet Tea is the blood of Lhasa, from which you can see the importance of sweet tea in Tibetan life. Different from the reputation of Butter Tea, Sweet Tea receives lots of affection among visitors becasue it smells more pleasant and the taste is not that strong.

How to make it? Boil milk with brick tea and sugar added. That sounds simple but only tastes good when Tibetans make it. Many sweet teahouses located in Lhasa and Shigatse are common recreation places for Tibetans and tourists. Tourists can find a teahouse to drink the sweet tea and chat with friends all day to relax where charge surprisingly cheap for unlimited refill.

Tibetan barley wine (青稞酒) is brewed from fermented barley grown on the highland. It's the most favorite alcoholic drink of Tibetans. The wine is mild, slightly sweet and sour, and contains little alcohol. The taste of Chang differs from one to another due to the brewing method and duration. Inherited more than 400 years, the fragment mellow tastes nice and nearly all Tibetan families can make Chang by themselves. They often drink it during festivals, New Year, weddings, baby birth and visiting relative and friends.

If you are interested in visiting a local family and tasting their home-made food, you are suggested to take 5 Days Tibetan Life Discovery Tour. 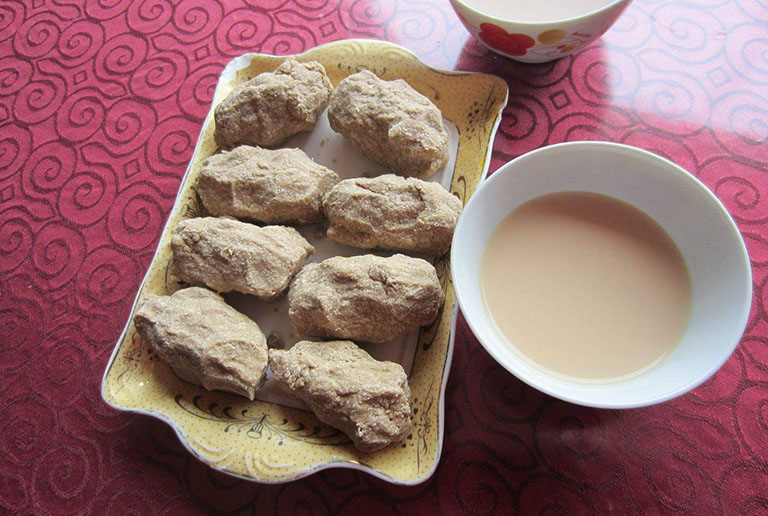 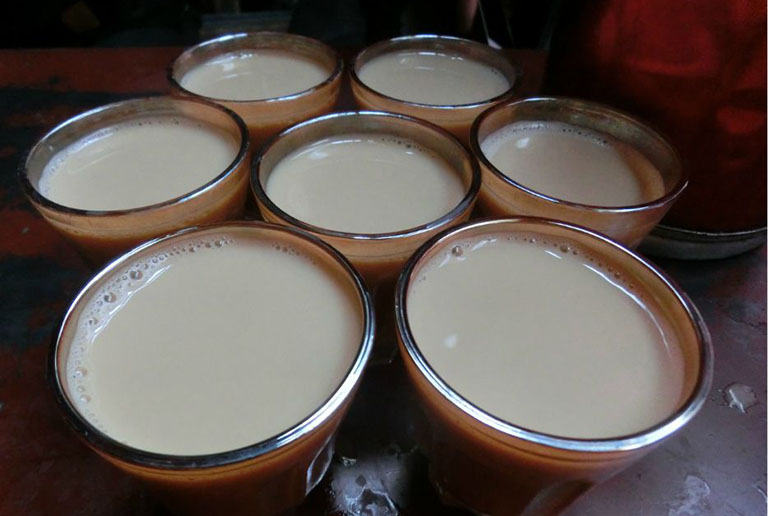 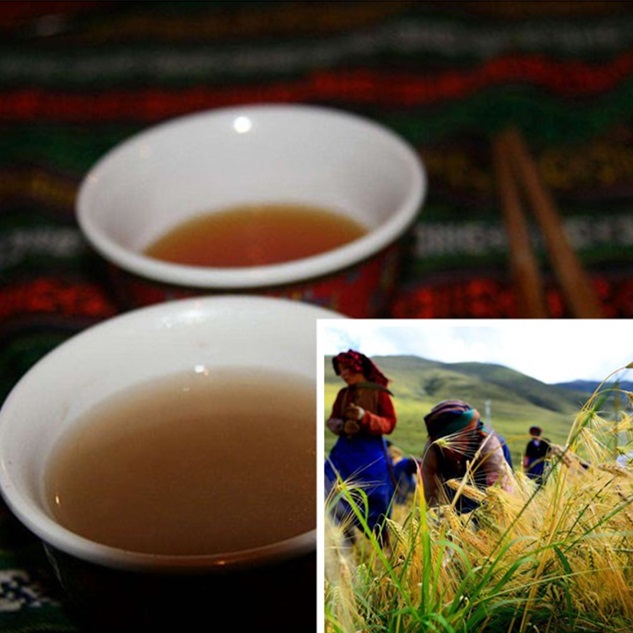 Where to Drink and Eat

In Tibet, there are good restaurants and cafes worthy of your taste. Apart from the local yummy Tibetan food, it is also available to have some Nepalese style food, Indian dishes, continental food, Sichuan cuisine and some other Chinese food. We have selected several top recommended restaurants in Lhasa for your reference. You could check more at Best Lhasa Restaurants & Lhasa Cafes.

Summit Cafe: If you want nice coffee and western breakfast, it might be the best place to go. The authentic espresso coffee, melt-in-your-mouth cheesecakes and excellent pizza are loved by most customers. 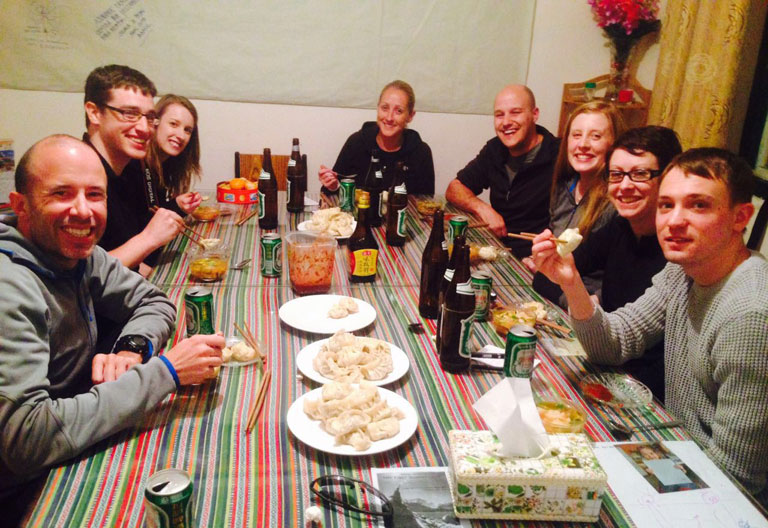 You are here: HomeTravel GuideWhat to Eat & Drink
My wish list