Tashilhunpo Monastery as one of the six Gelug monasteries is the seat of successive Panchen Lamas. Founded by the First Dalai Lama in 1447, it is an important monastery in Tibetan history and culture. Located at the foot of Drolmari, western side of Shigatse, the second largest city in Tibet, it means "all fortune and happiness gathered here" or "heap of glory" in Tibetan. Covering an area of nearly 150,000 square meters, the monastery is the largest temple in Shigatse, which has about 57 halls and 3600 rooms. Among them, the Coqen Hall can hold 2000 people chanting at the same time. Featuring an interesting sprawling amalgam of traditional Tibetan monastic style, those halls, chapels and other structures are connected by precipitous steps and narrow cobblestone alleys. The interplay between the golden roofs and the white, red and black exterior walls creates a striking composition.

Founded in 1447 by Gedun Drub, who was later named the First Dalai Lama, Tashilhunpo Monastery was constructed in the year of 1459. At that time, there were only five Buddhist halls with 12 Buddha enshrined and about 200 monks.

After Gedun Drub became the Abbot, more buildings were constructed. During the period of the fourth Panchen Lama (1601-1662), Tashilhunpo Monastery went through a big reconstruction and expansion into a large scale with more halls, chapels, palaces, dormitories to house over 5000 monks. Meanwhile, it became the largest temple in Shigatse and one of the four Gelug temples, together with other three in Lhasa city. After the 4th Panchen Lama took power, Tashilhunpo Monastery officially became the seat of Panchen Lama. Since then, the monastery was further expanded by the successive Panchen Lamas. 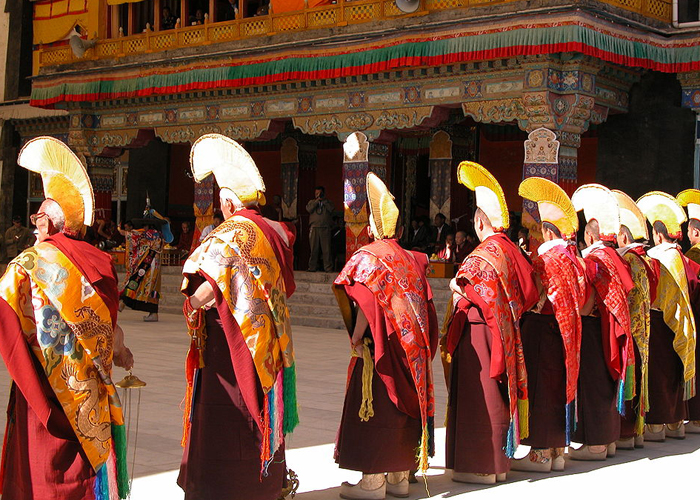 Being the largest monastery in Shigatse, Tashilhunpo Monastery stores many treasures, including the giant priceless Future Buddha Statue, precious Buddha Stupas, and more manuscript Buddhist texts and numerous murals. Besides, the annual Thangka Ceremony to present three embroidery Buddhas is another attraction here.

The future Buddha Statue, is the world’s largest gold gilded bronze statue, enshrined in the 5-storey Maltreya Hall, situated in the west side of the monastery. Built in 1914 by the Ninth Panchen Lama, this hall is constructed by stones and decorated with copper bells under the roofs. And the future Buddha is the main feature here. Siting on the 3.8 meters height lotus seat, the giant statue is 26.2 meters high and 11.5 meters wide across shoulder, with its foot for 4.2 meters long and hand length is about 3.2 meters, quite eye-catching when you enter the hall. As a treasure of Buddha statues, it took four years to finish with an extremely costly, such as pearls, turquoises, corals and ambers have absolved for its construction. Taking a close look, you can find there are various shapes of pearls and diamonds dotted between its brows.

The Buddha Stupas in Tashilhunpo Monastery is the tombs of the past Panchen Lamas. Those ochre buildings topped with gold, called stupas, contains the relics of the 4th to 10th Panchen Lamas. With several years to complete, each stupa is splendid and magnificent, especial the 10th Panchen Lama’s stupa.

The 10th Panchen Lama’s stupa, consecrated in the Shisongnanjie Hall (in the right hand of Maltreya Hall) is a glorious building covered with gold. Under the construction of three years from 1990.9-1993.9, this Tibetan architectural style is made up of red and brown colors of local religious characteristics and absorbed the architectural art of Tang and Qing dynasty. With a height of 11.55 meters, this stupa cost great quantity of precious things of jewels, diamonds, etc.

As for the 4th Panchen Lama's funeral stupa, enshrined in the Panchen Lama's Palace and the the 5th to 9th Panchen Lamas’ stupa which preserved within five sandalwood boxes, placed in the vase of one stupa, both are beautifully decorated and worshiped from pilgrims from years to come.

The Panchen Lama's Palace is the place where the successive Panchen Lamas lived. On the east side of the monastery, it is a white palace containing many inscriptions and embroidered silk Thangkas that relate the lives and events surrounded the Panchen Lamas. What’s more, here has kept the Fourth Panchen Lama's stupa. Built in 1662, the stupa with 11 meters high, contains 85kg of gold, silver and countless semi-precious treasures, which took four year for its establishment. Since the old living quarters of the Panchen Lama are no longer open to the public, tourists can only visit some small halls in front of the palace.

Sitting northeast of the monastery, the huge Thangka wall with 32 meters in height and 42 meters in width, can be seen faraway. Founding in 1468, it was a memorial monument to commemorate the birth, nirvana and initiation into Buddhahood of Sakyamuni. During in the Buddha Exhibit Festival taken place on May 15th of Tibetan calendar every year. This big wall will be used to display Thangkas of Buddha. From May fourteenth to sixteenth, three Buddha (Buddha of Measureless Light, Buddha Sakyamuni and the Future Buddha) will be exhibited per day. 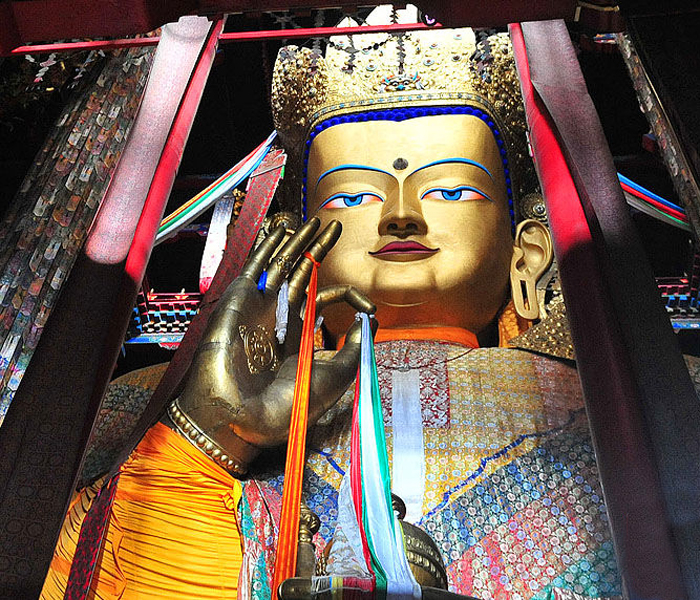 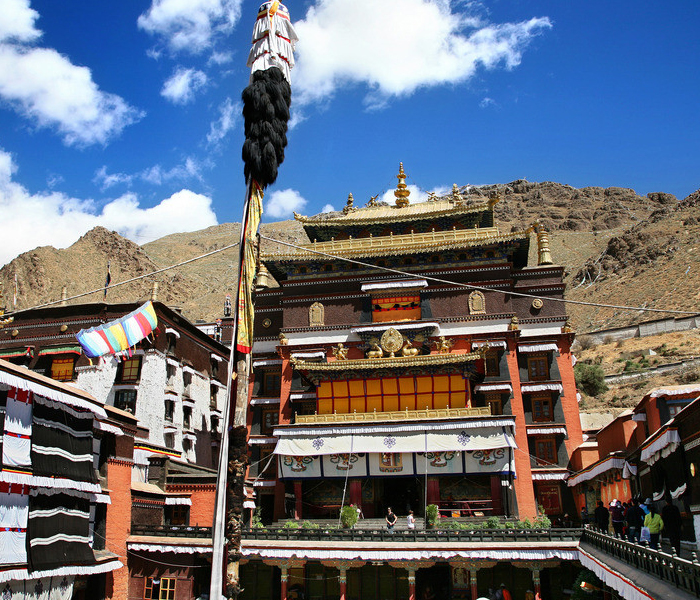 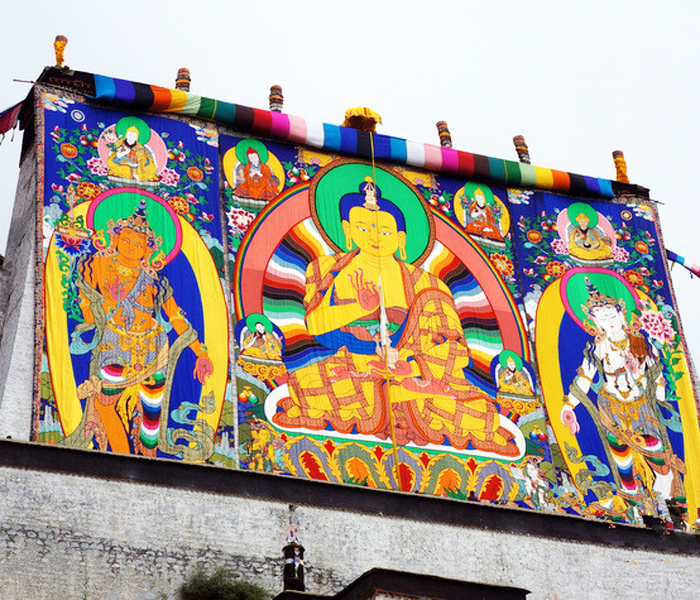 How to Get to Tashilhunpo Monastery

Usually, Tashilhunpo Monastery is covered in every itinerary which goes to or pass by Shigatse, which means you don't have to have trouble with transfer to the site.

How to get to Shigatse

The second largest Tibet city Shigatse is well connected by air, road and railway. You can directly take flights from Chengdu to Shigatse Peace Airport, which is about 45km from Shigatse City. There are also daily trains from the capital Lhasa to Shigatse, usually 1 train in the morning and 1 train in the afternoon. It takes only about 3 hours to get to Shigatse from Lhasa by train. Driving to Shigatse is the most popular way because there are many interesting places to see along the driving, such as Yamdrok Lake, Palcho Monastery, etc. It needs about 8~9 hours for the driving (traveling). 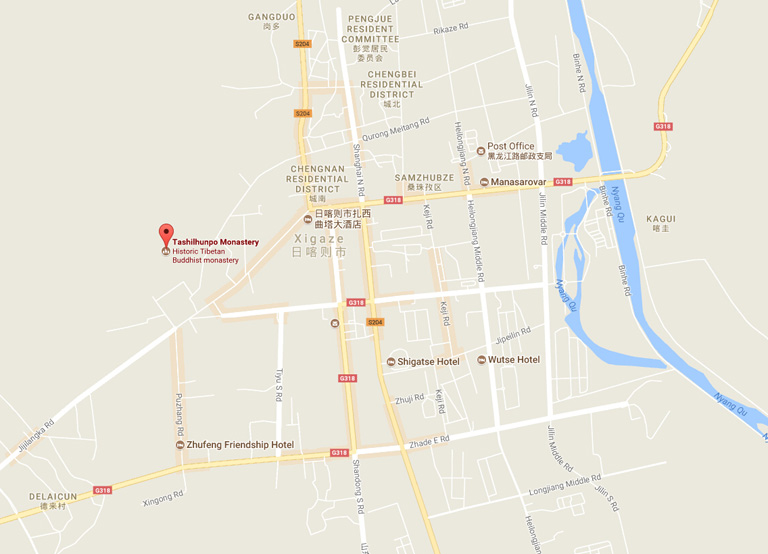 ● After entering the temple, you must walk clockwise from left to right.

● Taking pictures is restricted in most halls. You may ask for permission from the lamas and sometime you need to pay for it.

● Apart from the main palaces, there are lots of rooms with complicated layout and easily to get lose. Please keep up with your tour guide when visit in the grand monastery.

● Tashilhunpo Monastery Kora: make a short kora around the monastery is an interesting walk to find pilgrims, prayer flags, prayer wheels and some offerings along the way. By climbing on a hill-side, you can have a great view of the monastery and Shigatse. 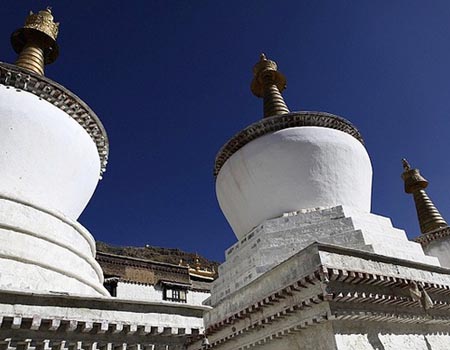