Norbulingka Palace, on the west edge of Lhasa city is the biggest manmade garden in Tibet Autonomous Region. Nearby Potala Palace, Norbulingka, in Tibetan, refers to “Park of Treasure” and used to be the summer palace of Dalai Lamas to deal with government issues and hold religious activities. As one part of the historic Ensemble of the Potala Palace, it was added to World Heritage Sites in 2001. Built from 1755 and under the reconstructions of different Dalai Lamas, Norbulingka expands its scale into over 360,000 square meters and more than 374 rooms, including palaces for 7th to 14th Dalai Lamas. Dotted with various kinds of precious flowers and plants, it is the genuine “Plateau Oxygen Bar”. With peaceful atmosphere and tranquility, you will easily get yourself relaxed when walking inside this pure land.

As a barren land, Norbulingka was initially nothing but full of overgrown weeds and infested wild animals. Due to the scrub growth alongside and beautiful scenery in the summer, this place was attractive to 7th Dalai Lama, who’d like to pitch camp to spend his whole summer time there. Finally, in the year of 1755, this place was transformed into a park by the 7th Dalai Lama where he handled political issues, met guests and organized ceremonies.

Since then, the subsequent Dalai Lamas kept studying and spending their summer time here. Gradually, this place became the summer palace of Dalai Lamas. When the 8th Dalai Lama took charge, Norbulingka was in the form of palaces and gardens. With the further extension by the successive Dalai Lamas (until the 14th), Norbulingka shapes from several rooms and chapels into a variety of building complex, including numbers of palaces subject to each Dalai Lama, Buddhist halls, pavilions, villa and more plants around.

As for the layout, Norbulingka is mainly made up to several palaces and each palace is consists of three sections: the forest area, the palace area and the area in front of the palace. With typical Tibetan style combined with inland traditional garden technique, all buildings are well arranged here. Besides, there are murals painted on the walls of Buddha halls and some precious relics and Buddhist books are stored.

Today, being a public park and museum opened in 1959, common people can visit inside to wonder its beauty. Also there are various activities and festivals taken place for tourists to join in the Tibetan. 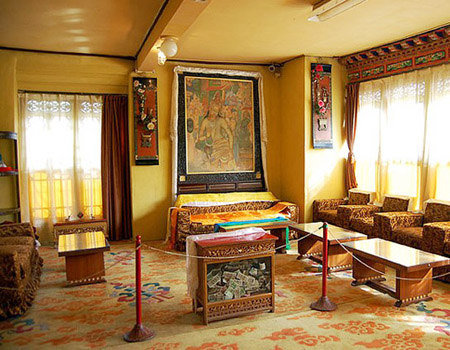 Tyokyil Potrang (措吉颇章): It is a pavilion in the midst of a lake and known for the top scenic spot in Norbulingka, built by the 8th Dalai Lama. With two stone bridges to connect both sides, its layout is a shape of rectangle with three small islands listed by. Decorated with gold covered roof and copper tile, this palace is full of Buddhist murals around walls and different Buddha statues and the rest rooms for Dalai Lama.

Kelsang Potrang (格桑颇章): As the first palace in Norbulingka, it is named after the 7th Dalai Lama, Kelsang Gyatso (1708–1757). It is a three-storied palace with Main Assembly Hall on the first floor, and chambers for the worship of Buddha in the second one, as for the top floor, which was added later as the living room and political meeting center. The murals on the second floor are worth seeing. With lively images of kids playing, these lifestyle paintings are rare to find in Tibetan Buddhist culture.

Takten Migyur Potrang (达旦明久颇章): Built in 1954 by 14th Dalai Lama, it is called the New Palace. As the most elegant and largest palace with a fusion of a temple and villa, it is the representative to present Tibetan architecture. With the similar function of other palaces, the chapels on the second floor reserved a serial mural to describe the history of Tibet by over 300 scenes, which is quite particularly.

Apart from some splendid palaces and magnificent buildings, Norbulingka also features some big Tibet event activities, such as the annual Shoton Festival. After the grand ceremony of Buddha Exhibition in Drepung Monastery, this festival still last with strong atmosphere from the first day to the seventh day of July in Tibetan Lunar Calendar. During those days, people gather in Norbulingka to have a family picnic and enjoy wonderful Tibetan shows. Many famous Tibetan Opera teams will compete in Norbulingka to perform traditional shows and dances to please audiences. 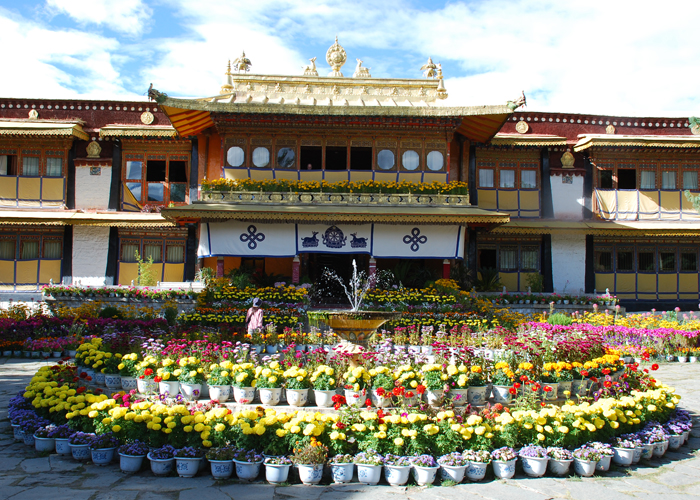 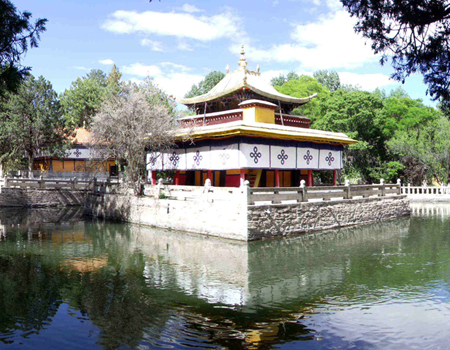 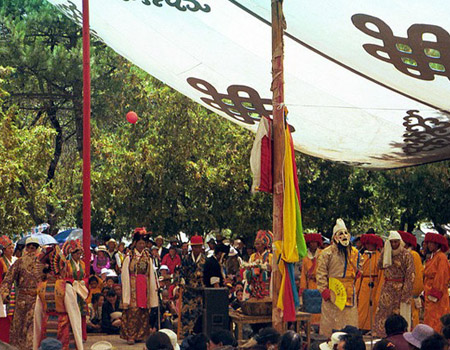 How to Get to Norbulingka

Located in the Lhasa downtown, Norbulingka is easily to reach. Most of the buses go to Norbulingka, such as the bus No.2, 14 and 24. You can walk here from the nearby sites, such as Potala Palace, Tibet Museum. Or if you transfer from a distance sites, like Barkhor Street, taking a taxi or Pedicab is advisable. Below are some main attractions around for you to know better about its location and see them together with time permitted:

● 4 km away from Jokhang Temple 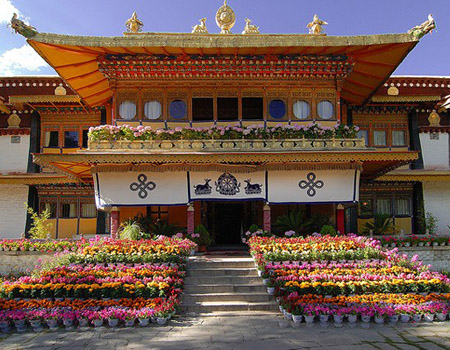 ● Norbulingka Ticket is 60 rmb for each, if you want to see the only zoo in Lhasa, you may pay an extra 10 rmb.

● You may take 2-3 hours to thoroughly visit this large park. According to the physical condition, you can choose to visit a part of it or take the tourists bus to visit around for 20 rmb per person.

● There are various activities to join in when you visit Norbulingka such as watching Tibetan Show and tasting Tibetan Tea.

● If you come to Lhasa during the Shoton Festival, you can spend more time at Norbulingka to enjoy the bustling activities and totally relaxed.

● As a treasure park, Norbulingka is an ideal place to take pictures for the beautiful scenery. The interior of Buddhist halls and palaces, you may ask for permission firstly. 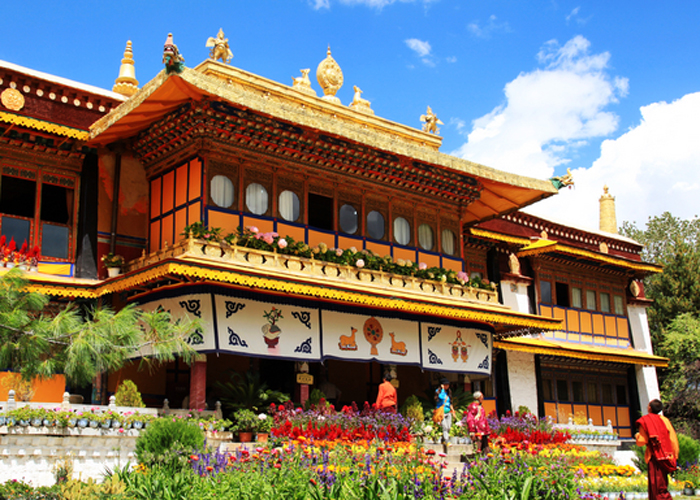 Tibet is too vast to be visited in one single trip, but planning ahead of time can make most of your holiday. A classic Tibet tour always takes about 4 ~ 8 days. Apart from 2 days for arrival and departure, it usually needs 2 other days to explore majestic Potala Palace and other landmarks such as Norbulingka in Lhasa, the capital of Tibet. With a day trip’s distance from Lhasa, Namtso Lake is another perfect tour extension if you visit Tibet from May to October.