Ganden Monastery is one of the earliest and largest Buddhist monasteries in Tibet. With over 600 years of history for building in 1409 by Tsongkhapa, the founder of the Gelug Sect, it stands atop of the six famous temples of Gelugpa, and also known as one of the Three Great Temples, together with the Sera Monastery and the Drepung Monastery. In the meaning of happiness and contentedness in Tibetan, Ganden Monastery is the main dwelling of successive Gelug abbots and their tombs were built into pagodas for over 90 numbers. With an orderly architectural layout of standing Buddha halls, towering roofs, splendid stupas, Ganden Monastery is arranged well with vivid colors of black windows, white walls and the golden roofs, like a castle under the heaven. Besides, the kinds of architectural buildings and a large quantity of cultural relics and handicrafts are worth visiting. Along the winding twisty road up, you can appreciate the authentic holy land under the blue sky.

As the first Gelugpa Monastery, Ganden Monastery has an important role in Tibetan religious culture. It is the product of reformation movement practiced by Tsongkhapa in the early 15th century. With a high rank status in Tibet, there was a heyday for over 4000 monks lived in the monastery after the construction in 1409. In 1980, there was a thorough reconstruction for some major buildings, including the holy stupas of Tsongkhapa, scripture halls, Buddhist halls, etc.

Tsongkhapa (1357-1419), the founder of Ganden Monastery, who was supposed to the reincarnation of Manjusri, born in Qinghai, and firstly contacted the Buddhism when he was three years old. After studying 9 years Buddhist doctrine for 9 years in Xia Qiong Temple, he left Qinghai to Tibet for further study in the year of his age of 16. In the later years, he learned from different sects’ monks and sucked up all the essential of the Buddha dharma. At the same time, he got more and more reputations in Tibet.

With the development of Tibetan Buddhism, the ill disciplines happened among the aspects of intellectual, religious and monastic in Kagyu, Sakya and more sects. Disappointed at those undesirable phenomena, Tsongkhapa reined his disciples and followers into a strict new order- the Gelug sect was established with an austerity of monastic life and emphasized the primacy of philosophical study. In order to distinguish from other sects, he and his followers wear Yellow peach shaped hat. Hence, the Gelug sect is also called the Yellow Hat sect. In 1409, the Ganden Monastery, as the first Gelug Monastery, was built near Lhasa and Tsongkhapa was the first abbot of Ganden Monastery. 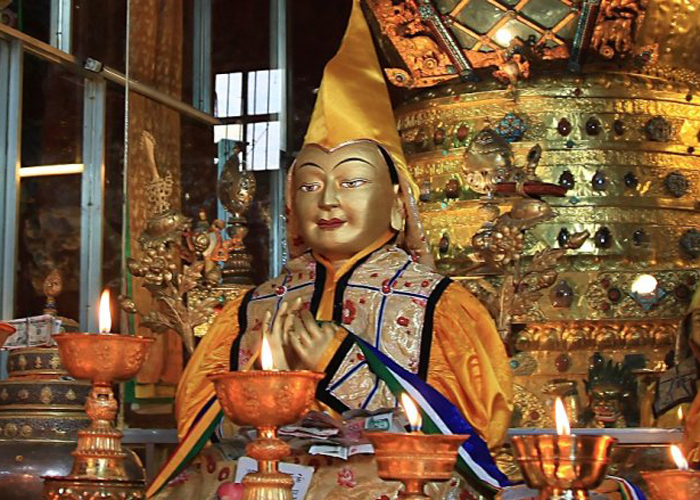 As the first Gelug temple, Ganden Monastery once was a massive building complex with typical Buddhist buildings and many historical relics reminds. What’s more, in Ganden Monastery, you can join in the grand traditional festival, called TsongkhapaButter Lamp Festival .

There are many precious historical and cultural relics left in Ganden Monastery, including beautiful murals and sculptures, elaborate Thangka, dating back to Ming dynasty and the armor carved with four languages and decorated with jewelries which was bestowed by Emperor Qianlong of Qing Dynasty in 1757.

As one of Tibet’s cultural centers, Ganden Monastery is composed of over 50 buildings including assemblies, shrines, chapels, pagodas and some other halls for Buddhism chanting or learning. The Tsochin Hall, the biggest assembly contains over one hundred massive pillars and different sections of lobby halls, chapels and Buddha palaces. Most of the chapels are two-storey buildings which could accommodate over one hundred Buddhists chanting at the same time.

With white walls and red roofs, those buildings have different purposes. Such as the Tri Thok Khang, known as the clothing-preserving Hall, once served as the bedchamber of Tsongkhapa and his successors, was the place for them to learn esoteric methods. And the Serdhung is the Holy Stupa Hall to keep the body of each abbot by building pagoda here.

Tsongkhapa Butter Lamp Festival, celebrated in whole Tibet is the most important traditional festival in Ganden Monastery to mourn its founder. Hold on October 25 of Tibetan calendar, the death date of Tsongkhapa, this festival is quite solemn and grand. During the daytime, the 26 meters long, 10 meters wide tapestry of Buddha hanging outside the temple, and in the night, all the butter lamps light up the whole monastery to make the worship all-night. The local Tibetans around villages prepare the butter lamps several days in advance and light them up on that day by putting them along the window side. If you stay overnight here, you can find this region is covered with dim lighting. 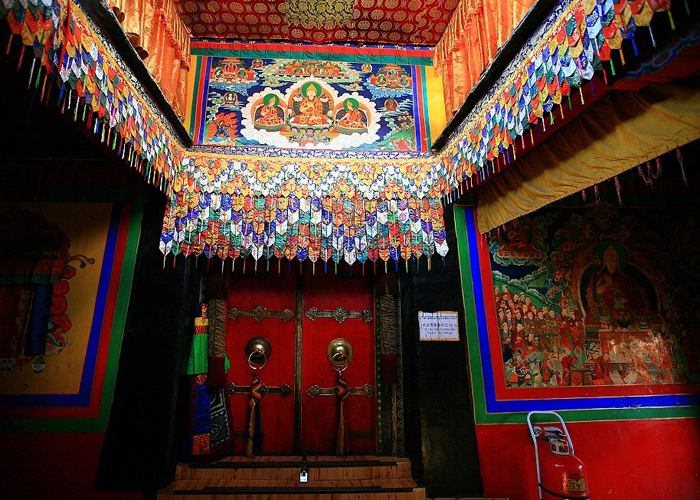 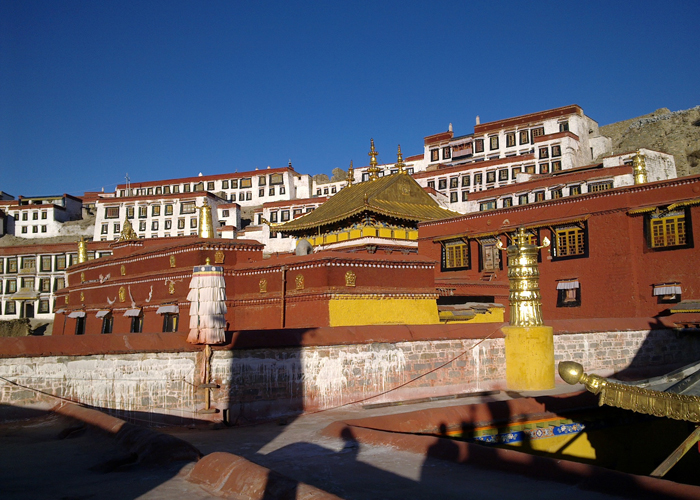 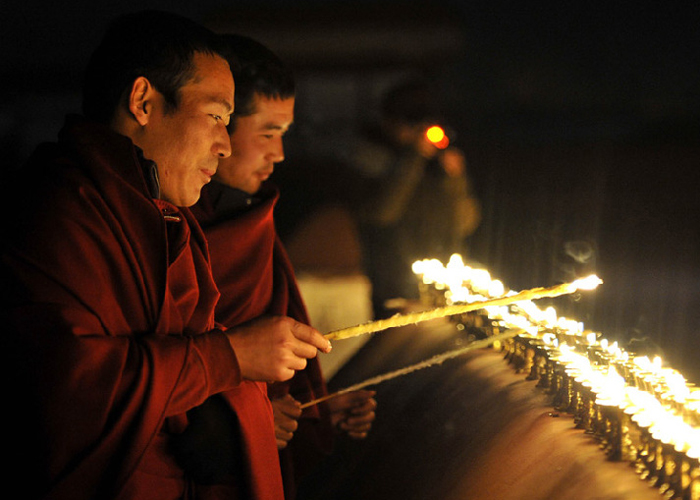 How to Get to Ganden Monastery

Comparing to some other attractions in Lhasa, Ganden Monastery is a bit far from city area. About 50 km away north of Lhasa, it is located in the Dazi County, at the top of Wangbur Mountain with 3800 meters above the sea level. 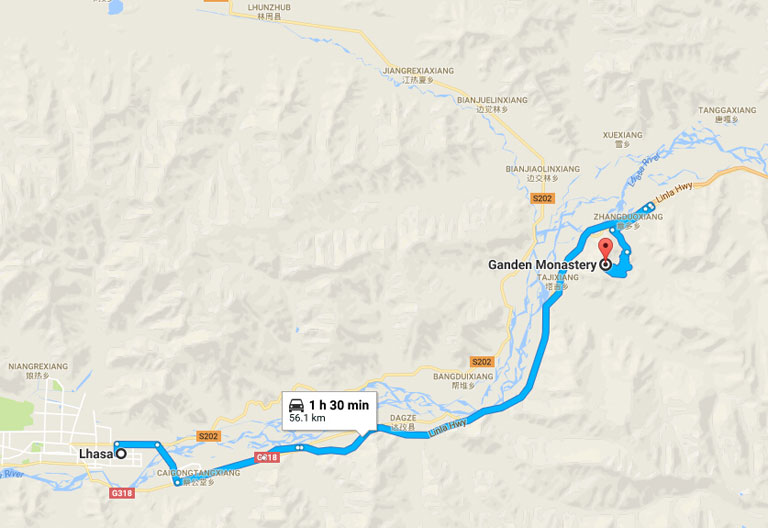 The opening hour of this temple is from 9:00am to 4:00pm, except holidays and major events, with the ticket price for 45RMB per person. According to the local custom, you should visit in a clockwise direction. And do not step on the doorsill and do not smoke in the halls; do not take photos without permission; do not wear hat or sunglasses enter inside. Below are some featured activities in Ganden Monastery:

● Ganden Monastery Kora: If you have enough time, the Ganden Kora (walking in the clockwise), is great experience to meet stunning views of Kyi-chu Valley and encounter large numbers of pilgrims, rubbing holy rocks and prostrating themselves along the path.

● Photography: Summer months (June, July & August) are the best time to visit Ganden Monastery with great scenery and meet the Buddha ceremony during the Shoton Festival on June 30 of Tibetan calendar.

● Ganden-Samya Monastery Trekking: For hikers, the 80 km pilgrimage road from Ganden Monastery to Samya Monastery is worth trying during the months from May to October. In these 4 days trekking trip, you can encounter valleys, temples, lakes, hillside fields, desert, villages, groves and more to experience authentic Tibet nature. 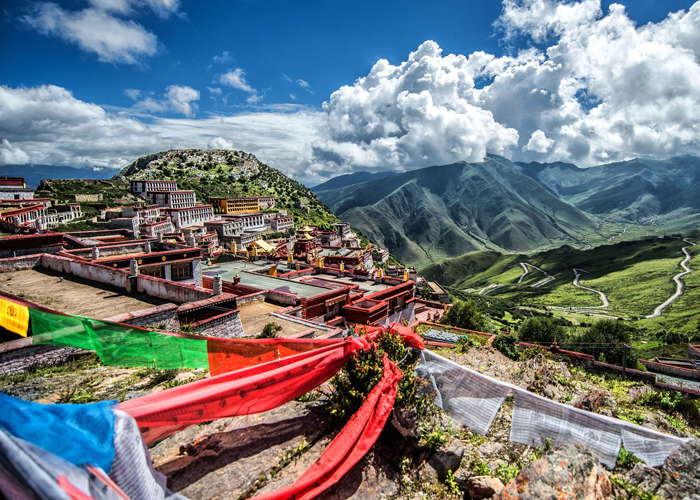