Drepung Monastery - Once the Largest Monastery

Drepung Monastery is one of the three great Gelukpa monasteries, along with Sera Monastery and Ganden Monastery. As the largest monastery of Tibet constructed in 1416, there was a totally 10,000 monks once lived here in the peak times, Drepung Monastery plays an important role in Tibet Buddhism. Located on the Gambo Utse Mountain, it has magnificent complex of white buildings dotted around the hillside. The Ganden Potrang, once the residence for Dalai Lamas (1-5th) before the 5th Dalai Lama built Potala Palace, is the most featured historical building here, which makes Drepung Monastery enjoys the highest status among Tibet monasteries. Besides, the famous Shoton Festival is first to celebrate here, also called Drepung Shoton Festival, given rise to extensive attention and influence among Tibetans. Enjoy your exploratory tour to the most popular monastery to discover the charm of devoted belief.

Drepung Monastery was founded in 1416 by Jamyang Chojey who was famous as the respectful disciple of Tsongkhapa, the founder of Tibetan Gelug Buddhism. Drepung, in Tibetan, stands for “prosperity”. As the name, Drepung started its “prosperity” early after the establishment. After two years, the monastery already had over 2000 monks, and reached its heyday when about 10,000 monks studied and lived here. Since then, Drepung Monastery spread its influence quickly, and became one of the most holy monasteries in Tibetan regions.

Before the 5th Dalai Lama’s removal to Potala Palace, Drepung Monastery used to be the both political and Buddhist center. Since then, Drepung has been a monastery as well as a Buddhism school until today. 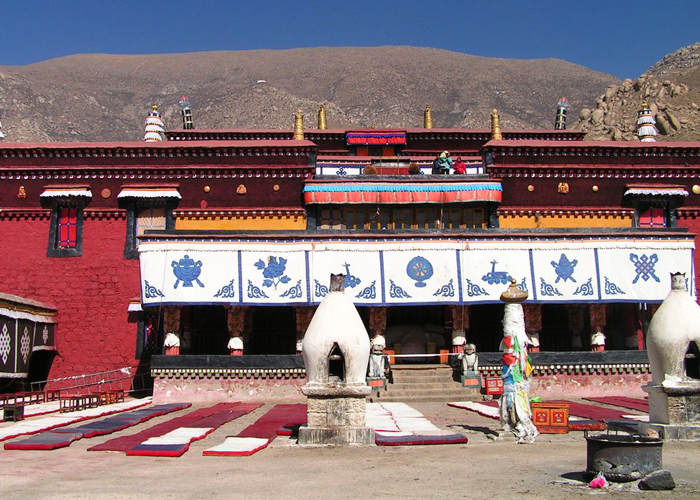 Since Drepung Monastery’s founding in 15th century, many constructions were made. A great many of monasteries, pagodas, chapels have been well preserved. The most important historical buildings are: Ganden Potrang, Coqen Hall, the four Zhacangs (or Tantric colleges) and numerous Kamcuns, subjected to the Zhacang.

Ganden Potrang is a sumptuous palace. It was built by the 2nd Dalai Lama Gendun Gyaco in 1530, and became his presidential palace. The later 3rd, 4th and 5th Dalai Lamas also lived here until the 5th moved to Potala Palace. Ganden Potrang consists of a yard of houses. The main building is a monastery of 3 floors. The first floor is used as holding ceremonies. The second floor is the place where Dalai Lamas works. The third floor is the personal living space for Dalai Lama.

Coqen Hall is situated in the central monastery. Its best feature is the giant bronze statue of Qamba Buddha which was built according the appearance of Qamba Buddha at his age of eight. In front of the Buddha, there is a conch which was gifted by Tsongkhapa. In the 5th, 8th and 15th of every month, the monks will chant sutra for a whole day in the Coqen Hall usually. In the same day, the kitchen will be open to the tourists, from which you can learn about kitchen utensils and cooking material. Standing on the ground before Coqen Hall, you could take a panoramic view of Lhasa city. To get better view, it is also available to climb to the Thangka Exhibition Hall.

Zhacang is the unite of academy in Gelug schools. It includes meeting hall and Bhudda chapels. There are four Zhacangs in Drepung Monastery studying different instructions of Gelug. Each Zhacang has its own chapels, kamcuns and dormitories. The courtyards of Zhacang are used as the stage for Buddhism Debating.

As one of the main Buddhist ceremonies, Shoton Festival is quite grand in whole Tibet and Drepung Monastery is especially known as the center site of this festival, which held on June 30th in the Tibetan calendar. There will be a dramatic unfurling of a giant Buddha tapestry with 80 meters long and 40 meters wide hang on the hillside Thangka Exhibition Platform in the morning, followed with various kinds of Tibetan opera performances and other activities. Begin with Drepung Monastery to spread throughout Tibet, Shoton Festival is one of the best ways to join in the local Tibetans and learn their traditional culture and religion. On this day, many Buddhists and tourists will come to celebrate it.

There are a large number of historical and cultural relics kept in Drepung Monastery. Feature 1 – Chinaware: lots of ornate chinaware from early Song, Ming and Qing Dynasty. Most of them are cups, bowls, and bottles. Feature 2 – Thangka: there are several hundreds of Thangkas mostly made during Ming and Qing Dynasty. The most famous ones are four giant hanging Thangkas themed by the “scholar's four jewels” (writing brush, ink stick, ink slab and paper). Feature 3 – Wenshu Bronzed Mirror: this mirror was carved beautifully with appearance of Wenshu Buddha. The 5th Dalai Lama received as gift from Shunzhi Emperor of Qing. Feature 4 – Buddha Statues: there are thousands of statues of Buddha, Bodhisattva, etc. 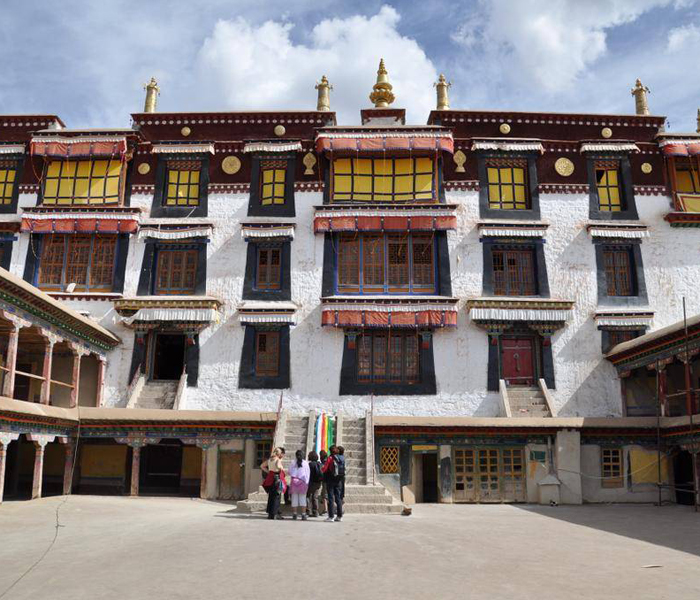 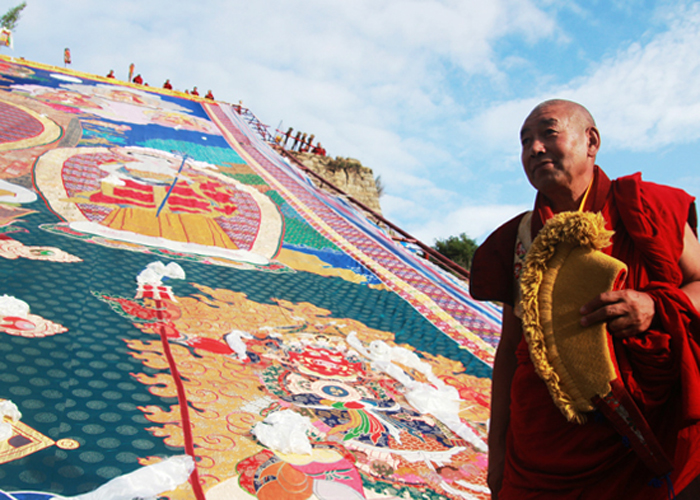 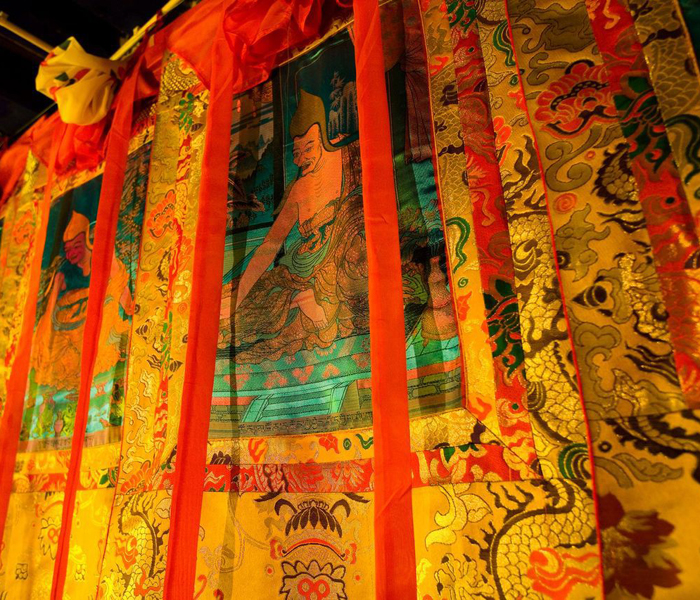 How to Get to Drepung Monastery

Drepung Monastery is situated on the mountainside in the western suburb of Lhasa. With a distance of about 8 km from Lhasa downtown, tourists should better take taxi to get to the gate. Or you can take bus No.24 and 25 within 30 minutes to arrive at the foot of the hill from downtown, then climb 30 minutes up to reach the monastery gate, which is quite exhausted and time consuming.

● 7 km away from Potala Palace

● 4.9 km away from Norbulingka Park

The best transportation is to find a private transfer to Drepung Monastery, which can be easily handled by join our Tibet tours for free and comfortable transfer. Besides, you can visit all above sites or beyond as your request. 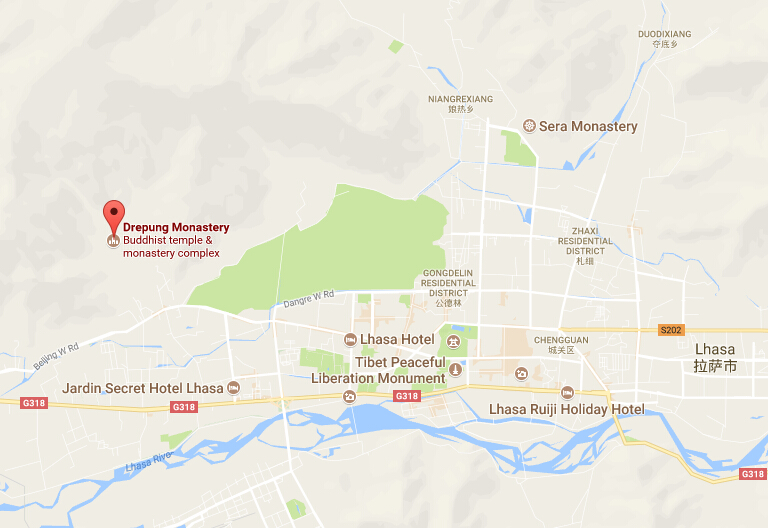 ● Drepung Monastery is opened for visit from 9:00 to 17:00 with 60 RMB for each visitor. If you travel in summer time, don’t miss out the Shoton Festival here to catch the grand scene.

● Before entering the scenic area, you need to receive a security check. Lighters are forbidden to be bought to the monastery. While visiting, you must walk clockwise from left to right.

● Our car will pick you to the park in the scenic area, but you need to walk several minutes and climb some steps to the monastery. If you want to reach the Thangka Exhibition Platform to take a bird’s-eye view of the whole Lhasa city, be ready for more steps and take a rest when you feel tired.

● There is Buddhist debate taken place on 14:30 sometimes. Without the large scale in Sera Monastery, it’s also worth seeing to experience the unique Buddhist argument.

● Nechung Monastery about 500 meters in the southeast direction, is a Buddhist college, features various kinds of rich colored murals worth seeing. 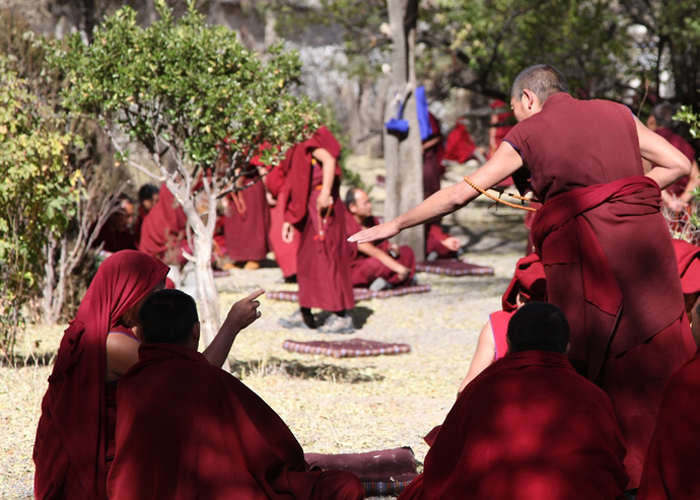 Tibet is too vast to be visited in one single trip, but planning ahead of time can make most of your holiday. A classic Tibet tour always takes about 4 ~ 8 days. Apart from 2 days for arrival and departure, it usually needs 2 other days to explore majestic Potala Palace and other landmarks such as Drepung Monastery in Lhasa, the capital of Tibet. With a day trip’s distance from Lhasa, Namtso Lake is another perfect tour extension if you visit Tibet from May to October.