The overland gateway (Gyirong Port) between Nepal and Tibet is open to foreign travelers, which makes a Nepal Tibet trip much easier. Plan your Nepal Tibet tour now! >
We are very good at designing ideal travel experience of your own in Tibet based on your personal requirements and intrests.
You are here: HomeTibet TrainYunnan Tibet Railway 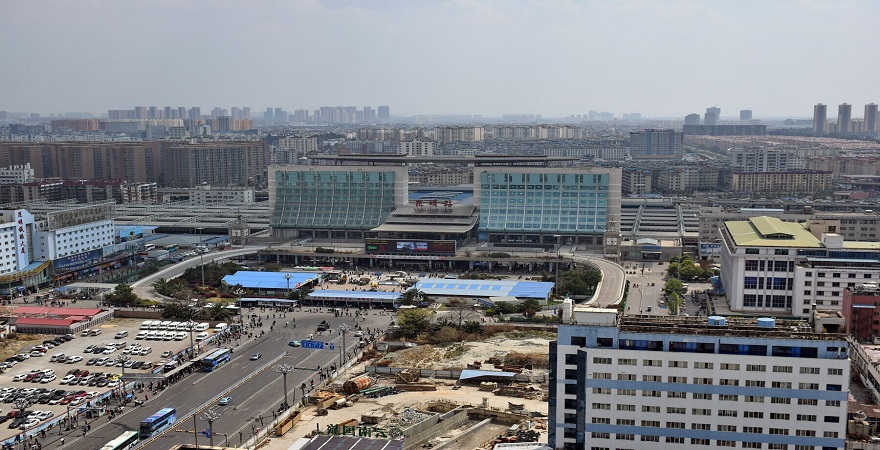 As an important link between central-western Yunnan and southeast Tibet, Yunnan Tibet Railway is the third railway to Tibet after Qinghai-Tibet Railway and Sichuan Tibet Railway. Various cultures and fascinating attractions along the railway make it in great expectation. Now some important sections are still under construction and to be built in future.

Yunnan Tibet Railway belongs to the “Five Railways to Tibet” together with Qinghai Tibet Railway, Sichuan Tibet Railway, Xinjiang Tibet Railway and Gansu Tibet Railway. Various cultures from different ethnic groups and many fascinating attractions along the railway make it in great expectation. Started in 2009, some sections have already been open to traffic, while others are still under construction and are to be built in the future.

People who live in “South of the Clouds”, the so called Yunnan, will have a convenient and fast way to get into Lhasa, the famous “City of Sunlight” after the Yunnan Tibet Railway’s operation. Previously, changes of seasons and weather severely prevent tourists from reaching Lhasa Tibet when they made schedules. In future, tourists in main pass cities, for instance, Kunming, Dali, Lijiang, Shangri-La, Nyingchi can arrive Lhasa within one day and at any time as planned.

It is believed that although the operation time of it remains unknown now, those diverse ethnic cultures and glamourous scenic spots in Yunnan and Tibet will afterwards appeal to more and more tourists. 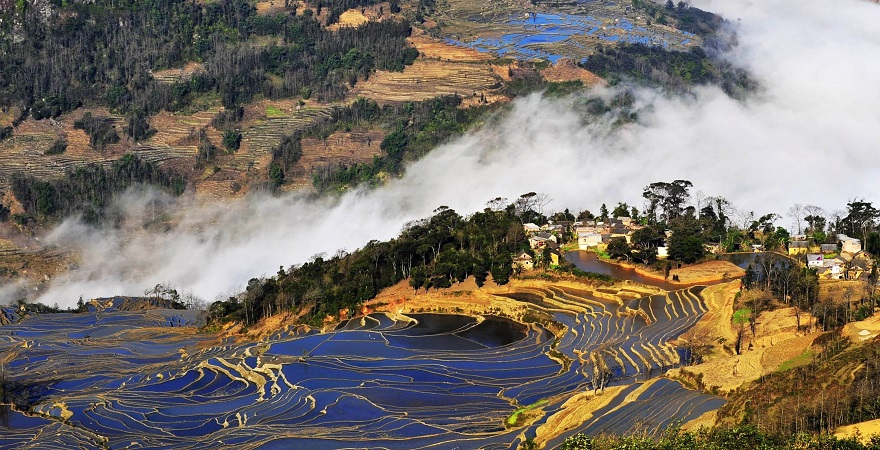 Yunnan Tibet Railway starts from Kunming, capital city of Yunnan Province, extends to west Guangtong, which section is part of Chengdu Kunming Railway, after reaching Dali, the rail goes northwest to Lijiang along the famous picturesque Erhai Lake, then passes through the Tiger Leaping Gorge to Shangri-La. According to a feasibility study report (FSR) conducted by the China Railway No.2 Bureau, the following direction may be that, the line will run across Luole Mountain and Baima Snow Mountain to Dechen, where is the border of Tibet and Yunnan, crossing Langcang River and Meri Snow Mountain to Tibet area, later it will share rail with Sichuan Tibet Railway in MarKam of Qamdo in Tibet, finally join the Lhasa Nyingchi Railway to destination-Lhasa. 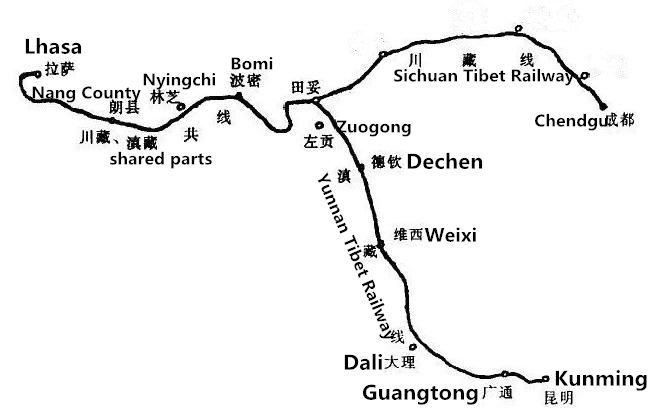 Among the whole line, there is 164 kilometer of Yunnan Tibet Railway was completed, about 161 kilometers are under construction and 300 kilometers are to be built subsequently.

The following information gives you an overview of the construction schedule. 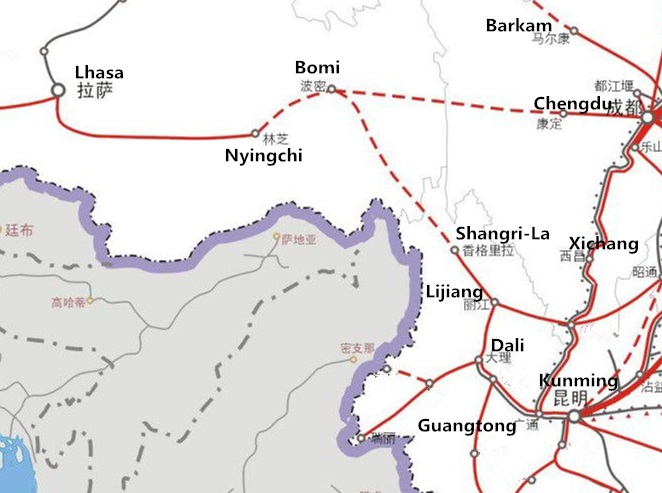 For now, tourists who leave for Tibet Tour from Yunnan have two options: flight and highway, the former one is time-saving and the later one is more economical.

Plane: If tourists want to flight to Lhasa from Kunming, there is about 6 direct flights and 8 transit flights available every day, which usually only takes 3 hours. Also, travelling to Nyingchi from Kunming by plane is another alternative, more than 15 transit flights you can choose.

Highway:Yunnan Tibet Highway is known as “The Paradise of Road Trip”. Many self-driving travelers select this route to experience the beautiful scenery along the road. Beginning from Kunming, passing through Dali, Lijiang and Shangri-La, Yunnan Tibet Highway then joins the China National Highway 318 of Sichuan Tibet Highway in Markam. It normally takes 10 days to arrive Lhasa with full length of over 2,000 kilometers driving distance. Sightseeing include snow mountain, forest, glacier and grassland, thrilling but worthwhile. Due to the complex road condition, highway is not recommended for new comers.

Train: there is no direct train to Lhasa from Yunnan at present, passengers who would like to have train travel experience can take transit train in nearby Chengdu or Chongqing, which takes over 40 hours. Please notice that trains depart from these two cities every other day, not daily. 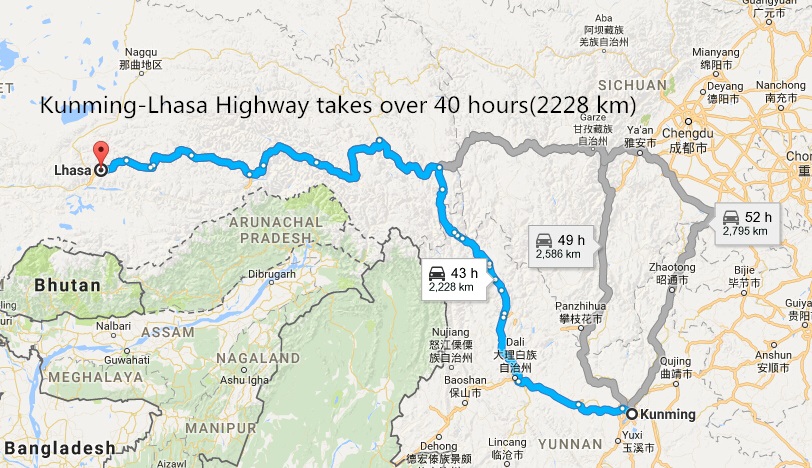 Highway Route to Lhasa From Yunnan 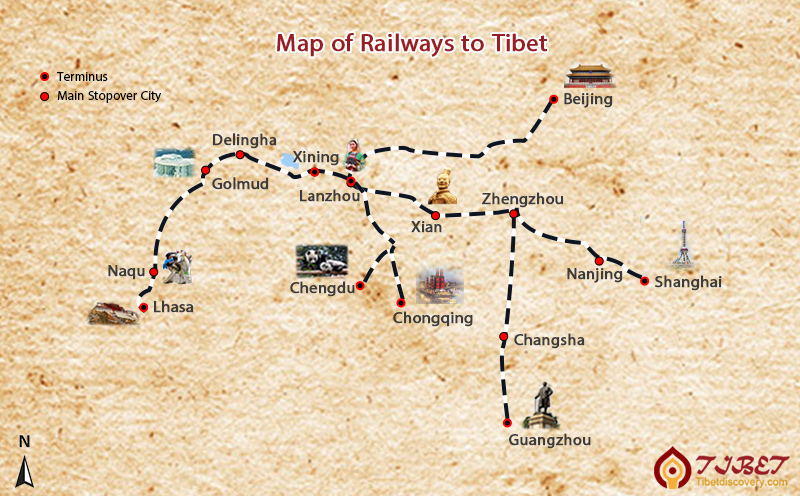 Scenery along the Yunnan Tibet Railway

Yunnan Tibet Railway has the lowest average elevation among the “five railways to Tibet. Dali, Lijiang and Shangri-La are very famous destinations in Southeast China, thus,tourists have chance to enjoy leisure in old towns or Erhai Lake, roam in Dali in blossom seasons, have sun bath and play with cats in ethnic homestay, cycle around Lu Gu Lake, explore “the Lost Paradise” where holy snow-capped mountains stand, etc.

Apart from the charming natural scenery, there are different places of historical interest along the railway, especially in Yunnan and Tibet regions. 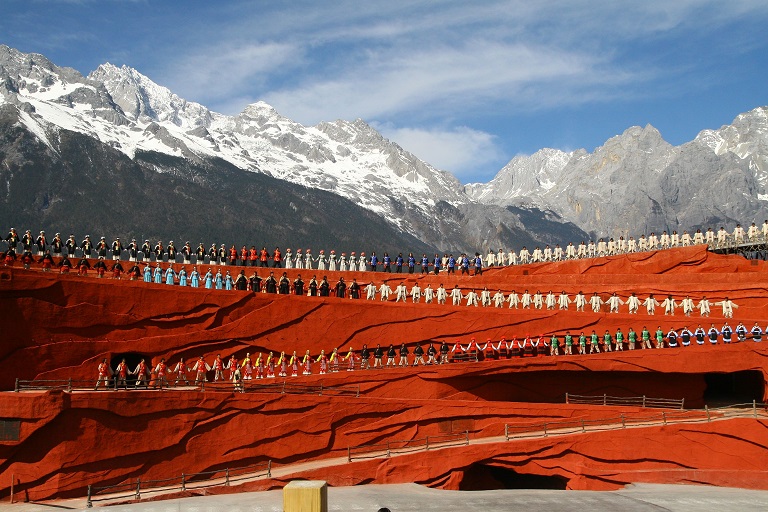 Scenery in Yunnan and Dali