The overland gateway (Gyirong Port) between Nepal and Tibet is open to foreign travelers, which makes a Nepal Tibet trip much easier. Plan your Nepal Tibet tour now! >
We are very good at designing ideal travel experience of your own in Tibet based on your personal requirements and intrests.
You are here: HomeTibet TrainAdjustments of Tibet Train Schedules

With the rapid development of China railway system and more construction of new railways, Qinghai Tibet Railway Corporation has carried out a new Tibet Train working diagram as part of adjustment of China national railway since late December, 2017. Therefore all the trains to/off Lhasa run under the latest operation schedule after changed few departure and arrival time, midway stop stations. There are 5 Tibet Trains (originating from Beijing, Shanghai, Guangzhou, Lanzhou and Xining) changed the arrival time to Lhasa, 7 trains adjusted the departure time off Lhasa. Please note that Chengdu and Chongqing Lhasa Trains changed the departure time from afternoon into night. In order to catch your Tibet train in time for your Tibet tour, please check the following information carefully, and if you have any problems, please feel free to contact us for more advice.

A completely new train operation diagram of Qinghai Tibet Railway Corporation took effect since Mid-October due to the official operation of Lanzhou Chongqing Railway (兰渝铁路). The most important news is that the round-trip Train Z223/Z222 & Train Z224/Z221 between Chongqing and Lhasa, and Train Z322/Z323 & Train Z324/Z321 between Chengdu and Lhasa cancel the previous roundabout stop in Baoji Railway Station from Guanyuan to Lanzhou, but run a new railway route through Chongqing Lanzhou Railway with about 7 hours shorter riding duration and distance. And train ticket fares between Chengdu/Chongqing and Lhasa adjusts to be the same with a little cheaper price of each seat.

According to the new train schedule, total travel duration of Chengdu Lhasa Train is shortened from over 43hrs to 36hrs 18mins, and Chongqing Lhasa Train speed up to about 35hrs, taking about 7 hours less riding. Departure time of train Z322/Z323 from Chengdu and Z223/Z222 from Chongqing to Tibet is altered into the evening from afternoon and arrival time remain in the morning of the third day as before. Meanwhile both trains off Lhasa arrive in Chengdu (Z324/Z321) and Chongqing (Z224/Z221) in the early morning of the third day, much earlier than before. During peak season and important Chinese festivals, tourists are advised to get to waiting room of the departure railway station in advance for you will face long queue in check points. 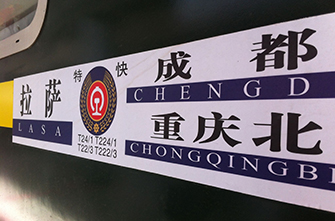 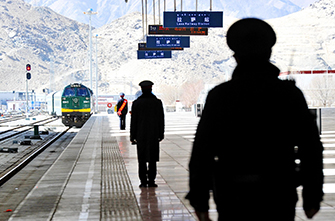 On every other day, the direct train Z322 leaves Chengdu at 21:37 and arrives in Lhasa at 09:55 on the third morning, costing 36hrs 18mins, return train Z322 departs from Lhasa in the 18:35 and get to Chengdu at 6:58 along with 8 midway stations in Guangyuan, Lanzhou, Xining, Delingha, Golmud, Nagchu. Please check following table for details:

Tibet Train Z223 leaves Chongqing in the 22:25 and arrives in Lhasa at 9:55 on the third morning, while Train Z224 departs from Lhasa in the 18:35 and get to Chongqing at 06:23 on day three, which both cost about 36hrs and pass 7 stations in cities of Nanchong, Guangyuan, Lanzhou, Xining, Delingha, Golmud, Nagchu. Please check following table for details:

1. Tibet Train tickets are always in short supply especially during tourism peak seasons(from May to October). So you'd better confirm your trip plan and book the train ticket as early as possible.

2. If you are traveling to Lhasa from Beijing, Shanghai, Guangzhou,Chengdu and Chongqing, you are strongly suggested to take the Soft Sleepers because you need to spend two nights on the train.

3. Tickt price of sleeper berth is various based on which kind of sleeper you book. For Hard Sleeper, fares of the Middle and Lower bunk is a few dozen RMB (yuan) higher than the upper. Lower Soft Sleeper is a little expensiver than Upper berth.