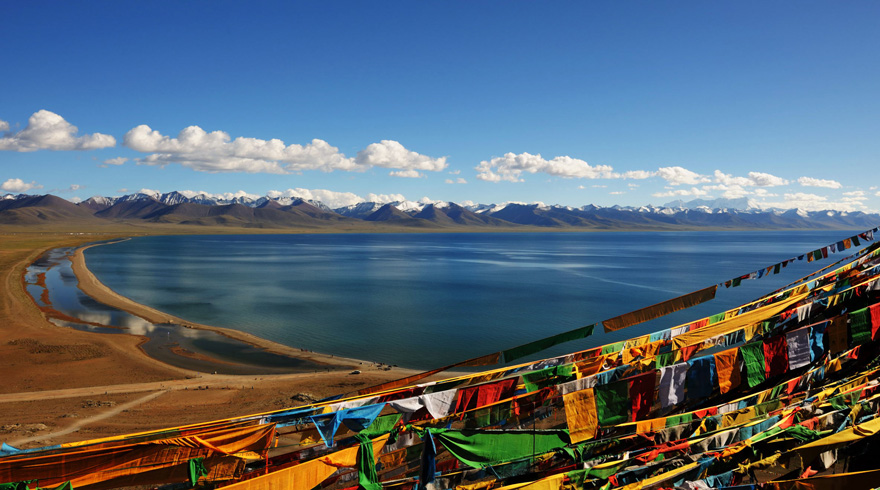 Use Your Lens to Record the Breathtaking Landscape of Namtso Lake

Namtso Lake - the Paradise for Photographers

Like a maidenly and attractive lady, Namtso Lake lies beautifully in the arms of her lover - Nyenchen Tanglha Mountains. On the holy and high Qinghai Tibet Plateau, she is the brightest sapphire, attracting thousands of travelers from around the world to witness her beauty each year. To Tibetan, Namtso, together with Nyenchen Tanglha Mountains, are their Guardian Angels who bring them the happiness, healthiness and harvest. Despite of the all the hardship on the road, they walk hundreds miles, maybe from Lhasa, from Shigatse or other far places in Tibet, to Namtso Lake to express their worship to the Guardian Angels, and bless for good wishes from the Guardian Angels Namtso and Nyenchen Tanglha.

This is the Namtso, the “Holy Lake” of Tibet, the second largest salt lake in China, the highest-altitude lake in the world. Even if you don’t believe in the local myth, but when you witness the ultimate blue on and above the Namtso Lake, you will feel a magical power rising from the bottom of your heart, which drives you to prostrate yourself in the worship to the Goddess of Namtso, or the Mother Nature. Then you will realize that the beauty of Namtso is not only from the holy lake and mountains, but also from the magical power which can purify your eyes, soul and your lens.

Check our most popular Namtso Lake tour packages below:

Namtso Lake is located at the junction of Lhasa and Nagchu Prefecture. It is only about 240km north from Lhasa, approximately a driving of 5 hours. You also go to Namtso Lake from Nagchu if your train stops at Nagchu Railway Station. From the railway station, you have to drive about 220km to get to Namtso Lake. Generally speaking, most travelers have chosen to transfer to Namtso from Lhasa because the altitude of Namtso Lake is too high (4718m) to acclimatize in the first one or two days. The suggested idea is to spend some days in Lhasa for acclimatization where the altitude is only about 3700m. Damxiong Town, about 60km from Namtso Lake is a great place for a rest, a lunch. If you feel hard to acclimatize yourself to the high altitude, you can spend a night at Damxiong Town first, and go to Namtso on the next day. On the driving to Namtso, travelers will have to drive cross the Nagenla Pass (5190m), where you can get a wide view of Namtso Lake . Many tourists would like to take photo here to memorize their trip, as the Namtso Lake is just around the corner. 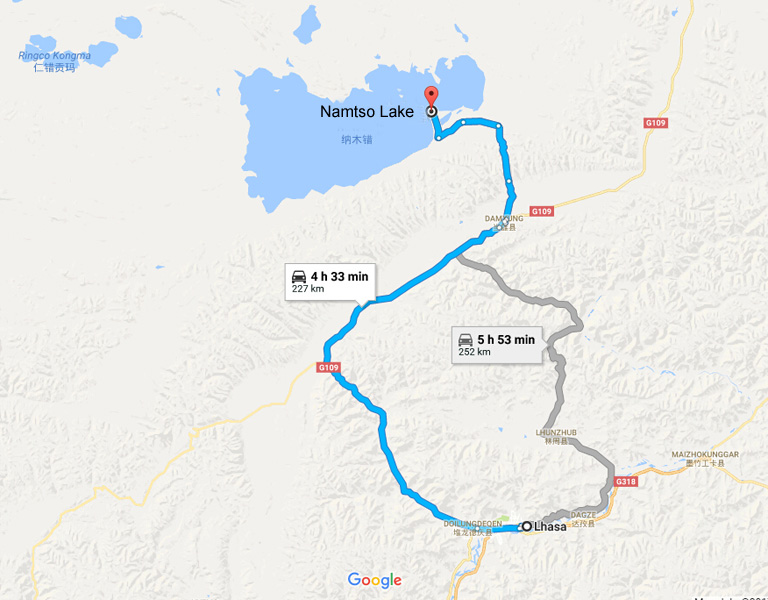 Namtso Lake is the first highlight you have to shoot for some great photos. The lake is 70km long from west to east and 30km wide from south to north, covering an area of more than 1940 square kilometers. There are usually no terrifying waves as the Namtso is a forbidden lake without big rivers flowing in and out. The surface of Namtso Lake is always as clean and bright as a giant mirror which reflects the beautiful views of blue sky, white cloud and high snow mountains. Blue is the color of Namtso, but you can see many kinds of blues – soft blue, dark blue, stone blue, royal blue, black blue… Firstly, you will see the royal blue lake connects to the blue sky which has several floating white clouds hanging in the air. Then move your eyesight to the beautiful Crescent lakeshores where you can find white tents and herds of Tibetan nomads. All these scenes can be put in a single photo. Early morning and dusk are two best hours to take photos of Namtso Lake when the sunlight and shade mingle together, and the colors on the lake changes bizarrely. Don’t miss the dusk time to shoot the sunset – the red and firing clouds crowd together, forming a cloud wall above the west edge of the lake; suddenly a golden ray of sunlight penetrates the clouds wall, and dyes the lake shore and lake red. It is very likely this stunning moment only happens for several minutes. So you have to observe the weather change and get ready. The middle of the daytime is great for you to have a walk and take photos of blue sky and lakes.

Near the southern shore of Namtso Lake dominates the magnificent Nyenchen Tanglha Mountains. The main peak is Mount Nyenchen Tanglha with an alevation of 7,162 meters (23,497 ft), can be seen clearly encircled by its little-brother-like snow mountains. These snow mountains form an incredible long, high and giant wall standing on the southern shore of Namtso Lake. In the early morning when the sunrise starts, the light sunlight firstly shines on the summit of Mount Nyenchen Tanglha, makes it look like a golden pyramid. As the sky getting bright, the snow mountains will show silver lights and leave their grand shades on the lake. Sometimes, there are several white clouds flying pass by, stopping and floating above the mountains. Everything is so quiet and beautiful.

As the “Holy Lake” of Tibetan, Namtso attracts thousands of pilgrims to worship every year. It is a great chance to record their inspiring believes in your photography. But remember to ask for permission before you taking photos. Or don’t take too closer photos. The kora encircling Namtso Lake is very popular among pilgrims, and needs about 15~20 days to finish. They throw the tributes into the lake, and pile a Marnyi Stone near the lake shore to seek for bless from the God.

The rich water resource creates vast lands of fertile pastures at the periphery of Namtso Lake. It is a great chance to explore the local Tibetan nomads’ living. The pastures are the paradise for the animals. Majority of the animals are the yaks. Yak trading is the biggest income for local Tibetan. There are also many wild lives, such as Mongolian gazelles, marmots, hares, etc. In the summer days, the pastures all turn into a vast green. While in autumn, the pastures will be divided into slides of different colors. All these wonderful things will let you feel the geniality of our Mother Nature. Looking carefully you will see sporadic white tents of nomads with rising smoke from kitchen chimneys

Tibetan people believe that the stones are zoetic and intellectual, so they carve Buddhist scriptures and Buddha on the stones to communicate with Gods. These carved stones are Marnyi Stones. Special pigments which are locally produced are used to paint or write on the stones so that the colors can retrain for a long long time. Sometimes Tibetan will place a bone of yak head on the stones , standing for the spectacular Tibetan culture. The colorful prayer flags are a beautiful scene to shoot. They are usually hanging over the hills.

The friendly Tibetan is a good photography theme for documentary photographers. At Namtso Lake, you will have chance to explore the real and traditional living of Tibetan. You can record their daily living and their artworks, such as Thangka. Besides the local Tibetan, you can also go to visit some local monasteries where you can take some special photos. There are some monasteries located along the lake shores. Duo Qiang Monastery (多恰寺) is the largest one with not many monks. It is located on a nearby island with many meditation caves. Remember not to disturb the meditation of the pilgrims. 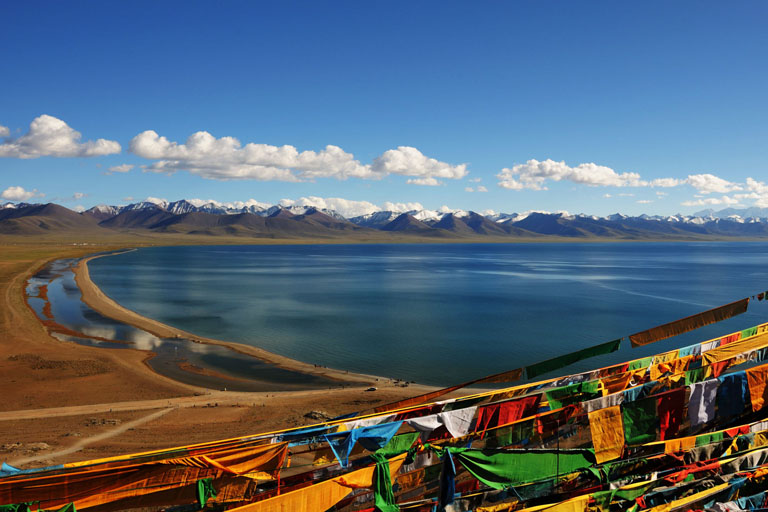 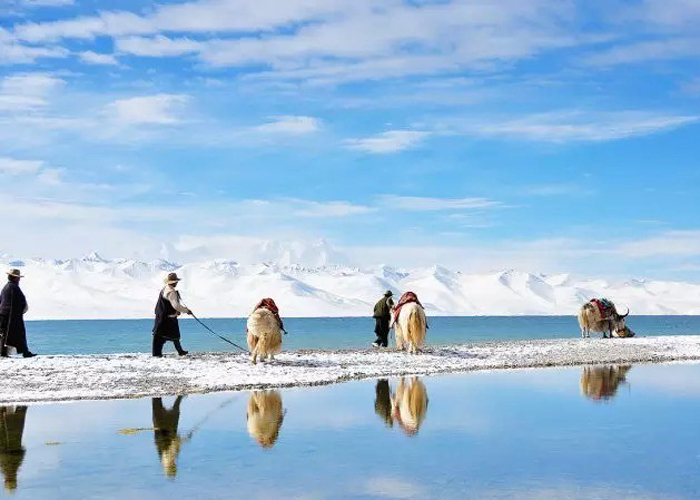 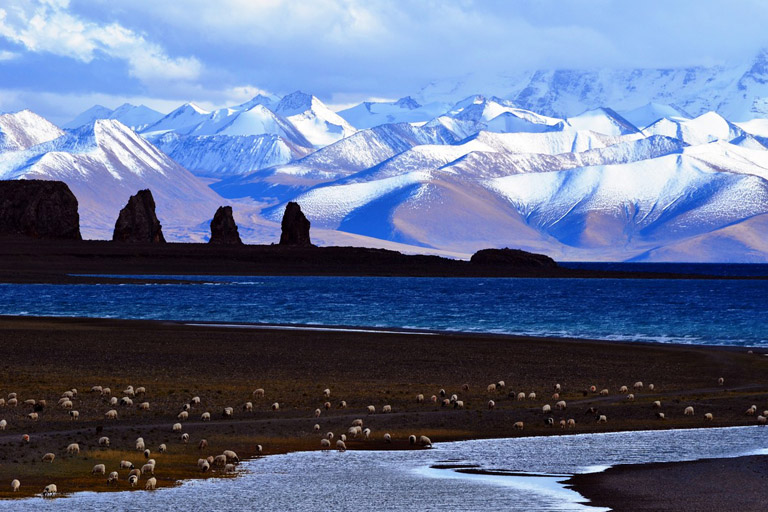 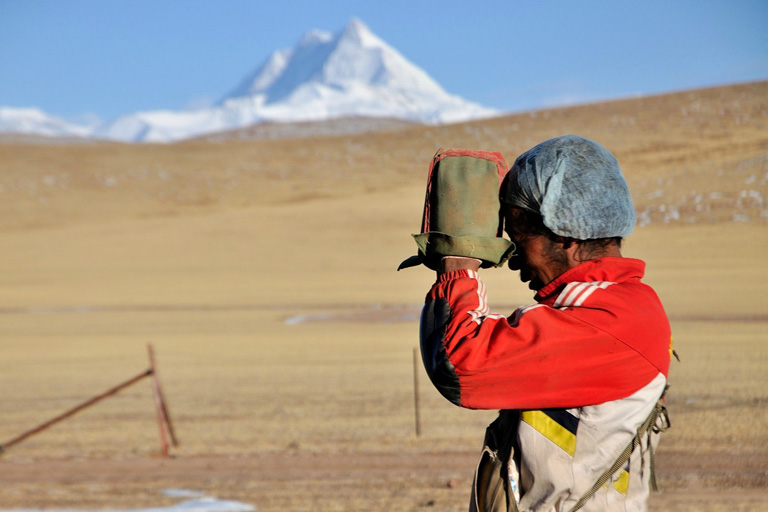 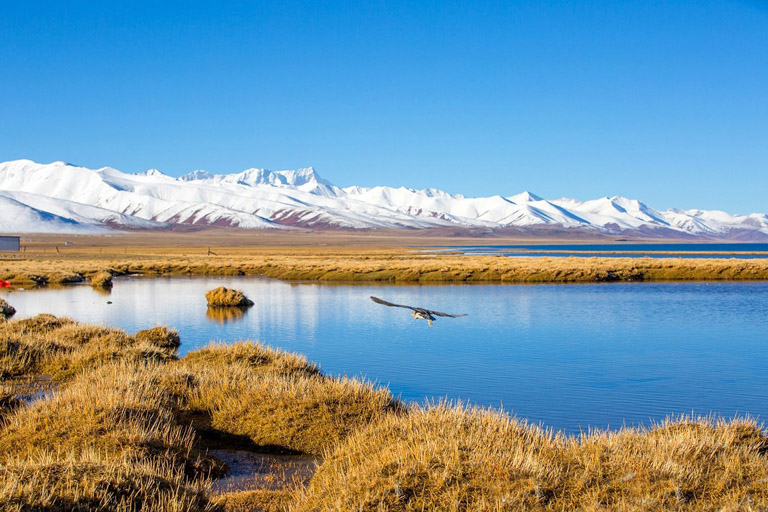 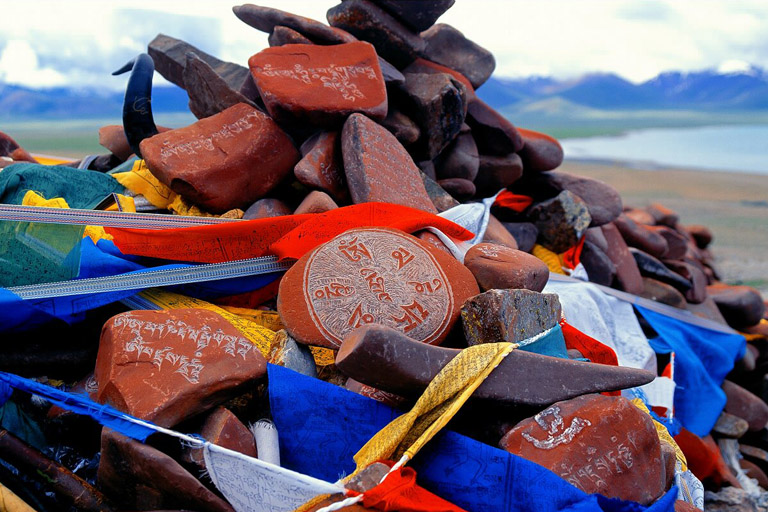 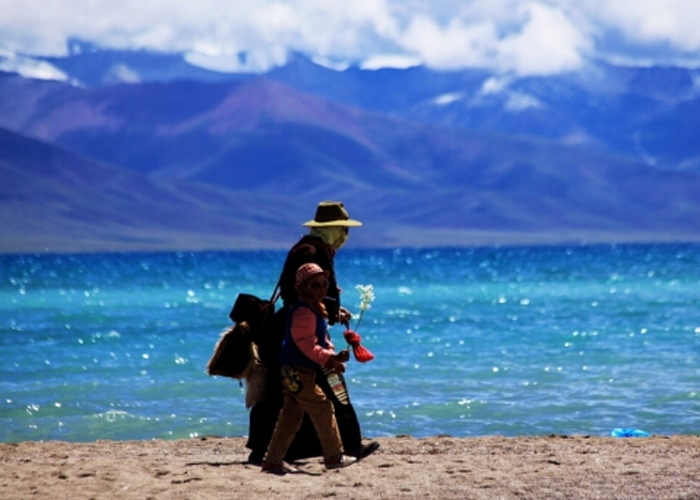 Local Tibetan on the Kora

You’d better not visit Namtso in December, January and February when the attraction is usually closed for maintenance for the strong snow. Besides, it is very dangerous to drive on the icy road to Namtso, and the guest houses and restaurants also retreat during that period. You are suggested to visit Namtso Lake during June to September, especially August, when the temperatures are pleasant, the sky is pure and grasslands are green. Besides, you can enjoy a better condition of accommodation and dinning. Learn more about Namtso Weather and Climate >

Accommodation and Dinning at Namtso Lake

To protect the environment of Namtso, permanent buildings like hotels are not allowed to be constructed at Namtso Lake, which means there is no normal hotel you can go to accommodate in. Currently there are only some guesthouses constructed by iron sheets. They are usually not large but clean, equipped with warm quilts. There are different rooms, including standard room, triple room, 4-pax room, 6-pax room, etc. Private bathroom is not only available. Some backpackers choose to stay in camping tents which is cheaper but not as warm as iron-sheet guest houses. Electricity and water (no running water) are offered in the guest houses. The night is very cold at Namtso Lake, you’d better bring warm clothing, hat, gloves and scarf.

Never have the idea to wear a T-shirt on the Namtso trip even if the temperature is more than 20°C. You have to wear for the cold air, strong wind, and possible change of weather, which means you should dress in layers that can be easily added or removed. A down jacket (better with hat) together with other warm-keeping clothing is necessary for the later afternoon and night. No matter you wear a jacket or a shirt, it should be long-sleeved. A pair firmed, water-proof, warm-keeping and well-fitting shoes are recommended. You can wear a hat and neckerchief to protect your neck from sunburn in the daytime. 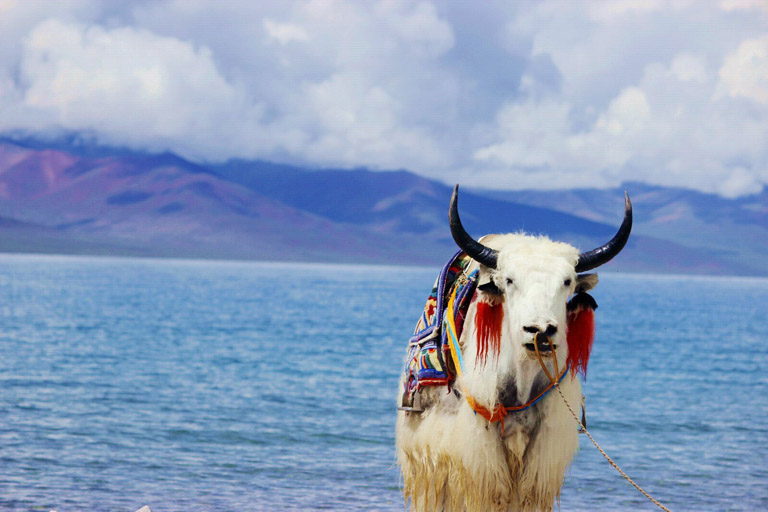 A Yak at Namtso Lake 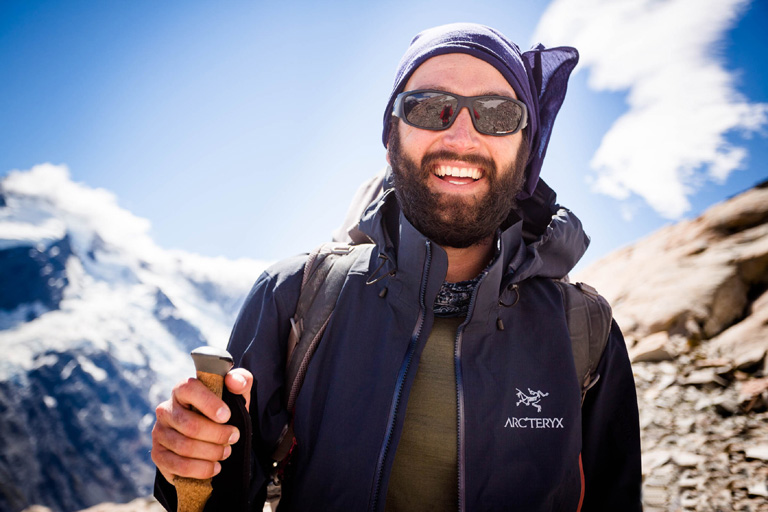 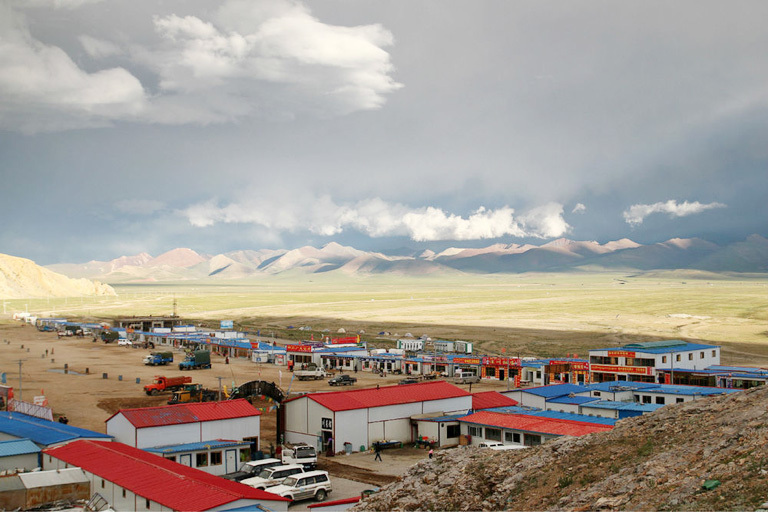 1. You are suggested to spend several days in Lhasa first as acclimatization for the high altitudes, then go to Namtso Lake for photography;

2. An in-depth Namtso Lake photography tour usually need two days so that you can have enough time to shoot sunrise, sunset and starts sky. If you suffer from high altitude sickness, you’d better not stay a night at Namtso Lake. The high altitude sickness becomes worse in the night. If you really want to stay for more time, you can transfer 60km to Damxiong country where you can enjoy better accommodation, and the altitude is lower;

3. The water of Namtso Lake is not drinkable. And the food and drinks are very expensive in the stores at Namtso. So you can bring some food and snacks with you;

4. Taking good photos usually needs a lot of walking. While at Namtso Lake, you must always keep in mind that you may suffer from high altitude sickness if you walk too much, walk too fast. Safety comes the first, then the photography.

Take one of our classic tour packages which have been successfully operated for many years and created loads of amazing experiences for our customers to explore the breathtaking landscape and unique culture of Namtso Lake! You can also let us design a Namtso Lake Trip to match your personal needs and interest.