Lhasa, the holy city of Tibet Buddhism and the political, economic, cultural and religious center of Tibet Autonomous Region, is located in the middle of Qinghai Tibet Plateau, north of Himalaya Mountains. It is one of the highest cities in the world at an average altitude of 3,650m (11,975ft). The geographical features are a low-lying South High North, tilt from east to west, flat Lhasa River valley plain in south central Lhasa.

Known as the landmark and symbol of Tibet, Potala Palace is the biggest, the best preserved ancient palace in Tibet, also the highest palace in the world. Build at an elevation of 3,700m ( 12,139 ft), Potala Palace is situated on Marpori Mountain (玛布日山, also called “Red Hill”) of Lhasa Valley, a suburb area about 2km of northwest Lhasa City.

It is a national 5A scenic spot and a world cultural heritage, covering an area of 360,000 square meters. The front area is the Potala Palace Square, and the back is a quiet and peaceful park named Zongjiao Lukang Park, which is opened to the public for free. The 3,725m high Mountain Chakpori (药王山), on the right side of the palace, is the best photography position for beautiful view of Potala Palace.

- About 60km away from Lhasa Gonggar International Airport

- About 10km away from Lhasa Railway Station

- About 3.5km to Norbulingka, for 10mins driving

Namtso Lake is one of the holy lakes in Tibet (together with Yamdrok Lake and Lake Manasarovar). Located in Qinghai Tibet Plateau and northwest border of Lhasa and Nagchu prefecture, Namtso Lake is the highest lake in the world with a lake surface elevation of 4,718m (15,479ft), having a landmark of the 5190m high Nagenla Pass. On the north is the plateau hilly, average elevation is 5,000 ~5,500m above sea level, the terrain slopes gently, while the south and east side is the valley of Gangdisê Mountains (冈底斯山)and Nyenchen Tanglha Mountains（念青唐古拉山脉）, altitude ranging from 4,000 to 4,300m, gradually increase from south to north.

- About 210km away from Lhasa Railway Station

- About 250km away from Lhasa Gonggar International Airport

The Jokhang Temple, a Tibetan Buddhism monastery with over 1300 years’ history, is regarded as the most sacred and important temple in Tibet. Pilgrims devoutly kowtow before the temple which is at an elevation of 3,650m all day long. The monastery lies in the center of Lhasa old town area surrounded by the polygonous Barkhor Street. For its significance, there is an old saying circulated among the local Tibetans: Lhasa City was built after the Jokhang Temple.

- About 1.5km away from Potala Palace

- About 4km away from Norbulingka Palace

- About 60km away from Lhasa Gonggar International Airport

- About 10km away from Lhasa Railway Station

The Barkhor Street, one of the most famous circumambulation routes and the most prosperous mall in Tibet, elevated about 3,650m above sea level. This street is actually a large living area of old blocks, now is in the central Lhasa. As polygonal street circuit, it is suffused with over 120 handicraft shops, 200 Vendors' stalls selling all kinds of Tibetan style goods.

- About 1.5km away from the Potala Palace, for nearly 20 mins walking

Drepung Monastery, together with Sera Monastery and Ganden Monastery are the three great temples of Lhasa. This temple is known as the biggest monastery in the world at an altitude of 3,800m, located at foot of Gambo Utse mountain, about 10km from the south suburb of Lhasa.

Build down the hillside, Drepung Monastery is surrounded on three sides by high mountains, a sloping land in the south covered by trees and shrubs. Tourists who take trains to Lhasa can look out this temple in the Lhasa Railway Station, which looks like a huge rice-pile.

- About 15km away from Lhasa, for 40mins driving

Famous for the unique Tibetan Buddhism Scriptures Debating, Sera Monastery is one of the six main temples of Gelug sec, a prime faction of Tibetan Buddhism. The monastery is located on the Serawoze Mountain at an altitude of 3,700m, approximately 3km from the north suburb of Lhasa.

- About 8km away from Potala Palace for 25mins driving

- About 7.5km away from Barkhor Street

- About 13km away from Drepung Monastery for 40mins driving

Norbulingka Palace, the previous summer palace of Dalai Lamas, is the largest and the most beautiful artificial garden in Tibet. It is in the west suburb of Lhasa about 3,650m above sea level. Covering an area of 360,000 square meters with more than one hundred species of plants, Norbulingka Palace is considered to be a highland botanic garden. Each year, Norbulingka is a major activity center in Lhasa during Shoton Festival.

- About 3.5km away from Potala Palace, for 10mins driving

- About 7km away from Drepung Monastery, for 20mins driving

The Ganden Monastery is one the three great temples in Lhasa, and the ancestral temple of Gelug sec. Located in the Wangbori Mountain, south coast of Lhasa River, Dagzê County, northeast of Lhasa, the temple is prepared and built at an altitude of 3,800m by the founder of Gelug sec - Tsongkhapa in the 15th century of Ming Dynasty. It's one of famous trekking starting places of Tibet.

- About 56km away from downtown Lhasa, for 1.5hrs driving

- About 60km away from Potala Palace, for 1h50mins driving 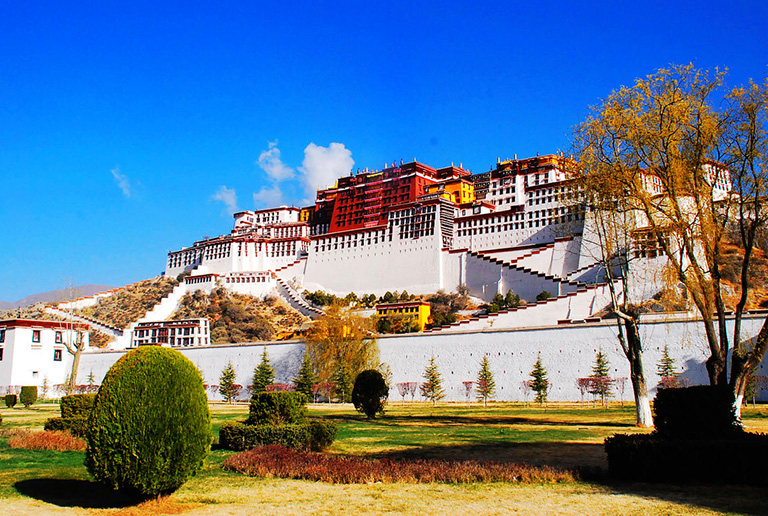 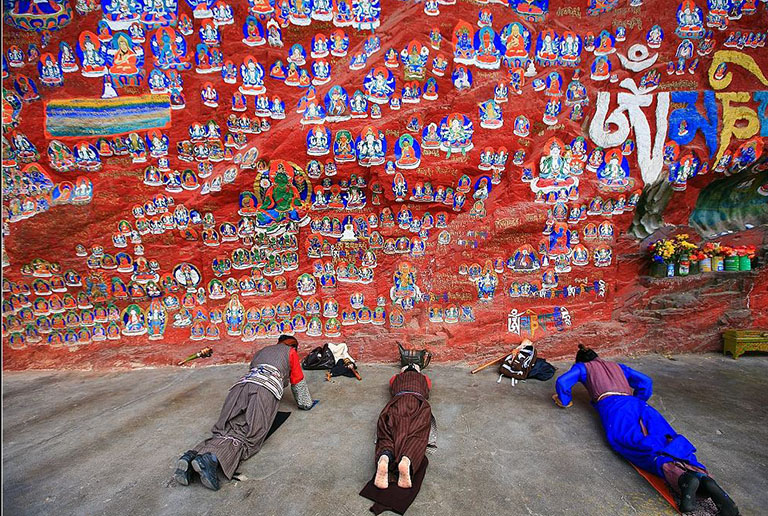 Portray of Buddhas On Mountain Chakpori 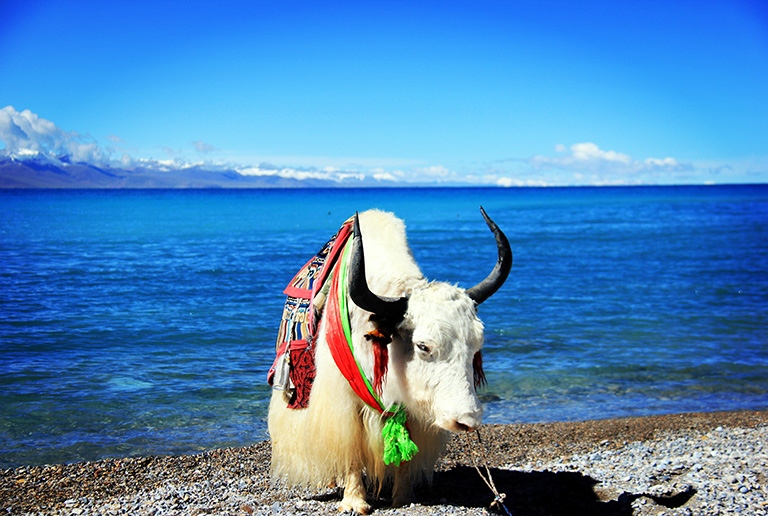 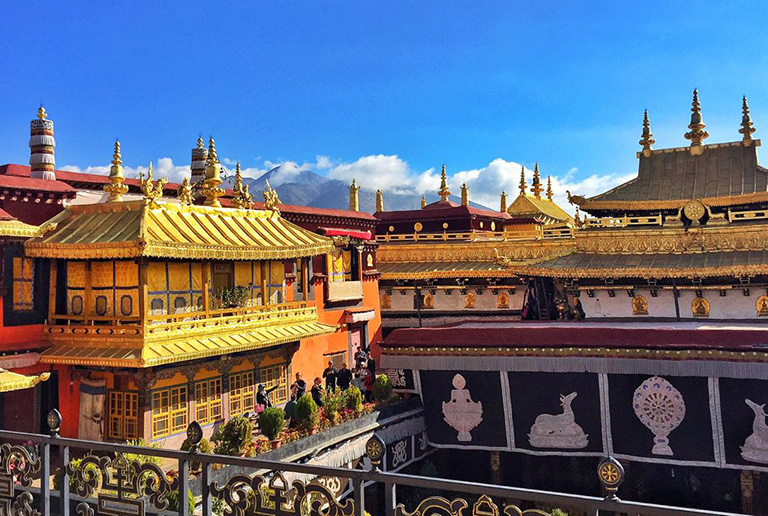 The Most Sacred Monastery - Jokhang Temple 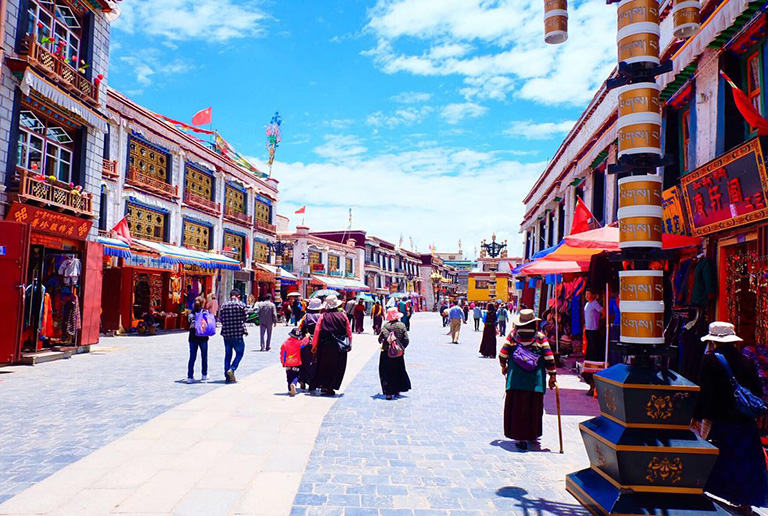 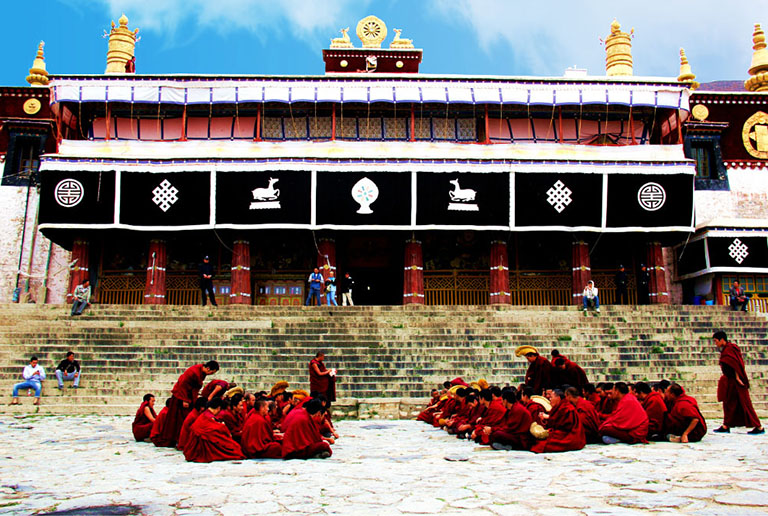 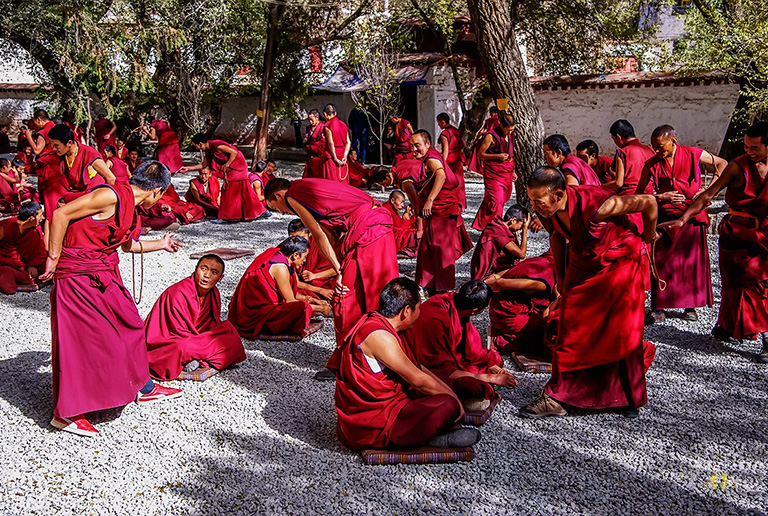 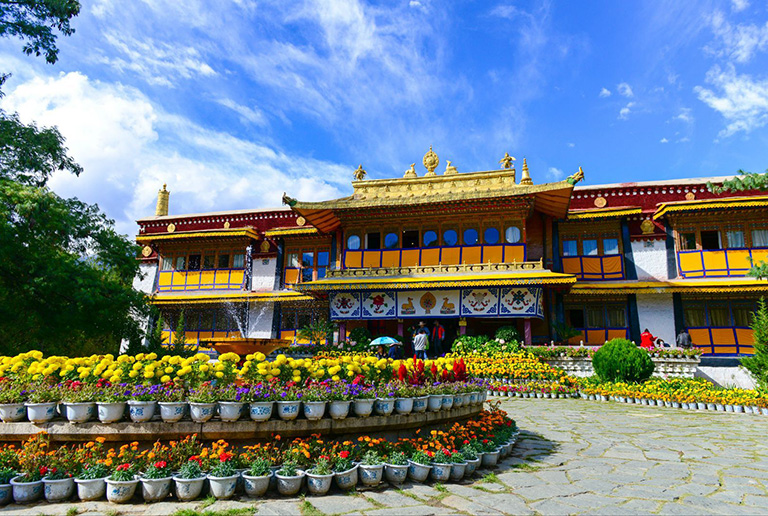 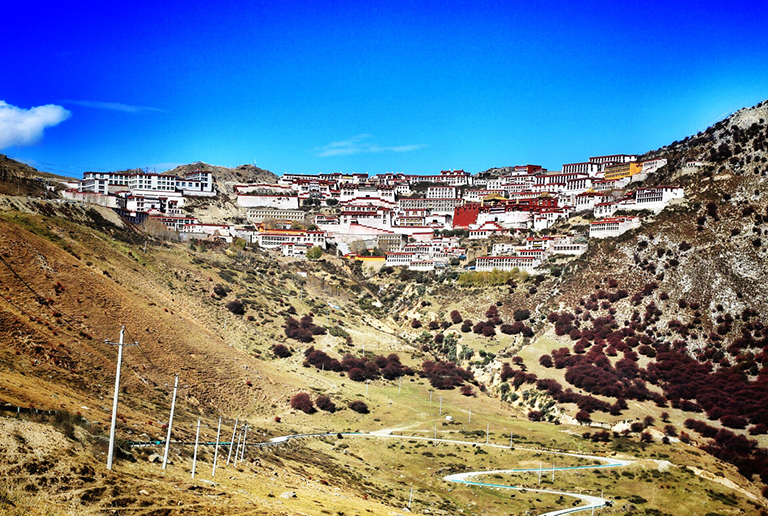 Lhasa Tibet is awed to most people for its high elevation and thin air condition on Qinghai Tibet Plateau. Being a world class famous destination, Lhasa has receives more than 23 million tourists in 2016, among them, there are nearly 322,000 foreign tourists visited Lhasa last year.

Actually, high altitude reaction is related to many factors, such as the elevation, inhabit time, speed of altitude change and personal physique. To help every tourist go on the Tibet tour smoothly, we offer some advices on High Altitude Sickness for your consideration.

1. Have a full physical examination before you enter Tibet. Especially check your cardiopulmonary function carefully. Patients who has hypertension, heart disease, asthma, respiratory disease, cold and other relevant illness are not recommended for high altitude tour according to the professional advice from doctors.

2. Take or prepare some necessary medicines to relieve altitude response, like Rhodiola rosea before you setting out.

3. Keep a good state of mind and physical health for your forthcoming Tibet tour.

1. You’d better not to take a shower in the first two days after your arrival.

2. Don’t do strenuous exercises, including running, fast walking and etc.

3. Drink a lot of water and eat more vegetable and fruit, but should not too full.

4. No smoking and drinking.

5. Not to take sedative hypnotics.

6. Do some relaxing walking slowly to adapt the new environment.

7. Keep warm from getting cold.

8. Have a high carbohydrate diet every day in the tour. 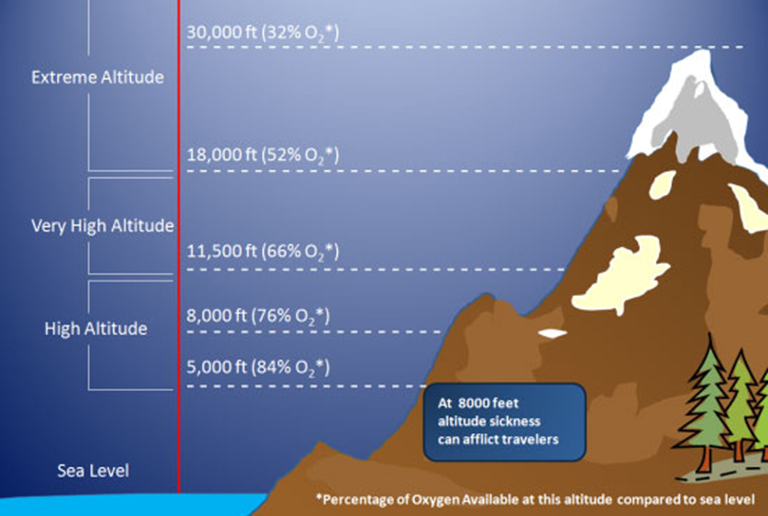 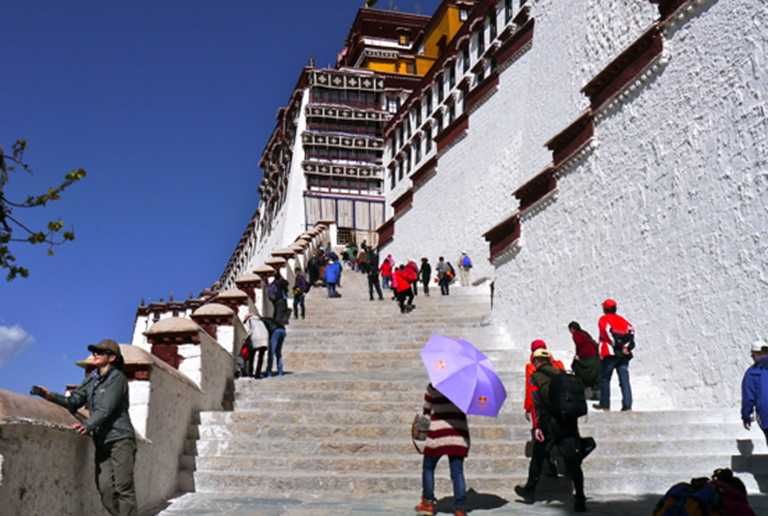 If you have severe high altitude reaction, you have to contact the local Tibet guide as early as possible to receive medical treatment in local Tibet hispitals. You can contact us get more helpful advice.

You are here: HomeTibet DestinationsLhasaWhat to Do in Lhasa
My wish list