You are here: HomeTibet DestinationsGyantse Best time to visit Gyantse

Gyantse - “the pinnacle of success” in Tibetan language, is in the south of Tibet, eastern side of Shigatse Prefecture. As a must passing through place from Sakya, Shigatse and Yadong Port to Lhasa, Gyantse is located between Gangdis Mountains and Himalayas at an average elevation of 4,000m, lying north – south high, intermediate and west low.

The area is a plateau monsoon climate with sufficient sunshine, strong ultraviolet radiation, large temperature difference between day and night and small yearly temperature difference. Gyantse has a clear dry and wet season. It’s humid and wet in summer days for high rainfall, but dry and cold in winter. Frost-free period in Shigatse is short to about 110 days per year. And sunshine duration is as many as 3,100 hours annually.

When is the Best Time to Visit Gyantse?

Because of its high elevation, Gyantse's climate is extreme. Even in summer (May to September), at night or in shadow it can be very cold, and the sun is intense. Winter (November to March) is severe cold, largely dry and snow-free. In winter, January temperature averages -2ºC. Eastern Tibet has a monsoon season with high rainfall from around July to October. Spring and autumn weather varies wildly, often during a single day, so be prepared.

Thus, April to October is the best time for you to visit Gyantse. Although it's cold and exceptionally dry during winter, there are less tourists so you can make your Gyantse experience more authentic.

Spring comes expectedly later in Gyantse and in almost all Tibetan areas than inland cities in China because the high altitude geography. You may feel a little bit cold on January to March, maybe even some snows. It’s beginning to get warmer on April when famers start to plant highland barley, dance for gods and seed in spring days.

Rains brought by summer monsoon fall in Gyantse intensively in summer day, making Gyantse “A City of Flowers”. The abundant rainfalls offer good condition for crops and rape flower. Former impression of deserted and dusty Gyanste is corrected into a grand granary with a magnificent view of rape flowers. Each summer holidays, numerous tourists from worldwide are attracted to the Gyantse Rape Flower Festival hosted by Gyantse County Government.

Another popular pageant in Gyantse during summer is Dama Festivel (also calls horse racing festival) which is hold on from April 10th to April 28th to gather together, drink and watch colorful sports performances, lasting for about one week.

You can describe Gyantse in autumn as a golden city as if this ancient city envelope its self in a golden forest, including temples, buildings, the old Tibetans and puppies. Highland barley will be ripe on September and be reaped in late October.

Hardly can you see sky flying snows in winter Gyantse except the glaring sunshine. The only thing you can feel in attractions such as cold Khrola Glacier is rumble wind in your ears and barely tourists in sight. 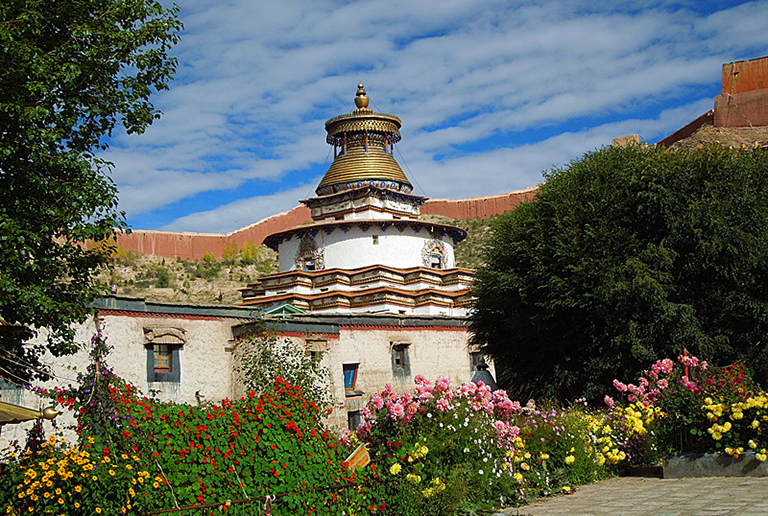 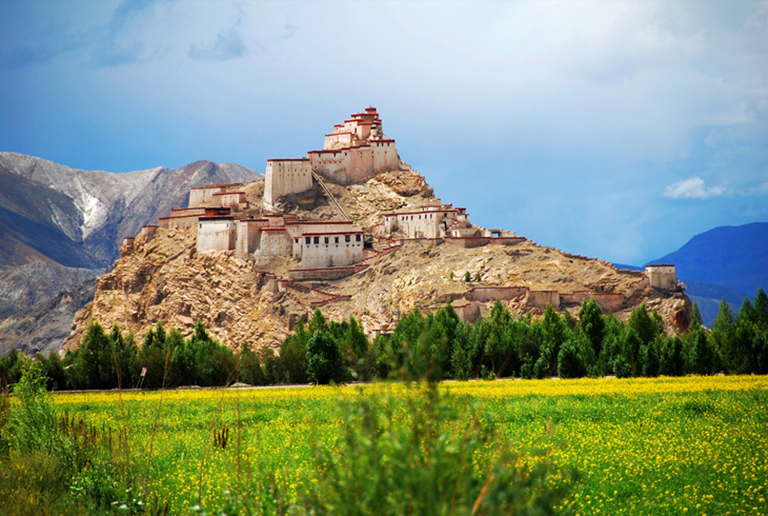 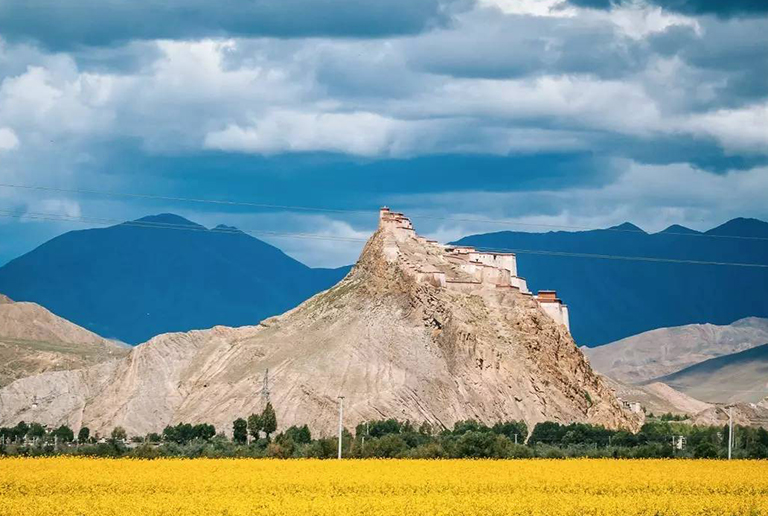 Colorful Scenery of Lhasa in Autumn

What to See in Gyantse

There are three famous historical and cultural relics in Gyantse you can’t miss.

Palkhor Monastery – the well-preserved religious museum combines architecture, painting and sculpture into one. Build in Ming Dynasty and lasted construction for ten years, Palkhor Monastery is the only temple where Tibetan Buddhism Sakyapas, Gelupas and Xilupas coexist in Tibet. Myriad Buddha Stupa, with different chapels overlapped inside, is the best known architecture in Palkhor Monastery.

Gyantse Fortress – past administrative organization and temple.The Gyantse Fortress is in the middle of Gyantse County at an elevation of 4,020m. Used to be built as a palace, it played great importance in resisting invasion of foreign aggressors. Barbettes in Gyantse Dzong are kept there to reveal the history happened in the early 20th century.

Pala Manor – one of the three well-preserved ancient Tibetan noble manors. Located few kilometers away from Gyantse County, Pala Manor has 57 rooms covering an area of 5,357 square meters. The three-story manor is an epitome of feudal Tibetan society, retaining the original luxurious housing of Pala Family and poor living situation of slavery. 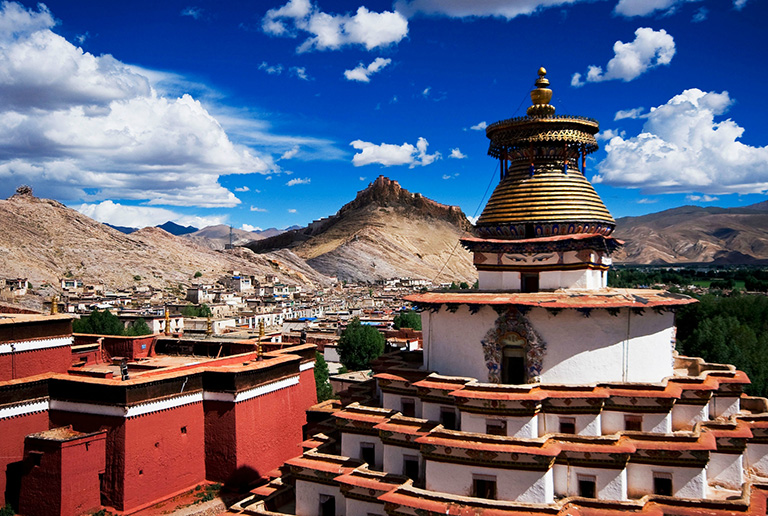 1. Elevation of Gyantse is a few hundred higher than Lhasa. In order to make your Gyantse tour proceed smoothly, you’d better take some precautions against high altitude sickness. Dress warm and keep a good physical condition.

2. Take along your sunblock in Gyantse and other Tibetan destinations. Short sleeves are not suitable for the strong ultraviolet radiation. You should prepare a sunhat, sunglasses, long sleeves clothes, lip balm and sunscreens of high SPF.

3. Do as Romans do. When you are travel in Gyantse or other Tibetan areas, show your respect to local culture and customs. Get permits to take photos, behave well in tour local scenic spots especially in monasteries.

4. Apply for permits and visas needed ahead of schedule. Many tourists pass through Gyantse to Shigatse and Mount Everest, even to cross-border destination - Kathmandu in Nepal. The Tibet Entry Permit is not enough, more permits guide you can check here to get. 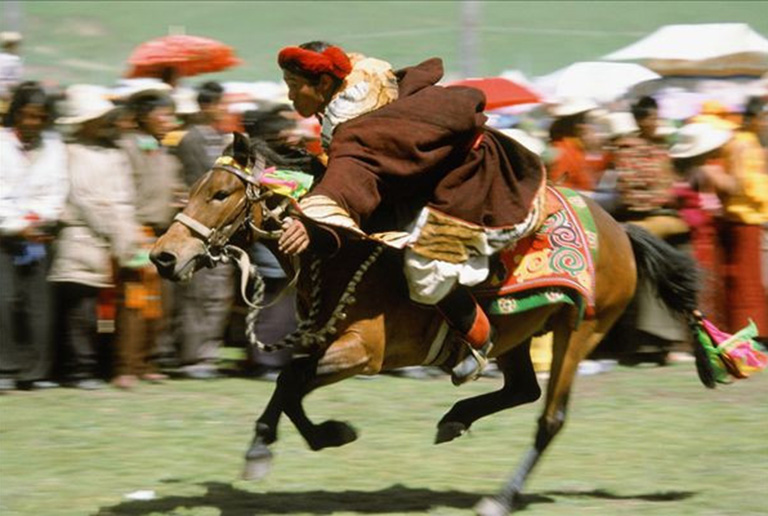 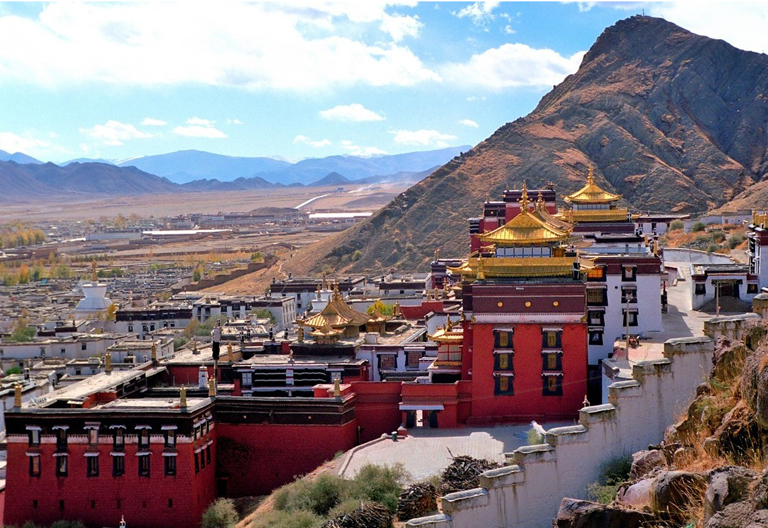 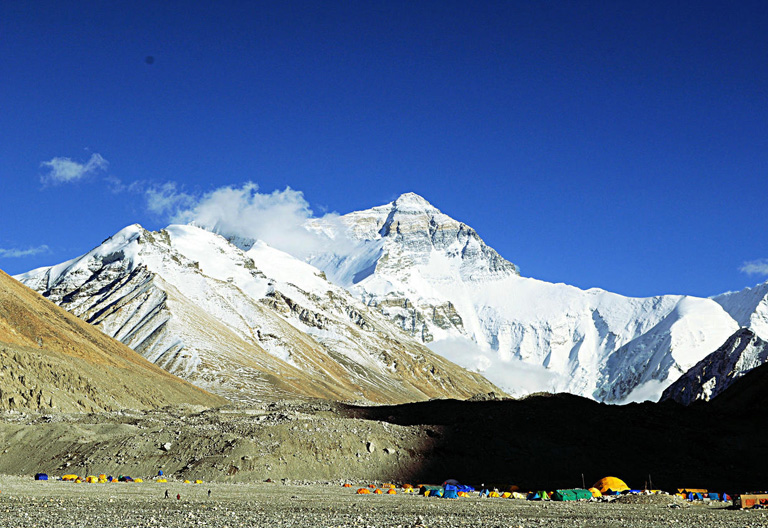 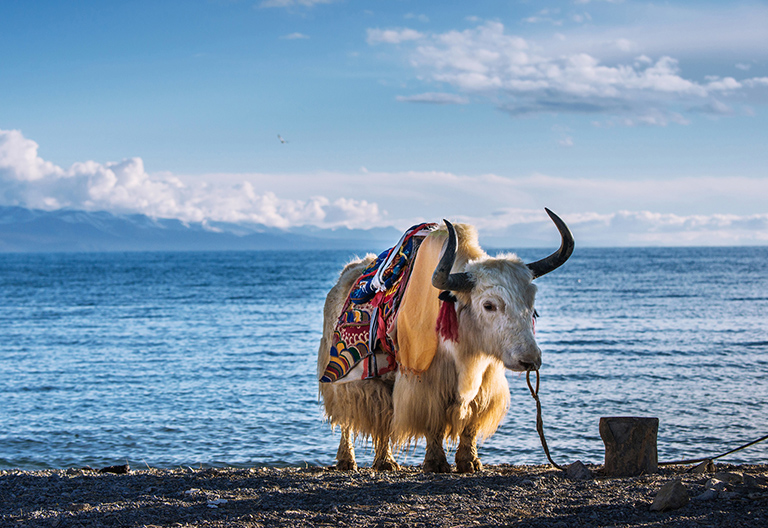 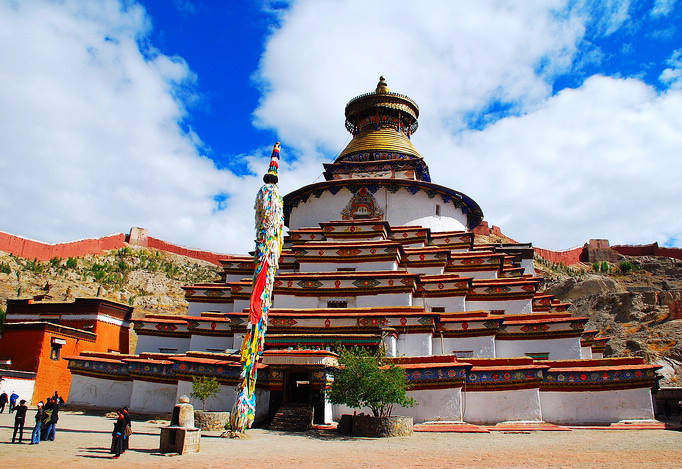 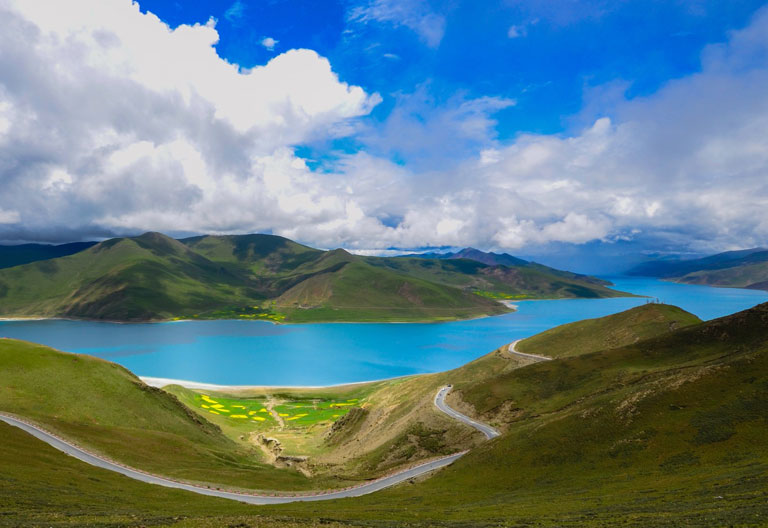 You are here: HomeTibet DestinationsGyantse Best time to visit Gyantse
My wish list