Founded by the descendants of Tobo Dynasty before the 10th century, Guge Kingdom kept a long history for over 700 years. It created a spectacular and advanced civilization, and then disappeared mysteriously. The Site of Guge Kingdom is located in western Ngari Prefecture, about several hours’ driving distance to Mount Kailash and Lake Manasarovar. The architectures of ancient Guge Kingdom were piled up on the mountain slope at a height of 300 meters. On the mountain, there are golden relics of palaces, caves, monasteries and houses, which witness the prosperity and decay of an ancient kingdom. Although hundreds of years have passed, some of the monasteries and halls survived fortunately and become the valuable materials for research on Tibetan history and architectures.

Besides its historical significance, the Site of Guge Kingdom is also a great attraction to enjoy the barren landscape of nature and admire the lost civilization.

Season:
May to October

After the Tubo Dynasty collapsed in the 9th century, the descendants founded Guge Kingdom in western Ngari and settle capital in Rtsa-brang. It developed fast and the reign even covered whole Ngari during the most prosperous period. Located in the relay station of the trade between western and eastern countries, Guge once occupied a decisive position. Due to the event of extermination Buddhism in the late Tubo Dynasty, many Buddhist escaped to Ngari and promoted Buddhism there. As the result, Guge Kingdom regarded Buddhism as the fundamental precepts for governing country. Since 1626, the contradictions between the king and leader of Buddhism aroused and sharpened. In 1633, the Buddhists rebelled and governed Guge Kingdom. In 1679, the Guge Kingdom disappeared after a war. Today, most residence is crushed by years of erosion, the 300 (984ft) meters high wall has the same color of the indigenous Tibetan dirt that one can hardly recognize those valued county yards and warehouses. 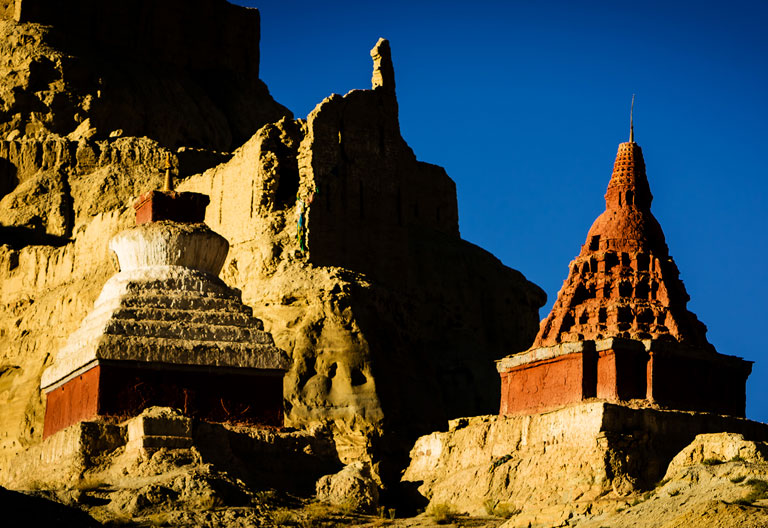 The three levels castle is one unparalleled miracle of construction as well as the symbol of a former peaceful and religious nation. It was built on the top of a mold with civil residence at the bottom of the complex, monasteries in the higher location and palaces on the top. All the architectures were made by the sticky earth from the surrounded soil forest. Therefore, the structures show a unbelievable harmony with the wild environment. Seeing this precipitous hill, you may wonder how the ancient people climb to the top without visible paths on the hill. In fact, they built many blind passes in the mountain and window-like holes for light and watching outside. Even today, the magnificence of Guge Kingdom strikes the beholder’s heart.

Being weather-beaten and war-destroyed for over 1,000 years, Guge Kingdom is unable to take on its original appearance. However, many of those monasteries remain largely unchanged, especially the frescos on the walls, which tells the Buddhist history, myths and legends, as well as the scenes of worshipping, farming, herding, milking, singing and dancing. From these colorful and iridescent frescos, it not hard to peek into the politic, economic, and cultural activities, then feel the prosperity and extinction of Guge Kingdom. There are also exquisite patterns engraved on the overhanging eaves, including lion, elephant, horse and peacock, which are related with four rivers originated from Transhimalaya. Thanks to its far-off location and its quick disappearance, Guge Kingdom draws curiosity and passion of mystery-like people from over the world. 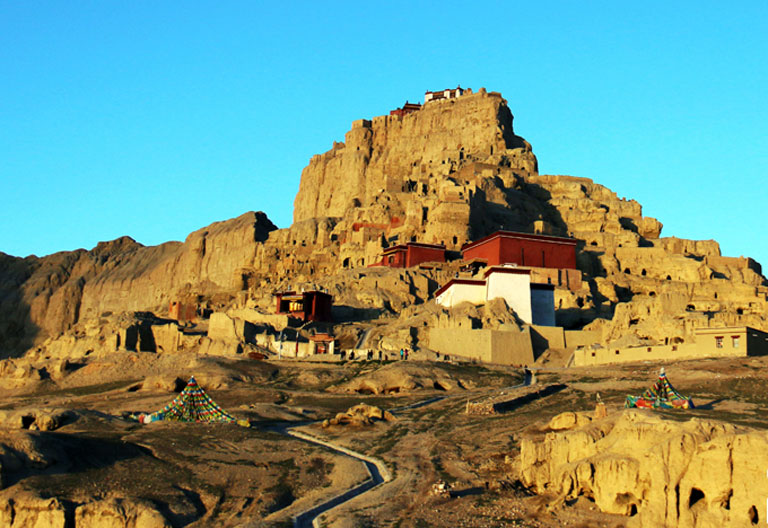 The Clear Construction of Guge Kingdom 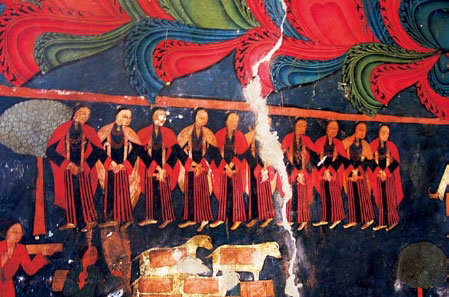 How to Get to Guge Kingdom

Perched in Zanda County, Ngari Prefecture, Guge Kingdom Site is surrounded by a large scale of soil forest. It is about 250km from Shiquanhe Town, the capital of Ngari Prefecture, within 6 hours’ driving. To get to Ngari, both flights and driving are available.

Flight to Ngari: Nowadays, there are flights between Lhasa and Ngari with duration of 2 hours. You can also travel from Urumqi to Ngari by flight with stopover at Kashgar. The whole journey takes about 4 hours. As you land on Ngari Gunsa Airport, you need to drive about 5 hours to get to Guge Kingdom Site.

Driving to Ngari: Most tourists choose to drive to Ngari from Lhasa and have a great sightseeing journey on the way. You will pass through Yamdrok Lake, Karola Glaicer, Gyantse, Shigatse....

Learn more about Get to/around Ngari 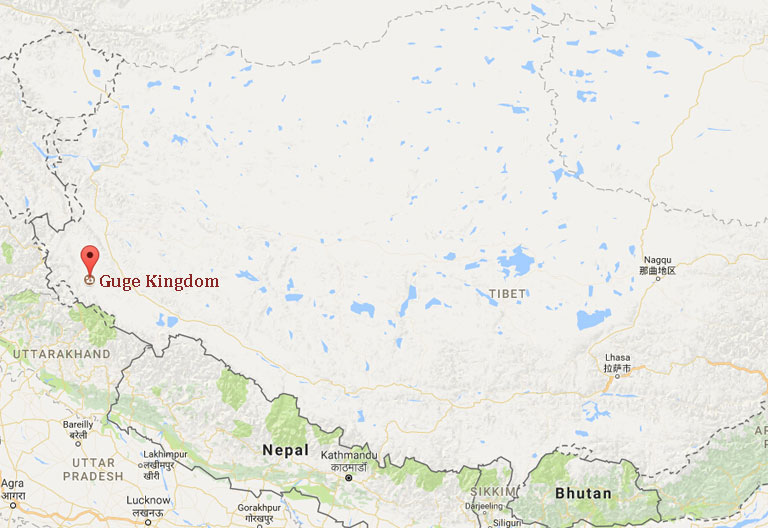 Visit Guge Kingdom, or any other attractions in Ngari, tourists should not only prepare the Tibet Entry Permit, but also apply for Alien Travel Permit, which is issued by local Public Security Bureau (PSB) of Tibet. Besides, Border Pass is also a must and your travel guide will apply it for you. For Indians, the formalities may vary from other nationalities, so if you are Indians, please inform us in advance. Read more about Necessary Permits for Ngari Travel>

At an elevation of about 3,700 meters, Gege Kingdom is relatively low above the sea level. Nevertheless, High Altitude Sickness should be taken into consideration when you visit Tibet. For your first time to Tibet, you are suggested to stay several days in Lhasa and then extend your trip to other destination so that you can have a good acclimatization of high altitude. Remember to drink more water and avoid strong activities on your journey.

As the coldest area in Tibet, Ngari is windy all the year around. There is a huge temperature gap between daytime and night. The best months to visit Ngari include May, June, September and early October. In Guge Kingdom, you can enjoy different views on different time of a single day. At the dusk, you can appreciate a brilliant golden world. Read more about Ngari Weather and Climate>

There are some hotels and restaurants only in the Zanda County. The hotels with limited facilities provide very basic accommodation, and some might be out of power for the evening or night time. Because of the remote location and restricted transportation, the food is not good either. You’d better bring some food and snack with you for supplement.Read more about Ngari Accommodation>

The entrance fee is 200CNY per person and the opening time is 08:00am ~ 19:00pm. Tourists are advised to bring a flashlight to visit the inside monastery because it is very dark in the halls of the ruins.