This 5-day Classic Tour is one of the most popular tours in Nepal. It starts with a bundle of tourist attraction sites in Kathmandu valley and an overnight stop in Nagarkot, an ideal place to watch sunrise over Mt. Everest. Both in Kathmandu & Nagarkot, there are World heritage sites, some as old as 2500 years, fascinating History and Mysterious Culture are all waiting for you. The classic tour to explore Kathmandu, the home to seven World Heritage Sites, with a extension to the nearby Kathmandu valleys, to experience the ancient architecture, leisurely life pace and breathtaking landscape of those hill towns.

Highlights of this tour:

Your tour - at a glance

The Day 1 is your arrival day. There will be no activities arranged but a Welcoming Dinner in the evening. You can take a good rest in your hotel or go for a leisure walking.

You will go to visit the famous Golden Triangle Cities in Kathmandu Valley - Kathmandu, Patan and Bhaktapur. Attractions include including grand Kathmandu Dubar Square, Patan Durbar Square and Bhaktapur Durbar Square, Swayambhunath and Boudhanath. Watcing sunrise over Mt. Everest from Nagarkot is the most exciting highlight.

Today is free for you to leave Kathmandu.

Welcome to Kathmandu, the capital of Nepal, rich in culture and religion. After arriving at Kathmandu Tribhuvan International Airport, you will be greeted by our enthusiastic guide with a very smiling face, then be transferred to check in your hotel in downtown by a air-conditioned private vehicle. The rest of today is your free time to take rest or walk around.

In the evening, you will be treated a "Welcome Dinner" at an excellent traditional Nepalese Restaurant where you will enjoy authentic Nepalese food.

Today’s activities start with a wonderful stroll around the grand Kathmandu Durbar Square, which is the social, religious and urban focal point of the city. With the complex made between the 12th and 18th centuries by the ancient Malla Kings of Nepal, it provides many interesting things to see, like Taleju Temple, Kal Bhairab (God of Destruction), Nautalle Durbar, Coronation Nasal Chowk, the Gaddi Baithak, the statue of King Pratap Malla, the Big Bell, Big Drum and the Jagnnath Temple etc. Then you will visit the Kathmandu’s most ancient and enigmatic holy shrine - Swayambhunath, also known as “Monkey Temple”. It lies 2km west of Kathmandu City. On the clear days, you are able to see a line of Himalayan Ranges. From its hilltop setting, you can get a fine view over Kathmandu of and the valley.

After that, move to next site - Pashupatinath which is one of the world most sacred places of worship for the Hindus delicated to lord Shiva. This temple has a reputation of “the Temple of Living Beings”. Every day you will find hordes of people from all over Nepal and India pilgrimaging to the Pashupatinath Temple in order to give worship to Pashupati. They start off this process early in the morning where they are blessed by Lord Shiva. Each year there is a formal celebration called Shivaratri, which means “night of Lord Shiva”, that is attended by thousands of people.

After the sightseeing, drive back to Kathmandu and stay overnight there.

Optional Activity: you can choose to take a Everest Mountain Flight in the early morning. From the airplane, fantastic Himalayan peaks, lakes and glaciers can be witnessed.

Today, you will firstly go to Patan, 4km from Kathmandu city, once a glorious independent kingdom, but now almost a suburb of Kathmandu city. It is known for the crowding Patan Durbar Square which is honored as the finest collection of temples and palaces with exquisite carvings in the whole of Nepal. It also attracts tourists with the treasures and souvenirs in the various shops around the square. The square consists of three main chowks, or courtyards - the central Mul Chowk, Sundari Chowk and Main Keshab Narayan Chowk.

After visiting Patan Durbar Square, you’ll be transferred to Nagarkot. Situated 34 km north-east of Kathmandu, Nagarkot is one of the most beautiful sites in Nepal. With an altitude of 2,715 meters, this is an ideal place to enjoy the grandiose views of Mount Everest and some other high peaks over 7500m on the Himalaya Range.

Get up early in the morning to catch the precious moment to watch the breathtaking sunrise over Mt. Everest from Nagarkot, then get back to your hotel to have breakfast.

After having the fantastic time in Nagarkot, you’ll be transferred to another sister city of Kathmandu and Patan - Bhaktapur which is one of three medieval city-states in the Kathmandu Valley as well as the best preserved one with an altitude of 1,401 meter. With three different styles square - Durbar Square, Taumadhi Square and Dattatreya Square, it is the best place to explore traditional Nepalese architecture and local life and custom, also the best place to witness the great achievements of arts and crafts created by the famous Nepal's Malla Dynasty (1201–1769). Bhaktapur is also famous as the Town of the Devotees. There are many devout Hindus and Buddhists living in the city.

In the afternoon, go to have a contrast tour to the giant Buddhist stupa - Boudhanath. About 131ft (40km) high, Boudhanath is the largest stupa in Kathmandu Valley , and one of the largest and most important Buddhist stupas in the world. The all-seeing red, white and blue eyes of Buddha are painted on all four sides of the stupa, similar to Swayambhunath, and surrounded by hundreds of fluttering prayer flags, prayer wheels and small images of Buddha.

After the sightseeing, drive back to Kathmandu City for accommodation.

Your journey in Nepal comes to an end today! After breakfast, your guide will pick you up from the hotel to the airport in time for the scheduled flight to your next destination. Before that, you can take a rest at the hotel or go for a walk nearby.

Tips: Please pack your luggage carefully, especially for small things like camera charge, power adaptor, mobile phone, phone charger, wallet and towel. If your flight is arranged in the afternoon, please make sure you check out the hotel before 12pm.

The quotation for this trip is $489 per person

1. This price is based on a group of 2 adult travelers who will take our private tour and share one standard rooms in regular local 4-star hotel in lower seasons.

2. This price is subject to change according your traveling season, group size, hotel class, change of activities in your itinerary and possible fluctuation of currency exchange rate. If you want a lower price, you can get more people to join you, or use economy class hotels.

4. Reference exchange rate of USD 1= RMB 6.95. The final quotation will be adjusted accoring to the latest real-time exchange rate.

A great way to enjoy the lowest possible price is to invite more people to join your trip to share the travel experience as well as the tour expense. The more people in a group, the lower the price per person. (We recommend you join our group tour if you are traveling alone. Please contact our travel consultant for more information)

Reviews of Our Customers

Still not know us well? Read what other travelers are sharing about their Tibet trip with Tibet Discovery (We only accept reviews from confirmed travelers who took our tours / activities, so you can surely rely on the reviews)

I want to thank you for your truly exceptional customer service. You have been very helpful through this entire process.

If we should be able to reschedule a visit to China in the future, I will certainly use your services, and I would happily refer my friends and associates.

Thank you for your lovely mail.

This epidemic was badly managed by some countries, they thought just like SARs only Asian were affected.

However due to their complacency whole world faces lock down.

Good news is in China the epidemic is under control.

However due to continue epidemic tourism business are badly affected for indefinite period. I am aware personally you are affected.

How do you manage your situation.

We over here experience drop in business but not as bad as during SARs. We manage somehow through experiences to overcome this epidemic through reducing expenditure prudently. Lets us all pray for Divine intervention for mankind to globally overcome this terrible situation soon. Many thanks for your mail.

Thank you for the extra touch and update on the current situation in China. Very proud to watch how China combat the virus so expediently! China is indeed a good role model for the other countries to observe and follow.

Let's continue being vigilant and not be complacent about the situation.

Bless you and your family.

We look forward to our trip next March.

Free Quote for the Trip

Tibet has too much to offer and our aim is to bring you the best experience in Tibet. Following are some other recommended Tibet tour packages that you may be interested in. All of our Tibet tour packages are customizable to meet your personal requirements. You can also contact us to customize a trip if you want. 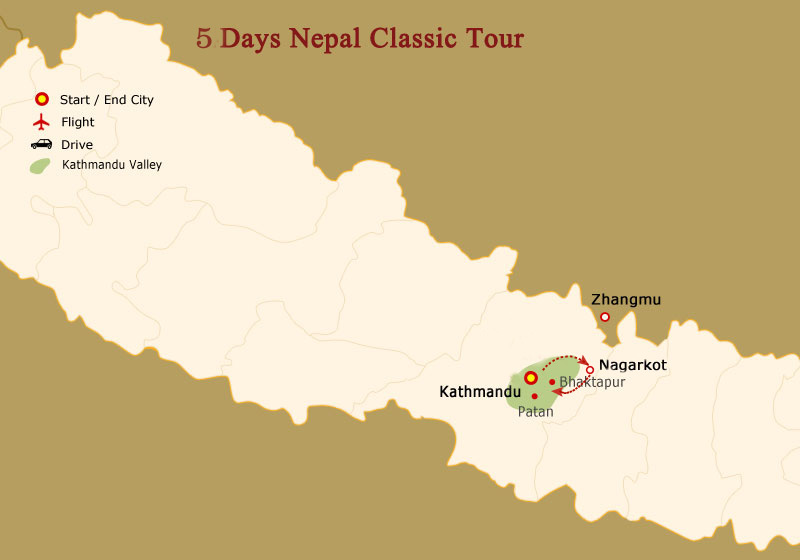 My Wishlist (0) Customize a Tour
You are here: HomeNepal Tours5Days Nepal Classic Tour

You are inquiring about the "5 Days Nepal Classic Tour (Kathmandu - Nagarkot)".