This is one of the most popular tours in Nepal. It covers two most popular places in Nepal - Kathmandu and Chitwan. During this trip, you will first visit the capital city Kathmandu where you will definitely be amazed by the grand Durbar Square, holy Buddhism and Hinduism monasteries, ornate royal palaces, etc. Then transfer to the heaven of wild lives, jungle activities - Chitwan National Park where you can see the rare species - one-horned rhinoceros, Bengal tiger, wild elephant, etc. At the same time, many leisure jungle activities are at your choices, such as elephant ride, rafting, walking, etc.

Highlights of this tour:

Your tour - at a glance

The Day 1 is your arrival day. There will be no activities arranged but a Welcoming Dinner in the evening. Day 2 is for you to visit the famous sites in Kathmandu city, including grand Kathmandu Dubar Square, Swayambhunath and Boudhanath.

Drive back to Kathmandu to visit Kathmandu's sisiter city - Patan.

Today is free for you to leave Kathmandu.

Welcome to Kathmandu, the capital of Nepal, rich in culture and religion. After arriving at Kathmandu Tribhuvan International Airport, you will be greeted by our enthusiastic guide with a very smiling face, then be transferred to check in your hotel in downtown by a air-conditioned private vehicle. The rest of today is your free time to take rest or walk around.

In the evening, you will be treated a "Welcome Dinner" at an excellent traditional Nepalese Restaurant where you will enjoy authentic Nepalese food.

Today’s activities start with a wonderful stroll around the grand Kathmandu Durbar Square, which is the social, religious and urban focal point of the city. With the complex made between the 12th and 18th centuries by the ancient Malla Kings of Nepal, it provides many interesting things to see, like Taleju Temple, Kal Bhairab (God of Destruction), Nautalle Durbar, Coronation Nasal Chowk, the Gaddi Baithak, the statue of King Pratap Malla, the Big Bell, Big Drum and the Jagnnath Temple etc. Then you will visit the Kathmandu’s most ancient and enigmatic holy shrine - Swayambhunath, also known as “Monkey Temple”. It lies 2km west of Kathmandu City. On the clear days, you are able to see a line of Himalayan Ranges. From its hilltop setting, you can get a fine view over Kathmandu of and the valley.

After that, move to see the giant Buddhist stupa - Boudhanath, the largest stupa in Kathmandu Valley at about 131ft (40km) high and one of the largest and most important Buddhist stupas in the world. The all-seeing red, white and blue eyes of Buddha are painted on all four sides of the stupa, similar to Swayambhunath, and surrounded by hundreds of fluttering prayer flags, prayer wheels and small images of Buddha.

After the sightseeing, drive back to Kathmandu and stay overnight there.

Optional Activity: you can choose to take a Everest Mountain Flight in the early morning. From the airplane, fantastic Himalayan peaks, lakes and glaciers can be witnessed.

After having breakfast, you will be driven towards Chitwan,which is 150 kilometers from Kathmandu and a 5 hour's drive into the mountains.

All the way you'll descend down along the winding road on the banks of the Trishuli River. Chitwan has a particularly rich flora and fauna. Nepal’s 1st national park, the Chitwan National Park together with the adjacent Parsa Wildlife Reserve supports spices diversity much higher than any other on the Indian subcontinent. Rare species include Bengal Tiger, Gharial and the world’s second largest population of Asian Rhinoceros, but also Leopards, Mugger Crocodile, Indian rock python and several species of deer.

After checking into the hotel and getting refreshed you will be briefed about full nature programs by nature guide. Then you'll head on for activities. There will be a guided village walk and a walk on the banks of the Rapti River to watch the charming sunset views in the sub-tropical jungle.

In the evening, dinner with cultural program by ethnic tribal people with their stick dance and tribal drums, popularly known as Tharu Cultural Program.

Today after breakfast, you’ll have a full day at Chitwan National Park, which has been declared by the UNESCO as a World Heritage Site.

You will discover why the National Park holds an important place in preserving the wild lives that are rapidly getting extinct from this planet. You're almost sure to spot water buffalo, egrets, woodpecker, and deer in their natural habitat. The Park is also home to rhinoceros, tigers, leopards, sloth bears, wild bison, 500 birds, butterflies, as well as the near extinct Gharials crocodiles.

You can do a number of activities here - an elephant safari, a nature walk, bird watching, a jungle drive or a canoe trip. You may even take a bath with an elephant and learn how to wash your elephant! Don't forget take a video of your elephant-bath which will be one of the fondest memories of the lifetime.

After breakfast, drive back to Kathmandu.

Your journey in Nepal comes to an end today! After breakfast, your guide will pick you up from the hotel to the airport in time for the scheduled flight to your next destination. Before that, you can take a rest at the hotel or go for a walk nearby.

Tips: Please pack your luggage carefully, especially for small things like camera charge, power adaptor, mobile phone, phone charger, wallet and towel. If your flight is arranged in the afternoon, please make sure you check out the hotel before 12pm.

The quotation for this trip is per person

1. This price is based on a group of 2 adult travelers who will take our private tour and share one standard rooms in regular local 4-star hotel in lower seasons.

2. This price is subject to change according your traveling season, group size, hotel class, change of activities in your itinerary and possible fluctuation of currency exchange rate. If you want a lower price, you can get more people to join you, or use economy class hotels.

4. Reference exchange rate of USD 1= RMB 6.9. The final quotation will be adjusted accoring to the latest real-time exchange rate.

A great way to enjoy the lowest possible price is to invite more people to join your trip to share the travel experience as well as the tour expense. The more people in a group, the lower the price per person. (We recommend you join our group tour if you are traveling alone. Please contact our travel consultant for more information)

Reviews of Our Customers

Still not know us well? Read what other travelers are sharing about their Tibet trip with Tibet Discovery (We only accept reviews from confirmed travelers who took our tours / activities, so you can surely rely on the reviews)

Replies to your questions below. You are welcome to use the attached photos on your website if you wish.

Communication from my travel consultant was excellent. Wendy, you were very helpful in setting out options for the tour, answering my questions and helping me make the right choices. She always responded promptly and with clear, concise information.

I was very happy with the tour. The guides and driver were great. My girlfriend and I both had a good time. We saw a lot of unforgettable sights in 6 days but we also had opportunity to rest and to do our own thing.

I only hope that Tibet can become easier to visit in the future while at the same time being protected from overdevelopment so it retains its unique charm and heritage. I think managed tourism is good for the local economy for everyone’s benefit. 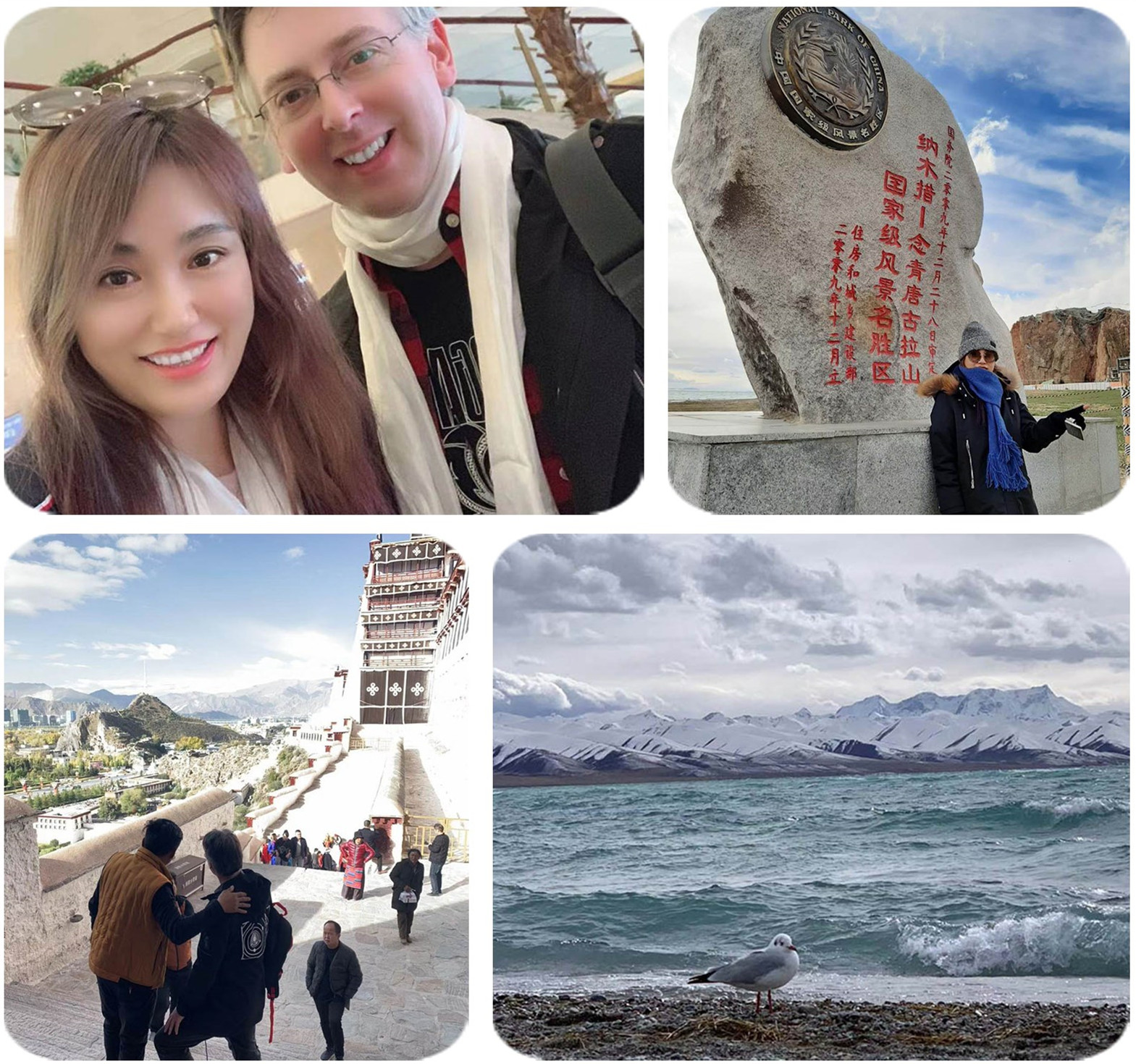 Thanks for your email requesting some feedback about our recent trip to Tibet.

We really did have a great time and made some wonderful memories.

We found the whole experience of arranging the holiday with you via email very easy and enjoyable.  We always received prompt and clear responses to all our queries that supported us with decisions about the holiday itenary and arrangements and through the visa and permit process.  The train journey booking went very smoothly. Thank you for this.

The tour in Tibet was excellent. We were very happy with the range of places we visited and the standard of the hotel.

Our guide Tenzing and our driver Mr Chao were both really friendly,helpful and reliable. Tenzing's English was excellent and his knowledge extensive.  He was very patient and happy to ask our many questions!

Thank you again - We would definitely recommend booking a holiday to Tibet with you to any of our friends.

As my travel consultant, you answered my questions fast and patient enough. Satisfied with the tour you arranged for me. Good choice of activities on the limited time we had overall. Local guides and drivers were excellent, and we felt very safe and looked after at every stage, including pick-ups and drop offs. Hotel choices excellent.

Free Quote for the Trip

Tibet has too much to offer and our aim is to bring you the best experience in Tibet. Following are some other recommended Tibet tour packages that you may be interested in. All of our Tibet tour packages are customizable to meet your personal requirements. You can also contact us to customize a trip if you want. 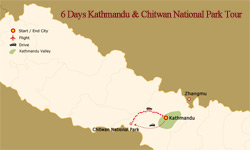 You are inquiring about the "6 Days Kathmandu & Chitwan National Park Tour".

Price from per person