Located at Thimphu Valley with an average elevation of 2,500m (8,202 ft), Thimphu in Western Bhutan is the largest and the capital city of Bhutan after replacing the ancient capital - Punakha. The 3rd King of Bhutan led a reformation and moved the capital from Punakha to Thimphu in 1955. Population here is less than 100,000. It is more like a small countryside town without tall buildings and traffic lights but only one policeman directing flows. Probably you think it’s less prosperous and huge than other capital cities, but numerous tourists from worldwide are attracted to Thimphu to explore its authentic history and culture in the reclusive Bhutan.

Normally Thimphu is arranged as the second tourist destination after Paro, because Paro has the only international airport in Bhutan and the world-famous monastery Tiger’s Nest and some landmark spots. As the most modern city in Bhutan, Thimphu is the best place to experience Bhutan's local culture mixed with modern atmosphere. You can stroll inside sacred monasteries, witness breathtaking natural landscapes and learn about different Bhutan’s traditional art and heritage, taste local food, see special Bhutanese style costumes etc. Discover Thimphu to get the essence of Bhutan! 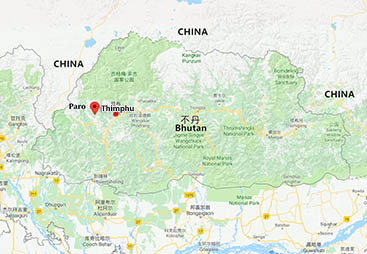 Top Places to Visit in Thimphu

Searching for mystery of happiness? You’ve got the right place. Thimphu will always present you the best beyond your expectation, including beautiful natural scenery, peaceful Buddhist temples, interesting folk customs, special dresses and much more. Surely, you can’t miss the great Himalayan views and sacred National Memorial Chorten. Exploration of local Bhutanese flavors and daily life in Weekend Market is pleasant surprises in the short trip. Read more about >>places to visit in Thimphu.

Praised as “A Happy Kingdom Kissed by Buddha” and “the Land of Thunder Dragon”, Bhutan is endowed with magnificent Buddhist culture. Meanwhile, isolation from chaos, perfect harmony with nature, positive value of development, traditional way of living, all those cultivate an abundant local culture and happiness of Bhutanese. To help you catch a glimpse of the long history and colorful culture of Bhutan, we select three top local activities and festivals below in Thimphu for your trip, and you can read more about >>things to do in Thimphu.

Following are some other recommended Thimphu tour packages that you may be interested in. All of our Tibet tour packages are customizable to meet your personal requirements. You can also contact us to customize a trip if you want.