Punakha Dzong - The Most Beautiful Dzong of Bhutan

The Punakha Dzong standing by riverside is more than the landmark and administrative center of Punakha, but also the winter residence of the Central Monastic Body and one of the top favorite attractions in Bhutan. Well-known as the second oldest and largest Dzong of Bhutan with more than 300 years’ history, Punakha Dzong was initially built by Ngawang Namgyal, 1st Zhabdrung Rinpoche in 1637. This historical and sacred site is engraved by Bhutanese as one of the most important Dzongs of Bhutan, where many major events of royal clans took place, including the coronation of the 1st king and wedding of the 5th king of Bhutan (the current king).

Seen from afar, the witness of Bhutan’s history is a beautiful Tibetan-style architecture complex of white walls, red woodcarving decorations and gilded roofs. The most gorgeous season of Punakha Dzong belongs to the purple jacaranda blossoms in spring, the most extremely visually stunning sight. The rectangular shape fortress is also an honorable treasury where preserves numerous Buddhist relics and historical legacies, an excellent witness of Bhutan’s history and culture.

How to Get to Punakha Dzong

Punakha Dzong is located at the confluence of Mochhu River and Pochhu River in Punakha Valley with an elevation of 1,463m. Currently, tourists who plan to visit Punakha Dzong have to transfer in Paro, for Paro is the location of the only international airport in Bhutan and there is no airport serving Punakha.

With certain international airlines with Nepal, India, Thailand, Singapore, Bangladesh, Paro is the gateway and first destination for Bhutan travel. It takes about 3 hours to drive northeastward to get to Punakha Dzong from Paro Airport, passing through Thimphu on the 110kms’ ride. >> Read more about flight to Bhutan

Tourists can travel to Punakha Dzong from Thimphu by taking car, which only takes about 2 hours for 70km. After a 40 minutes’ uphill drive form Thimphu, you will glut your eyes with the breathtaking Himalayan view on Dochula Pass and superb natural landscape and Bhutanese traditional style houses along the route. >> Read more about Thimphu 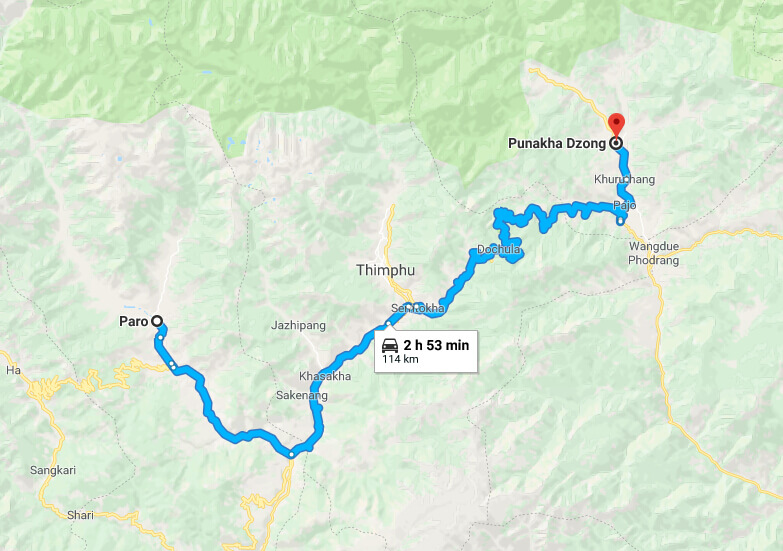 Punakha Dzong is an excellent piece of architectural beauty and the rare Dzongs of Bhutan owning three docheys (means courtyards), others usually has two only. As the second largest Dzong of Bhutan, it is 180m long and 72m wide with lots of artistic buildings in separate functional areas.

The visit of Punakha Dzong starts from a red wooden cantilever bridge on Mochhu River, an ingenious aisle linking the Dzong to the main road. At the main entrance, there is a specialized 7 meters high wooden ladder standing cliffy into the interior. There are few golden pray wheels and fascinating Buddhist murals about the 12 Chinese zodiac at the doorway.

The First Dochey in the North - Administrative Seat

The administrative offices are located in this first courtyard with a giant six-storey tower building and a Bodhi tree in the center. This Utse stupa of whitewashed walls received its golden dome from the 4th king of Bhutan, Gyalse Tenzin Rabgye. There are different shrines and exquisite woodcarving-decorated windows at each layer. Obviously, the windows present a figure of wide at the top and narrow at the bottom as the walls show an opposite form.

The most precious national treasure of Bhutan - the Self-created Kasapani (Rangjung Kharsapani) is consecrated in the Tse Lhakhang Temple in the Utse stupa. It is an Avalokitesvara statue the first Zhabdrung Rinpoche brought from Tibet, which will be exhibited for pilgrimage in the Punakha Tshechu Festival only, and not open to the public. At the left corner, there is a shrine worshiping the Tsochen, the wife of Indian Cobra Naga, a statue of Naga beside and many stones. Once get enter the dochey, tourists often get shocked by the majestic stupa and atistic carvings, can’t help seizing every twinkle moment here.

Fenced off from the first courtyard by the central Utse stupa, the second part is the living quarter of the monks. You can see many monks in red robes chanting at the lectern and doing daily routine around. There are two main halls inside this dochey, one of them is the Phodrang Palace where the first King of Bhutan got his coronation as Order of Knight Commander from British Commissioner John Claude.

The Third Dochey in the South - Sublime Religious Zone

This most secret zone of Punakha Dzong is the private meeting hall for prominent monks and the location where reserves the remains of the Terton Pema Lingpa and Shabdrung Ngawang Namgyal. The bottom is a huge Hundred Pillars Hall where towering 54 majestic gilded columns with various subtle carvings. Walk through the wooden floor, right ahead you will find three holy giant statues of Sakyamuni , Guru Rinpoche and Shabdrung Ngawang Namgyal. Once step in, look the colorful decorations and distinctive craftworks on windows, door and pillars, the splendid frescoes telling the lifetime stories of Sakyamuni, all visitors will be impressed by the bold creation and unique charm of Buddhist culture.

The first Zhabdrung Rinpoche, great founder of Bhutan died in Punakha Dzong in 1651 and his remains was embalmed preserved in a sealed coffin of gilded stupa in Machey Lhakhang, the southernmost courtyard. Only the kings and Je Khenpo (supreme leader of monastic group) can visit for blessing before getting crown. In addition, a mass of valued relics and Buddhist collections are saved in this shrine.

This kind of figures or sculptures is very common in Bhutan’s Dzongs, restaurants, cafes or local families. You may wonder why a elephant, monkey, rabbit and bird propping each other up, there is a profound moral attached. On the surface, the lumbering elephant wouldn’t get the fruit without monkey’s help, despite its great bulk. If the bird didn’t eat the fruit and excreted seeds into ground, the tree won’t exist. And the tree will bear no fruit if the rabbit didn’t protect the root underground. According to the Bhutanese legends, the four animals are close friends on behalf of earth, air, underground and sky of nature, a prefect corporation and dependence upon each other. It is an excellent example of the value and belief the whole nation delivers - great harmony with nature. 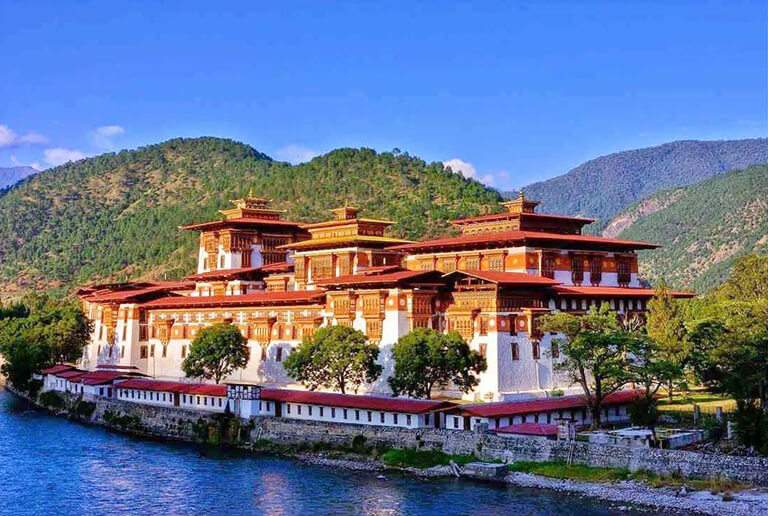 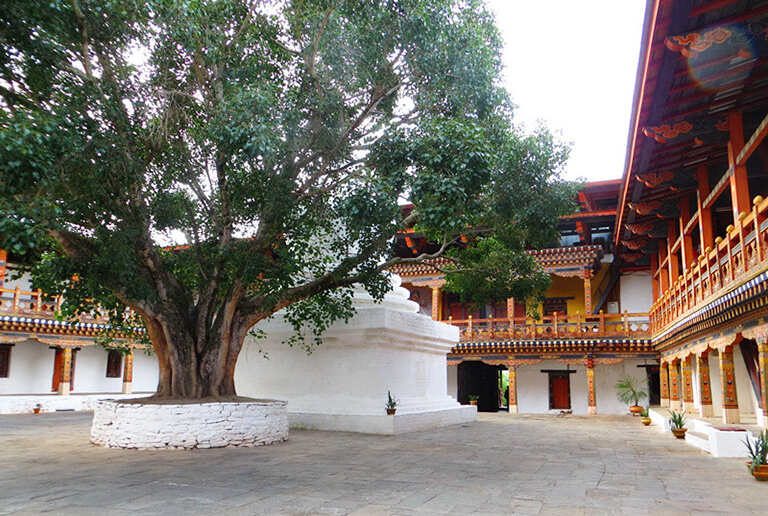 Bohdi Tree in the Nothern Dochey 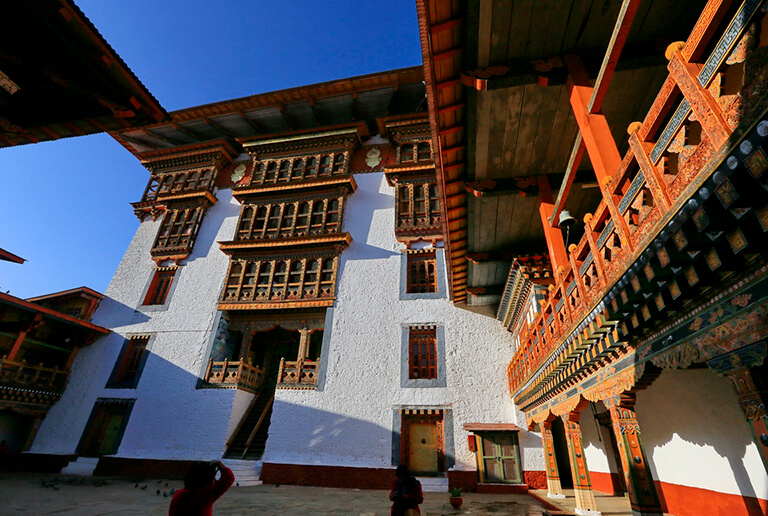 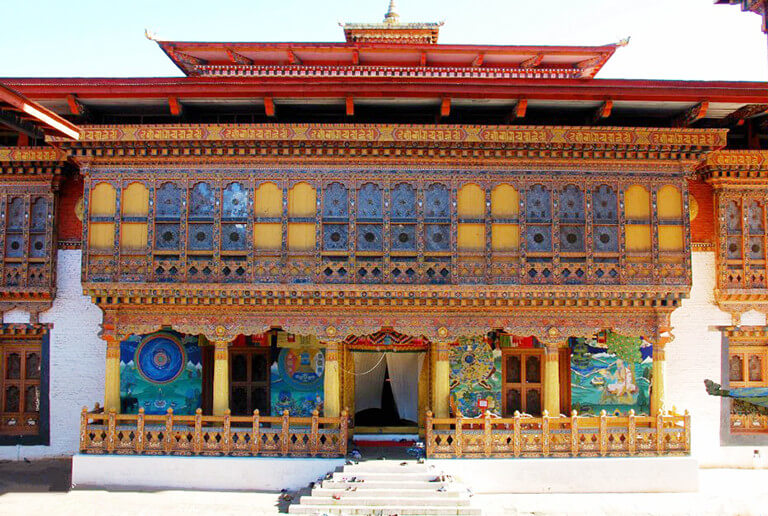 The Exterior of the 3rd Courtyard 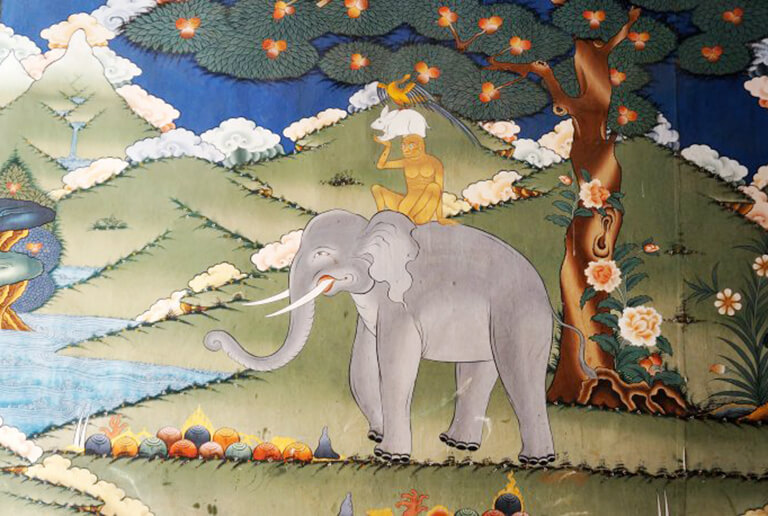 In the early 1326, there already stood a small monastery with Buddha statue, which is named as Dzong Chug. A popular Bhutanese legend says the Guru Padmasambhava (Guru Rinpoche) once prophesied the construction and location of Punakha Dzong. In 1637, the 1st Zhabdrung Rinpoche, Shabdrung Ngawang Namgyal, the unifier of Bhutan indeed started to construct a Dzong as Guru Padmasambhava predicted. Just one year, Pungthang Dechen Phodrang - the embryonic original Punakha Dzong was completed. Then the Punakha Dzong began its history of political center until 1955. More buildings were added around later, including the Buddhist temple erected to memorize the defeat of Tibetan invasion in 1639 and brassy rooftop gifted from the 7th Dalai Lama.

However, tracing back the history, the Punakha Dzong suffered from lots of attacks and natural catastrophes, like fires, earthquakes and flood. That’s why the Dzong went through frequent reparation as a newly built one and set up a steep wooden ladder at the entrance lifting against aggression. 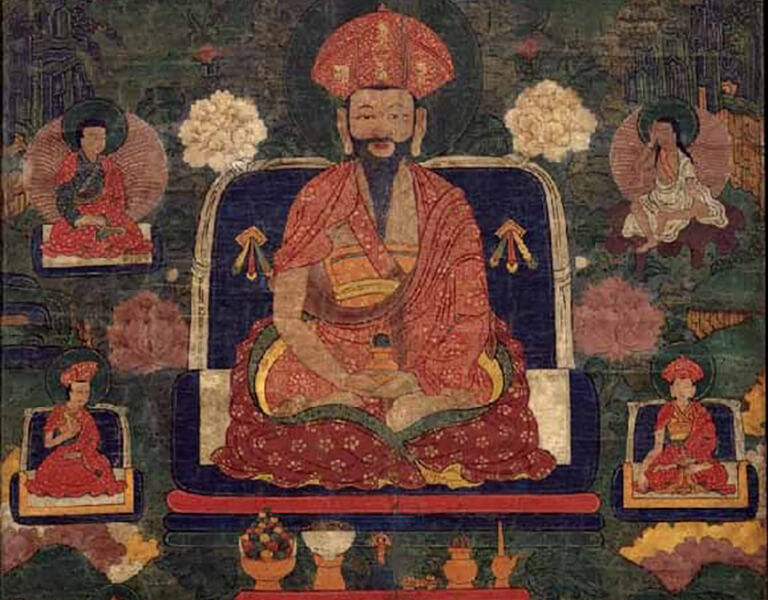 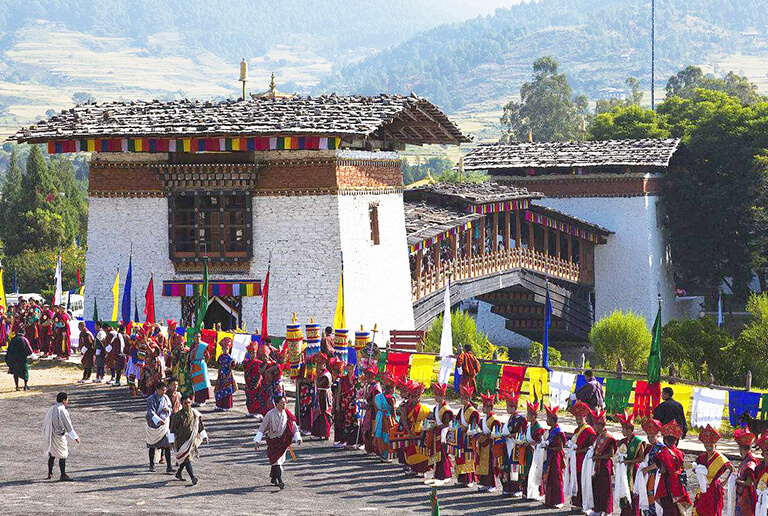 Punakha Dzong Hosted the Wedding of the 5th King of Bhutan

What is a Dzong - Facts about Dzongs of Bhutan

In Bhutan, you can see various kinds of Dzongs located in every valley. Those delicate architectures are the featured outcome of Bhutan’s long history and unique culture. Broadly speaking, Dzong is an administrative district in Bhutan. In a narrow sense, it is an equally shared administrative center and monastery.

To protect Bhutan from Tibetan invasions in the early 17th century, the first Zhabdrung Rinpoche , Shabdrung Ngawang Namgyal started to build many fortresses in strategic location, which afterwards served as the Dzongs of Bhutan. Because the whole country of Bhutan respects and worships Tibetan Buddhism as the national religion, and the Shabdrung Ngawang Namgyal initiated the dual system of government (religious and administrative), the Dzongs turns to be the location for both the seat of the government and sacred temple for religious affairs. Meanwhile, the Dzong is also the site where hold the grand Tshechu festival in every valley.

Shabdrung Ngawang Namgyal built the first Dzong - Simtokha Dzong in southern Thimphu in 1629, from where he could control traffic over the vital Paro valley to the west and Trongsa Valley to the east. After landing in Paro, travelers can visit the large Rinpung Dzong (also called Paro Dzong), tour the current seat of the government and summer palace for Central Monastic Body at Tashichho Dzong in Thimphu and explore more gorgeous Dzongs in other regions of Bhutan. 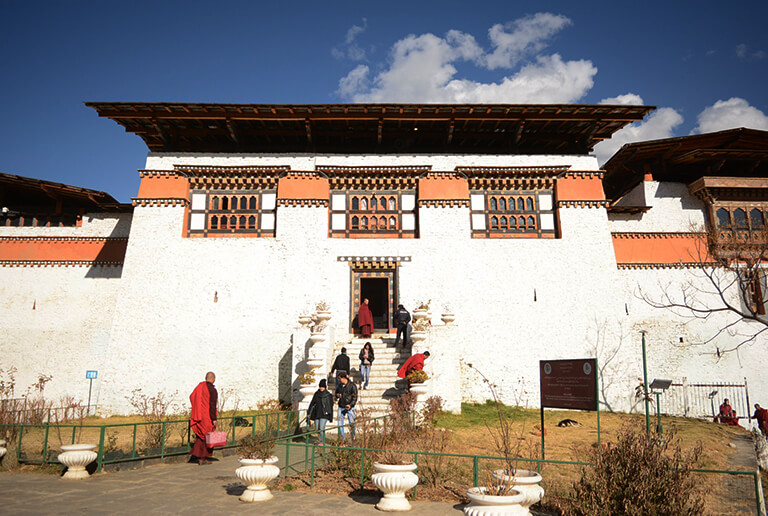 For the lower elevation at Punakha Valley and the surrounding lush vegetation, Punakha Dzong (alt: 1,200m) enjoys a moderate climate all year around, even the winter days are relatively warm than other places. Tourists can visit Punakha Dzong at any time of year. Considering the comfort and convenience of travel, the best time to visit Punakha Dzong is from February to April and October to December, when the weather and climate is quite balmy and pleasant. It is getting warmer since February and the famous Punakha Tshechu will be held during the end of February and beginning of March. Autumn gives the more clear days to view the Himalayas. It’s not recommended to tour Punakha in summer and late winter for it’s either too humid and hot in summer rainy season or chilly at the end of winter.

Ticket： 300 rupees is charged per person for visiting Punakha Dzong
Opening Hours: 8:30am ~ 17:00 (Summer: June, July and August)
11:00am~17:00pm (Winter: November, December, January)
The Dzong will close between 13:00pm~15:00pm during lunch time.
Tourists are only allowed to visit the first and second courtyard in the Punakha Dzong.
Beware of the steep steps at the entrance.

Manners Maketh Man. When in Rome, do as Romans do.
Dress Code: Bhutan is a religious country full of monasteries, Dzongs (fortresses) and sacred religious sites, therefore, long pants and long sleeved tops should be worn to show respect while visiting those places. You can dress in layers, easy to put on and off. Do not dress slinky or short pants. Also no kerchief, scarf or hat, but you can hold in your hand. No photographing is permitted in the Third Courtyard, and visitor should take off shoes before entering.

4. Toilet in the Punakha Dzong

There is one toilet available inside the Punakha Dzong, you can ask your tour guide about the exact location, and you need to pay for using it. 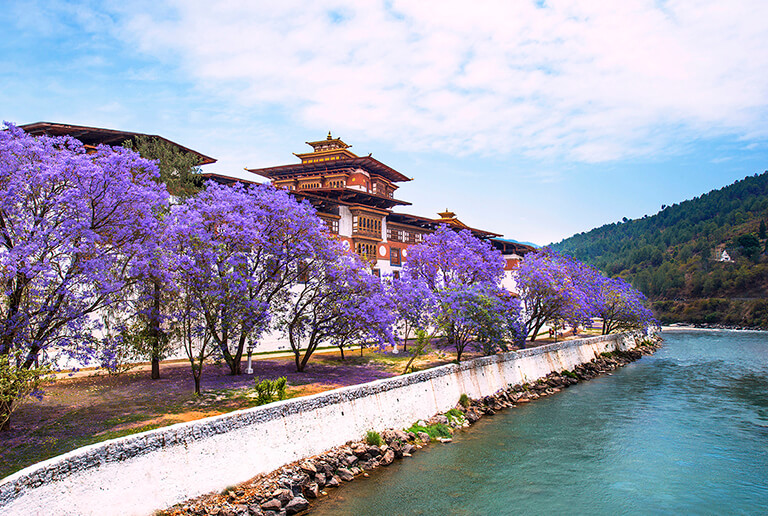 Beautiful Punakha Dzong in May 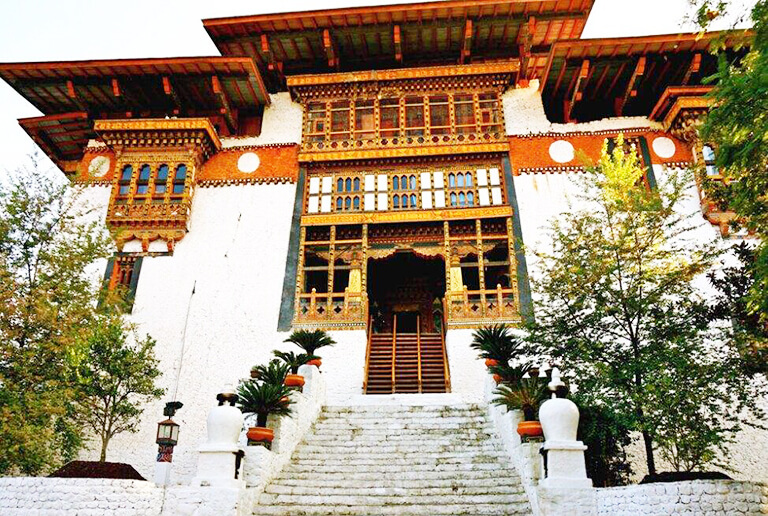 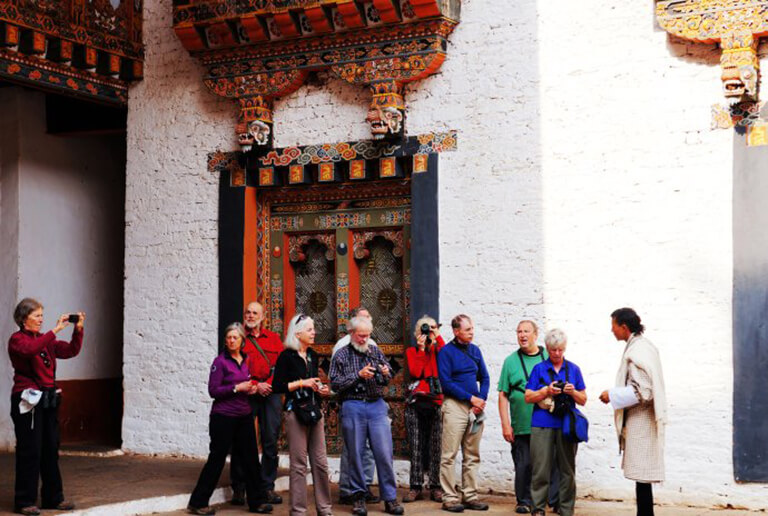