Punakha is a well-known district in Western Bhutan for the most beautiful and second oldest Punakha Dzong. It was the capital of Bhutan for over 300 years before the government moved it to Thimphu in 1955, where is about 70 km away for 2.5 hours’ driving. Located at an average elevation of 1,200 m along the Mochhu River and Puchhu River (two of the most important rivers in Bhutan), Punakha enjoys a moderate weather and climate, which is suitable for living and rice farming. Therefore, the former seat of government - Punakha Dzong serves as the winter residency for the Central Monastic Body. With a short distance from capital Thimphu, Punakha proves itself a must-visit destination with brilliant cultural legacy, historical legend and appealing countryside landscape.

Ancient Capital Plus the Most Beautiful Dzong

The earliest history of capital role of Punakha dated back to 1637. Later in 1907, the first king of Bhutan got his coronation ceremony in Punakha and remained it as the capital city, and thence Punakha opened a modern chapter in the history of Bhutan. In 1953, the first national assembly was hold here by the 3rd King of Bhutan who also implemented the first five-year plan, and promoted GNH (Gross National Happiness) and many significant reforms. As the best testimony of Bhutan’s major development, the current 5th king of Bhutan hosted his grand wedding in the beautiful Punakha Dzong in 2011. This beautiful landmark - Punakha Dzong is the best and most beautiful site to explore the brilliant cultural legacy and historical relic of Punakha, because it witnessed the tough past as the seat of government. 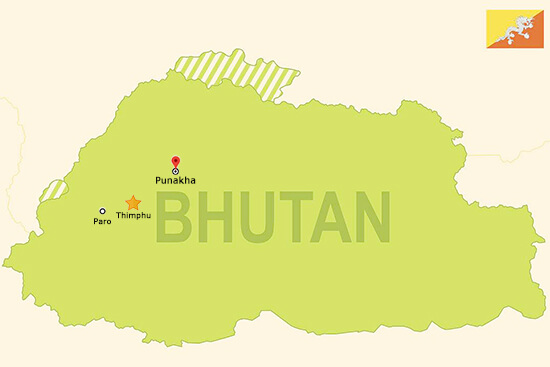 Top Places to Visit in Punakha

History moves on, plenty of heritages were left. As the previous capital of Bhutan, Punakha preserves many historical treasures and religious relics, as well as modern adventures. In Punakha, you can soak up the atmosphere of rich history and amazing culture, enjoy stunning natural views, experience an adventure trip etc. Time gets slower and more diverting if you pay a visit to the picturesqure Punakha Dzong, Chimi Lhakhang Temple and Khamsum Yulley Namgyal Chorten, feast your eyes at Dochula Pass with Himalayan views and refreshing rustic fields, and record an unusual trip on a river raft with your family.

Following are some other recommended Punakha tour packages that you may be interested in. All of our Tibet tour packages are customizable to meet your personal requirements. You can also contact us to customize a trip if you want.