Rinpung Dzong, also known as Paro Dzong, is a traditional Bhutan architecture in style with a complex of courtyards, temples, offices and accommodating area surrounded by towering walls. The dzong’s full name - Rinche Pung Dzong is literally translated as Fortress on a Heap of Jewels. It gets such a name because of its large collection of treasured buildings. All the buildings are equipped with huge windows with elaborate wooden carvings of Bhutan traditional motifs. As the finest example of Bhutanese architecture, Rinpung Dzong is always listed in the top attractions in Bhutan. No matter you are in which corner of Paro Valley, you can see Rinpung Dzong easily.

During 17th and 18th century, Paro Dzong was an important bastion for the Kingdom of Bhutan against invasion from the north. At present, it houses the Monastic Body and government offices, and serves as the religious, military, administrative, and social centers of their district. Rinpung Dzong is also the site of colorful Tsechu when a series of dances are performed by masked dancer in honor of Guru Rinpoche. Some scenes of film Little Bhutan directed by famed Italian director Bernardo Bertolucci was filmed in this dzong.

How to Get to Rinpung Dzong

Rinpung Dzong is located on bank of Paro Chuu, 3km to the town of Paro and 10km to Paro International Airport. Owning Bhutan’s only international airport, Paro can be reached by flight easily.

Paro Airport is well-connected with Kathmandu (1 hour), Kolkata (1 hour), New Delhi (2.5 hours), Guwahati (55 minutes), Siliguri (30 minutes), Bangkok (3 hours), Singapore (5 hours) and some other cities in India in peak seasons. Most popular gateway cities are Kathmandu and Kolkata which both offer about 11 weekly flights to Paro>

Starting from airport, you can get to the small town of Paro within 15 minutes’ driving easily. As you get to Paro town, you can clearly witness the the remarkable Dzong. It takes another 15 minutes to drive there. 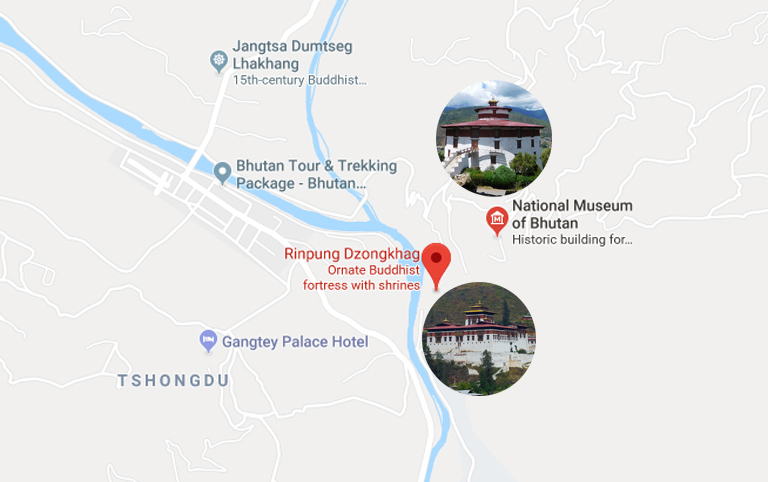 There is a wide-spreading story telling the origin of Rinpung Dzong. In the history, Gyechok (one grandson of Phajo Drugom Zhingpo) traveled to Tibet to study theology. When he came back, he was expelled by his family. He moved to Humrel in Paro Valley and settled down there. Many local deities were summoned by Gyechok and pledged their allegiance to Gyechok. Only one malignant deity called Drelpo Jika still hurt the local people and plundered their properties. In order to protect the properties of villagers, Gyechok subdued him and make the village free of any evils. The villagers asked Gyechok to stay there and decided to build a palace for him. Then, Paro Dzong was constructed by the villagers and the disciples of Gyechok. In 1645, Gyelchok’s disciples recognized Zhabdrung Ngawang Namgyel’s Buddhist power and majesty, so they relinquished Rinpung Dzong to him. In the next year, Rinpung Dzong underwent expansion to a superior fortress. Some of the relics and buildings were destroyed by the fire in 1907, but now they are all renovated according to its original appearance. 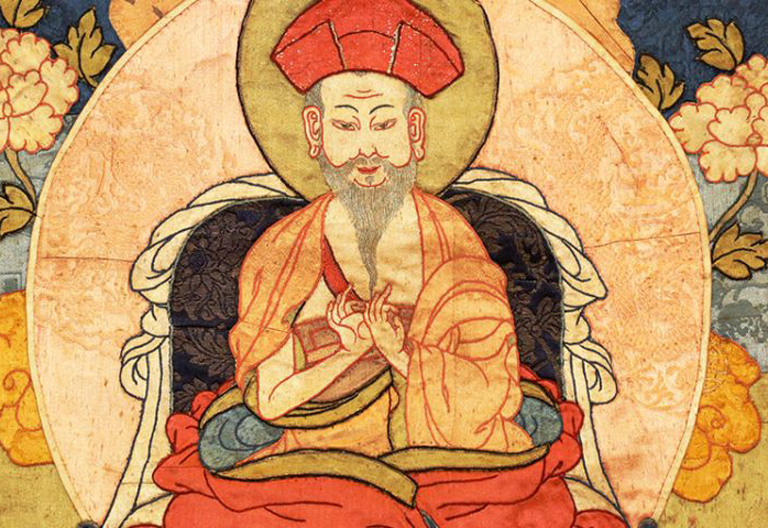 The reasons why Rinpung Dzong is so attractive is that it has great architectures and the treasure artworks (murals, statues and carvings) dating back to centuries ago. The Dzong is amazingly majestic in appearance and architecture. Lots of the wall paintings relay the mysterious stories of long past. The woodworks painted in bright color always make this place warm as well.

Just like any other traditional Dzongs in Bhutan (except for Punakha Dzong), Paro Dzong can is made up of two parts – the front administrative offices and the rear area for Monastic Body. The administrative section is about 6 meters higher than the monastic quarter.

Entering the dzong from northeastern entrance, you can get to the courtyard on the 3rd storey. The inside central tower has five stories and built in 1649. In the east of the tower, there is a delicate Lhakhang dedicated to Chuchizhey, a manifestation of Chenresig with 11 heads. Here you can also enjoy the exquisite wooden carving with golden or black color. The monastic quarter is able to accommodate nearly 200 monks. In the southeast corner, you can see a featured mandala with Bhutanese variation. The prayer hall opposite has pretty murals which describe the life of Milarepa (a Tibetan poet-saint).

According to Bhutanese tradition, dzongs are always built on a hill top or mountain spur. If it was built on the side of the valley wall, a smaller dzong or watchtower would be constructed in the purpose of providing a high and safe place from which a guard can observe the main dzong and surrounding area. At the top of the valley above Rinpung Dzong, you can see a round watchtower which houses National Museum of Bhutan now. It is said that an underground tunnel lead from the watchtower to the water supply below.

There is a large collection of displays in the five galleries, which give a great insight into the cultural and natural treasures of Bhutan. The interesting festival masks cherished in the first gallery are used in various religious dances. You can also learn about the different qualities the animals symbolize. In the second gallery, you can find many delicate thangkas which tell the about Bhutan’s important masters and saints. In the third gallery, there are many statues of gods sculpted by the eminent sculptors in the world. The fourth gallery displays the vivid statues of many rare animals. You must be amazed by the model of the Tiger’s Nest in the fifth gallery. 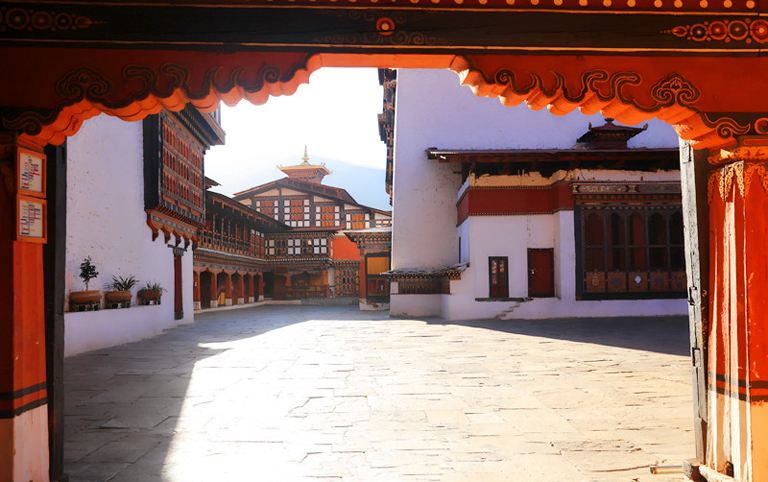 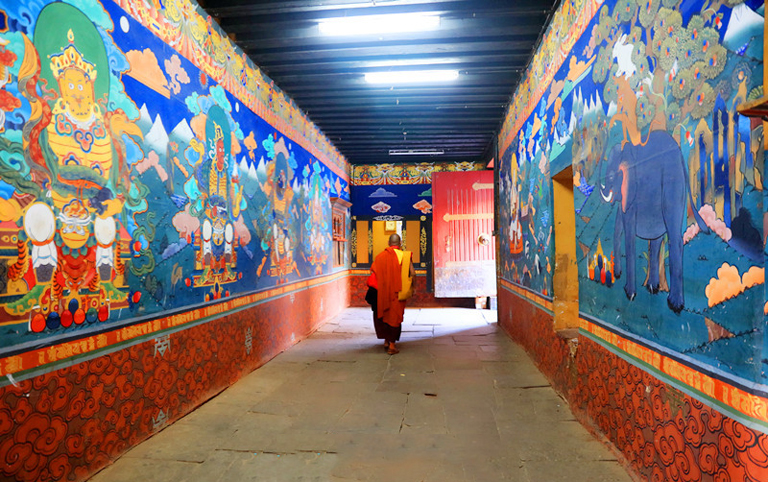 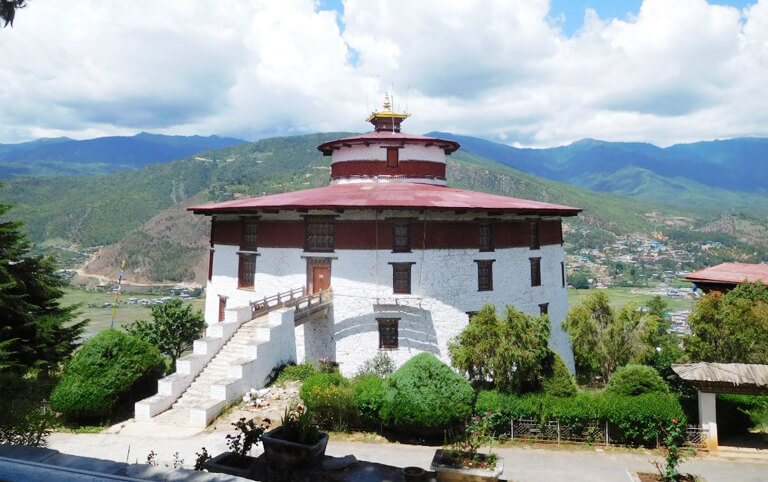 Tsechu is Bhutan’s most dramatic religious festival dedicated to Guru Rinpoche. Paro Tsechu can be traced back to 17th century when Zhabdrung Ngawang Namgyel initiated Paro Tsechu festival together with the consecration of Rinpung Dzong. It takes place from the 10th to the 14th of the second month in Bhutanese calendar. In 2019, it will be held on 17th March. Rinpung Dzong is the site for holding Paro Tsechu.

During Tsechu Festival, people far from the surrounding district will be drawn to Rinpung Dzong to proclaim their beliefs and receive blessings. They always wear their finest jewelries and traditional clothes, male on gho and femal on kira. More than a religious festival to celebrate, Tsechu is also an important social event. People are able to enjoy a reunion with their family, friends and relatives, and sharing their stories to each other. The wonderful ritual dances will be performed by masked robed dancers in the courtyard of Rinpung Dzong. You can fully feel the happy (instead of solemn and serene) atmosphere in Rinpung Dzong. Traditionally, everyone could take part in the last dances called Tashi Lebey which concludes all the performances. Just feel free to follow other people and join the dance.

The highlight of Tsechu comes in the last day when a huge embroidered thangka will be unfurled in Rinpung Dzong before sunrise. This gigantic thangka made by silk and cotton is honored as the largest and finest artwork in Bhutan. In the thangka, you can see the images of Guru Rinpoche and his two wives. Bhutanese call this thangka as thondrols which means liberation on sights. In their faith, viewing this impressive relic will wash away one’s sins. 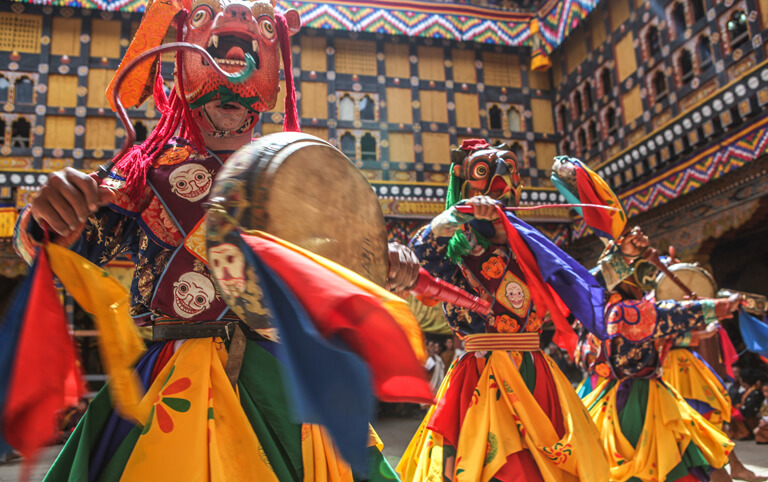 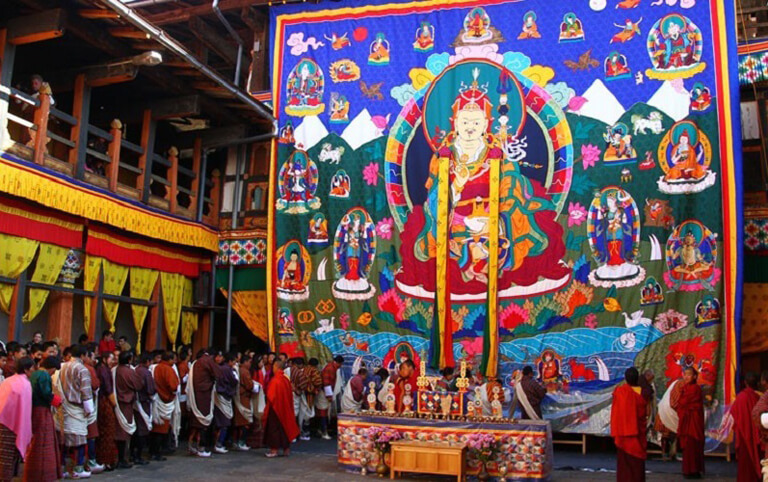 Since Paro enjoy a mild climate, it is available to travel to Rinpung Dzong in different seasons. If you want to extend your Paro tour to Thimphu, Punakha and central Bhutan, March ~ May and September ~ November are the best time to avoid rainy summer and cold winter. The beauty of Rinpung Dzong can be admired both in daytime and at night. In the day time, you can enjoy the majestic architectures of Rinpung Dzong and the rich collections in Bhutan National Museum. At night, it is also a great visual treat to enjoy the beautiful view of Rinpung Dzong when it was lit and looks like bright a palace.

Since Rinpung Dzong is a religious site, you need to show your respect while visiting it. Proper dress code must be observed. You are suggested to wear a collared shirt/sweater or a collarless shirt with full sleeves as a sign of respect. It is also important to walk around the halls, chapels and prayer wheels in clockwise direction. Entering the Dzong complex does not require you to remove your shoes, but visiting some halls inside you will be asked to take off your shoes.

Photos can be taken inside the dzong, but not within the halls or assembly. Before entering the museum, you have to deposit all your belongings in a box at the entrance. In the outside of Bhutan National Museum, you can take some nice pictures as well as the beautiful Paro Valley. If you want to photograph the local people and monks, ask for their permit first.

Visiting Rinpung Dzong during Tsechu will be an enjoyable experience, but you it is so popular that you have to book your flight and tour in advance. Get up early so you can have a good site for watching the dances. The dances performed in Tsechu are rather long. If you don’t want to miss any seconds of the performance, you are suggested to bring enough snacks, water, a collapsible stool and spare batteries for your camera.